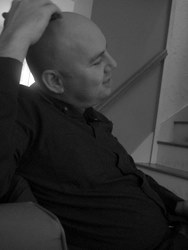 in conversation with the Editors of Full Stop

With the possible exception of Bookslut‘s one-two punch of Jessa Crispin and Michael Schaub, I don’t think there’s a better curator of literary-themed online content than C. Max Magee. For the past eight years, Magee has managed and edited The Millions, where he’s assembled a formidable staff:  a murderer’s row of sharp writers and thinkers, which includes Edan Lepucki, Emily St. John Mandel, and Sonya Chung, and many others. I should add that Magee is also a remarkably generous person who has been enormously helpful to us as we’ve gotten Full Stop off the ground — Full Stop‘s Managing Editor, Jesse Montgomery, and I refer to him as our Obi-Wan Kenobi, and if you know us you know that that is very high praise.

Magee’s latest project is The Late American Novel: Writers on the Future of Books, which he co-edited with Jeff Martin. The editors of Full Stop have spent this week discussing the book at great length, so I’ll try to keep this brief. We’re a pretty tough audience, but I personally don’t think there’s a better resource for finding your own answer to a very difficult question: where is the book headed in the internet age? We corresponded with Magee via email about The Late American Novel. — Alex Shephard

How did The Late American Novel begin?

My co-editor Jeff Martin initially came up with the idea for the book, and he approached me in the early stages as he was gauging the interest of different writers out there.  The future of books was a topic I’d done a lot of thinking and writing about, so I was very
excited when he came to me.

What are the advantages of having writers – as opposed to journalists or publishers – discuss the future of the novel? Are there disadvantages?

Frankly, the business side of this whole thing, which is what the publishers care about and what the journalists write about, is boring. There’s really not much nuance there. It’s all about finding the right business model to navigate through this transition, one that will maximize profits and minimize carnage. But for the writers, this is all so much more interesting. Are they scared or excited? How do these shifts change how they think about their art? Unburdened by shareholders and corporate overseers, what outlandish schemes and philosophical explorations will they entertain?

The essays in the book are divided in approach – some are overtly analytic, taking historical and theoretical positions on the state of the novel, and some are decidedly personal. What do you think these different approaches achieve? Did you set out to represent a variety of critical approaches?  If so, what were they?

The different approaches reflect the different attitudes of the writers toward this topic.  We were looking to get as close to the full spectrum of responses to this topic as we could.  So, we were interested in variety as much as possible. We didn’t set out with a plan beyond that; part of the project was discovering where all these different writers would land on this whole question.

How did you choose the contributors to The Late American Novel? And for what reasons?

We sought out writers we admired and who we believe are doing interesting work. It happened that all the book’s contributors of the book are on the younger side of middle age, which Jeff and I came to believe was an important element of the book. Older writers with mature careers have a lot less to think about with regard to the future of books. They can keep doing what they’re doing and ride out the shifts without engaging with this question in any significant way. However, a writer in her 20s, with a decades-long career ahead of her, has little choice but to entertain ideas about how her work and her readers will be impacted by technology.

What sort of prompt did you send your contributors?

We left it very open ended and very general, and just asked them to give us their take on the future of books at this peculiar moment in the history of the technology.

Do you see the novel as being/having been particularly resistant to change?

For this book, we were less interested in the novel per se.  How the novel as a form is being changed by the influence of technology is fodder for another book entirely, and probably a few dozen dissertations.  What we were exploring was the idea of the word “book” coming to mean more (or maybe less) than that thing with all the pages on your shelf.  When the idea of the book becomes divorced from its previously dominant medium (the way “song” has always just meant song and not LP, tape, cd, mp3) for the first time in many centuries, there are massive implications to that on our culture.

In Marco Roth’s essay “The Outskirts of Progress” he writes, “the crisis of the book is really a crisis of our free will to culture.” What do you think of this claim?

This is what I was just touching on, really. As we discuss in our introduction to the collection, the mass-producable book played a major role in taking humanity out of the dark ages and shaping modern society. So, whether or not you believe this is a crisis, it is certainly worth thinking about.

Do you use social networking websites like Facebook and Twitter? If so, how does being in what Jonathan Lethem calls, “the instantaneous opinion-marketplace” affect your work?

I use them in the context of The Millions because they are remarkable tools for introducing the site to new readers.  Running The Millions, a large portion of my creative output exists only online and, even in the pre-Facebook, pre-Twitter era, was a part of the “the instantaneous opinion-marketplace” as Lethem puts it.  When you are peddling an online product, to be instantly responded to is to exist. For the book, which is mean to be consumed in private and ruminated upon, the potential instant response capabilities of e-readers are something to think about.

While you and your co-editor Jeff Martin penned the introduction to the book, neither of you wrote essays that are included in the book. So we must ask: what is your take on the future of the book?

My only take is that this isn’t a “positive” or “negative” issue. There are a wealth of possibilities that will be both a boon to and detrimental to writing and reading.  Just about the only thing I’m sure of these days, is that there’s never been a better time to be a reader.  Technology has allowed us an embarrassment of access to our fellow readers, to new ideas, and to hard-to-find books. Maybe reading isn’t quite the solitary pursuit it once was, but if it’s more fun than ever to be a reader, I can only think that’s a good thing for book culture and the business too.

A lot of the essays in The Late American Novel showcase affection for books as things. What’s your library like? What’s your relationship with it?

I’m not quite the book fetishist that some of our contributors are, though I do love and cherish many books.  But because I’ve moved many times in the last decade, I’ve had to purge my library many times so that it is now just a few shelves holding a  small but very curated collection.  Perhaps because I fear having to move boxes and boxes of books again, if I don’t really love a book when I’m done reading it, I now usually find some way to send it off into the world rather than holding on to it.

How do you think digital readers will affect the form of the novel?

There are a lot of possibilities here, many that we probably haven’t conceived of.  But I tend to think that we aren’t on the brink of some big shift in the form books take.  Maybe there will be more digital extras and goodies. But the more a “book” might take advantage of the interactive capabilities of the connected world, the less it becomes a “book” and is instead just a plain old video game or related entertainment.  The book is, in a lot of ways, hemmed in by definition by these various other media.  Move the book too far from the current dominant format – text as told by writer to reader – and it quickly enters the sphere of some other medium.

Do you own/use an e-reader? Why?

I don’t though I have tried them and liked using them.  My primary reason for not wanting an e-reader is that I’ve already got dozens of unread books on my shelves and I woudn’t want to be tempted to re-buy them all in e-book format.  But I’m certainly not averse to the idea of reading on one.  If I magically had all my books in both formats, I would probably read books and e-books with equal frequency.