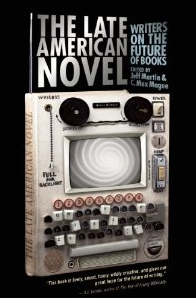 The Full Stop Book Club is a regular feature in which Full Stop editors and guest contributors discuss a book in detail over the course of a week.  Our first Book Club selection is The Late American Novel: Writers on the Future of Books, edited by
Jeff Martin and The Millions‘ C. Max Magee (Soft Skull Press, 2011), and our panel consists of five Full Stop editors – Alex Shephard, Amanda Shubert, Eric Jett, Max Rivlin-Nadler, and Jesse Montgomery.  Our discussion happened (continues to happen) over a long e-mail thread in which we responded to the book and to each other, so the pieces we printed below are not essays so much as shares in an ongoing conversation that will extend from Monday to Friday, with two or three voices represented each day.  Check back for daily updates.
For Tuesday’s discussion, click here. For Wednesday’s discussion, click here.
* * *
Alex Shephard (Full Stop Editor-in-Chief):
x

There’s only one thing that the writers featured in The Late American Novel: Writers on the Future of Books agree on: making detailed predictions (prophecies?) about the future is a damn good way to make a fool of one’s self. Pick up a newspaper (just out of curiosity, when was the last time any of you did this? I think I recall buying — and reading! — the Sunday Times sometime last summer, but I may just be imagining things) or, more likely, go to a newspaper’s website tand the top stories — Japan, Libya, Charlie Sheen — are all things that none of us would have seen coming in early January (well, Charlie Sheen maybe, but uuuuuuuggggghhhhhhh).

Despite the fact that the subject of this collection — the future of the book — is something we, the writing community, like to yak to each other about, it’s a remarkably difficult subject to write intelligently about for a pretty simple reason: if you’re asked to write about the future of anything, the first intelligent thought you will probably have is that 1) you have no fucking idea what the future is going to be like and therefore 2) if you make bold predictions (or even maybe incisive ones) you will probably be wrong (unless you are William Gibson).

One final note in the “what I liked” vein. I’m rather dispirited that my favorite essays in the collection were written by people whose work I already know and admire (Kunkel and Roth, Lethem and Gates, Victor Lavalle, Emily St. John Mandel, Rivka Galchen) and only really liked two pieces two writers whose work I was unfamiliar with — Reif Larsen and Kyle Beachy.

So that was much longer than I wanted it to be! Thanks for bearing with me.

Still living in the graphosphere,

I should begin by saying that I see little evidence that the novel is dead or dying.  In spite of competitive information technologies and the new (though no longer that new) time-wasting demands of the Internet, it is not at all clear to me that people are no longer reading or no longer reading books with pages and covers.  In fact, as Jesse pointed out in his blog post here, more books were sold in 2010 than almost any other year in the past two decades.  But this brings me to another point, one Alex referred to in his comments: when we talk about the future of the book, are we referring to an economic reality, or a cultural one?  Do we mean the future of books-as-objects or the future of reading?  And when it comes to reading, do we mean reading novels, or reading anything at all?  The editors of The Late American Novel don’t offer much clarity or direction; and their overarching questions—“Will books survive? And in what form? Can you really say you’re reading a book without holding on in your hands?”—just don’t strike me as terribly productive ones.

My favorite piece in the collection, an e-epistolary between writers David Gates and Jonathan Lethem originally published in Pen America’s “Correspondences” issue, is also the funniest and most self-deprecating about the impulse to eulogize the book; it begins: “Hey, David.  As I was saying to be 2,472 friends the other day, these certainly are strange times in the history of the boundary between the human persons and the written words.”  What follows is a conversation between two old pros talking about what they know, teaching and craft, with the nimble banter of writers who can’t help but come alive in words.  It’s wry, clever and eminently likeable; it makes no grand claims; and it assumes, as Alex referenced earlier, that in spite of cultural and economic upheaval novels manage to retain a basic function and shape.  Lethem writes:

I mean, I’m no David Shields, but I’ve made my own passing gestures at appropriation, and yet fiction—the old transaction, the old transmission—just seems to springily retake the basic shape that it was put into by Austen and Dickens (a shape only mildly deformed, in the end, by your Becketts and Barthelmes), time and time again.

Lethem and Gates’ essay reminds us that the job of writers and critics is to practice their craft, to do it as gracefully and honestly as possible, in times that are difficult and often inscrutable and the future portentous and bleak.  But not more portentous and bleak than the future has always seemed for writers sensitive to crisis and schism their work cannot help but absorb, writers who lived in times as ordinary and extraordinary as ours, and often under threat of much more imminent danger – Virginia Woolf and T.S. Eliot writing in the wake of the first world war, or, for a more recent example, the 1960s counterculture movement as mythologized by Joan Didion, whose work embodied the modernist aphorism that things fall apart.  To claim otherwise – that the invention of the Internet and the Kindle makes us all of a sudden vulnerable to cultural disintegration – is naïve and insulting.

Editors Magee and Martin don’t quite exhibit that level of hubris, and yet the book does, by omission and by failing to contextualize the issues it claims to examine.  And in so doing it mishandles its subject – books as objects and their significance to us, the novel as a cultural form.  (Benjamin Kunkel begins to begin to address the historical dimension of these issues in a helpful way in “Goodbye to the Graphosphere.”)

For all these reasons, I was also sympathetic to Victoria Patterson’s essay titled “Why Bother,” which suggests (accurately) something of its content. Patterson writes, “I brood over my work rather than the fate of the book industry.” Right.