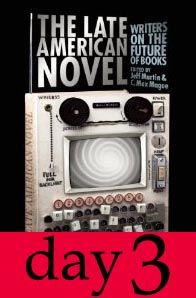 The Full Stop Book Club is a regular feature in which Full Stop editors and guest contributors discuss a book in detail over the course of a week.  Our first Book Club selection is The Late American Novel: Writers on the Future of Books, edited by Jeff Martin and The Millions‘ C. Max Magee (Soft Skull Press, 2011), and our panel consists of five Full Stop editors – Alex Shephard, Amanda Shubert, Eric Jett, Max Rivlin-Nadler, and Jesse Montgomery.  Our discussion happened (continues to happen) over a long e-mail thread in which we responded to the book and to each other, so the pieces we printed below are not essays so much as shares in an ongoing conversation that will extend from Monday to Friday, with two or three voices represented each day.  Check back for daily updates, and catch up on Day 1 and Day 2 of the discussion.
Amanda:

One common thread to our responses (if I may be so bold!) is the attempt to get beneath the rabble-rousing claims about the death of the book, the death of the novel, issues most of us perceive as inflated, underwhelming and unproductive, particularly as places to begin in a discussion about the future of the book.  We also returned to the problem of the problem of the book – is it cultural or economic, about books-as-objects or reading practices?

We’ve tended to focus on reading practices.  Eric and Jesse both put this nicely.  Eric argues that “the novel is an exhausted form” and experimentation with new technologies is not only in order, but the best possible homage to the nostalgic pleasure of reading: “If we are going to commemorate childhood, why not remember the curiosity and the excitement of finding something new, whether novel or novelty?”  Jesse acknowledges that the essays that do the worst job of defining the late American novel or the future of the book are also the essays that truck in the pleasure of reading, “and this question of enjoyment, of pleasure is, I think, fairly critical when we are attempting to consider the future of the printed book.”

I want to know: what conversation do we want to be having about the future of the book?

Max argues that experiments in multimedia storytelling lack infrastructure: “Take any class on creating new media or combining forms and you’ll witness a total absence of focus, structure, and drive.”  How do we build that infrastructure, and who should do it?  Or is fiction really just “the old transaction, the old transmission,” resistant to change?  If it is, is convention a sign of stagnation (Eric), or an element of craft (Max)?

Many of us are uncomfortable with soothsaying, so what’s a better way to frame the conversation?

Eric:
Instead of asking, “What will happen to the novel?” we should be asking, “What do we want to do to the novel?” The pieces I enjoyed most were the ones that attempted to write the future instead of predict it. Reif Larsen doesn’t just talk about what might be done, he does it. He obscures his text with popups; he illustrates his ideas in the margins; and, most importantly, he presents an interesting and engaging argument – one that is stronger for the additions.

I don’t believe, as Max does, that these features necessarily distract from writing. Margins, graphics, and other inventions can add to a story, just as the descriptive objects of conventional realism can. In either case, discrimination and restraint are essential.

While I agree with Eric’s endorsement of Reif Larsen’s piece “The Crying of Page 45,” I tend to side with Max on the topic of the strength (and future) of the novel (the future, much like the past, is now). While Larsen’s essay does indeed engage with, rather than dismiss or vilify, the potential of the e-book, it does so from within the familiar walls of that not-easily-deformed prose. Discussing Julio Cortázar’s Hopscotch ( a choose-your-own-adventure-esque novel with multiple endings) Larsen writes that “the inherently limited interactivity…actually [raised] the emotional stakes of the story.”Although Cortázar was employing a non-linear, hyperlink style stream of consciousness, the very boundedness, or fundamental finite nature of the novel always provided a frame within which the story had meaning. Without such a frame – as Larsen goes on to discuss in his dismissal of early net-literature – the pleasures of reading become diffused and unfocused.

One thing The Late American Novel foregrounds very well is the notion that the limited nature of the book is the source of much of it’s power and appeal. The fact that the book in my backpack, currently Victor LaValle’s Big Machine, will only ever be Big Machine and will only ever have 366 pages (none of which have pictures) makes certain demands on my attention.

An electronic version of the same book would make many of the same demands. I would still be forced to draw pictures of its characters in my head and I would still be sent scurrying to Wikipedia at the mention of Chetwynd shoes. Bracketing discussions of physicality, the same fundamental relationship between reader and book exists between reader and e-book because the latter still exists in a state of mimicry.

Any radical experimentation with the electronic book, on the other hand, would, I think, result in a bifurcation. We would be dealing with books, on the one hand, and some new hybrid medium on the other. Those artists interested in pursuing the novel in its current state will continue hacking away, and those who wish to blaze new digital territory will get to it (howsabout an e- book that cribs your old computer records and uses them to turn all of your shitty AIM chats from high school into a Heloise and Abelard caliber romance?).

This is to say that I don’t foresee any struggle for creative supremacy between the book and it’s electronic follower precisely because I think that if the e-book reaches the level of refinement one could hope for, it’s practitioners would have bigger fish to fry than unseating (or subsuming) its predecessor. At the moment the two are so similar that it’s hard to see their divergent potentials, but as things move along I think we will realize that they are good at doing very different things: the book, at assessing the whole hog of human experience, and the e-book, at doubling as an electronic scale and induction cooker. (Just kidding about that last part, just check out James Bridle’s website for more informed predictions for the electronic book).