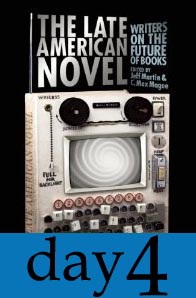 The Full Stop Book Club is a regular feature in which Full Stop editors and guest contributors discuss a book in detail over the course of a week.  Our first Book Club selection is The Late American Novel: Writers on the Future of Books, edited by Jeff Martin and The Millions‘ C. Max Magee (Soft Skull Press, 2011), and our panel consists of five Full Stop editors – Alex Shephard, Amanda Shubert, Eric Jett, Max Rivlin-Nadler, and Jesse Montgomery.  Our discussion happened (continues to happen) over a long e-mail thread in which we responded to the book and to each other, so the pieces we have printed below are not essays so much as shares in an ongoing conversation that will extend from Monday to Friday, with two or three voices represented each day.  Check back for daily updates, and catch up on Day 1, Day 2 and Day 3 of the discussion.

Jesse makes a good point, and one that the best of the essays in TLAN address – wherever the E-Book is going, it hasn’t even begun its journey. Jesse observed, “Bracketing discussions of physicality, the same fundamental relationship between reader and book exists between reader and e-book because the latter still exists in a state of mimicry.” At the moment I’m reading, and loving, Open City, by Teju Cole. Mr. Cole is a talented photographer and illustrator in his own right, whose novel describes with great skill and a perceptive and sensitive eye. Would his novel be enhanced by the opportunity to look at his photographs of the subjects in the novel, or would it be a great disservice to his own writing? Even he notes, “Photography seemed to me…an uncanny art like no other. One moment, in all of history, was captured, but the moments before and after it disappeared into the onrush of time; only that selected moment itself was privileged, saved, for no other reason than its having been picked out by the camera’s eye.” It is the onrush of time that a novel addresses, a permeable sense that neither music, photography, or worse, Youtube videos, with their ever-present red countdown, can provide. The sensation of the novel is different than other media, and its resistance to exist outside of the printed word and the intuitive world is its greatest strength.

A piece of writing that is bordered and complemented by moving images, a section for an ongoing dialogue with the author, a soundtrack, and a comments section, is not a novel. Good writing, just as it found its way into the television studios, will gain a foothold in the electronic world. Soon the Internet and its peripherals will be filled with talented constructions, based in writing, that utilize complementary videos, images, sounds, and moderated participation. But those will not be novels. Those will be a different set of challenges altogether, and should be regarded highly. They might be sold as apps and might even have some of the same creative individuals behind it as a “novel.” But if we are discussing two different forms, which we absolutely are, there is admittedly a distinction between a “novel” and whatever wonderful and exciting concept blend all these selected images.

Some of the greatest novels have used images to powerful effect (I’m thinking Vonnegut’s “asshole”), the most powerful being indirect and illusory. The direct ones fail, miserably (Foer’s “Rising Man”). It’s best not to get caught up in trying to distinguish between a “novel” and a “multimedia” experience. You’ll know it when you see it.

In terms of The Late American Novel, I feel that the hour doesn’t really matter. The authors in the collection all agree that Fiction has never been a prime-time contender. But there will always be a few creative individuals who will step forward to create a piece of art that is without aid beyond its language. Even those, like Mr. Cole, who possess a set of skills that can now be integrated into our reading experience, will look to create a work that only exists in the interior. Others will look to create an experience that connects with our more tactile impulses. Those creators, young and unpolished, did not have a word in The Late American Novel, and it shows. They were probably too busy creating something completely mind-blowing and wholly different than a novel. Something the novelists included in TLAN can only speculate and, worse even, write about.

I don’t buy Eric’s claim that “the novel is an exhausted form” (more on this in a moment), but I am grateful for it. I wish there were more statements like Eric’s in The Late American Novel and less, well, preaching to the choir.

I recently moved into a new apartment, and the first thing I did (after unpacking the truck) was organize my books and put them up on shelves. Home for me has always been where my books are, and I don’t think I’m the only Full Stop editor who feels this way. This goes without saying, but fuck it: I’m sentimental about books.

There are a lot of essays about why we love books is things in The Late American Novel and I dig most of them, because I know about the joys of collecting books, about the sense that your library says something about who you are as a person. And, while I complained about some of these essays in my first post, I’m inclined to agree with a point Jesse made in his first post: that, with the book (potentially) changing, the pleasures of reading are not to be overlooked.

And, again, I’m repeating things a lot of you guys have said already, but everyone in The Late American Novel says books are changing. But if this really is a Gutenberg moment, then I’d argue that it’s not really the time to get sentimental about marginalia or boxes or the smell of paper (and trust me, I’m sentimental about all that crap), it’s time to discuss how fiction can adapt. I keep thinking of something Victor Lavalle said in a recent talk at the 92nd St. Y: “Change always seems bad to someone who isn’t changing.” And it’s important to remember that the book is far from dead. (end rant)

I’ve found the conversation about form to be really interesting, a conversation that I believe is inspired by Eric’s comments about the novel’s stagnation. Personally, I’ve got to give big ups to Max’s last post: “A piece of writing that is bordered and complemented by moving images, a section for an ongoing dialogue with the author, a soundtrack, and a comments section, is not a novel.” Amen. There are already examples of this (I guess it’s called multimedia art?) and I’ve generally found them to be pretty humdrum — mostly because all of the bells and whistles obscure the narrative (if there even is one).  Maybe I’m being too conservative, but I rarely find images to be very useful or interesting in fiction. While I admire Reif Larsen’s essay, I found all the images crowding the margins to be at best, distracting, and at worst gimmicky and pointless. Since reading Tristram Shandy I’ve always found people using images in this way — to make some point about contemporizing the text? — to be pretty strange. Laurence Sterne was doing it in the 18th century in a way that feels fresher than Larsen’s clipart or Foer’s “Rising Man.”

Interestingly, everything I just said is irrelevant when I have an e-reader in my hands. Do any of you own and/or use e-readers? I ask in part because we are young (this too, factors into how we react to all this hocus pocus about the future) and therefore part of the generation supposedly being altered. I don’t own one — although my mom and grandmother do (strangely, most of the people I know that own e-readers are over 50). I think I would like one eventually, but at present, I find I can’t use one. Not only am I unable to concentrate (I read in fits and starts, which is how I read online), but I find the things disappointingly one-dimensional. All you can do is read! I want things to happen when I click on the text! I want videos! I want to write in the margins! (the latter I think you can do) These are things I never even think of — nor really want, when reading a physical copy of a book. The world in the text is more than enough for me when I have a book in my hands, but maybe, just maybe, that will erode if I ever I acquire an e-reader. Perhaps then I’ll join Team Eric.

If you can’t tell, I’m a little grumpy (it’s Mike D’Antoni’s fault — seriously, fuck that guy). But I’ll be posting happy things about why I’ve been recommending this book to people and why everything’s going to be okay tomorrow!