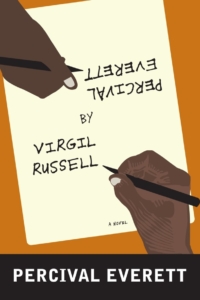 If it is accurate enough to call Percival Everett a satirist, the effect of his satire, which is otherwise uncompromising and thoroughgoing, varies according to the subject and, especially, the formal assumptions at work in particular novels. In 2011’s I Am Not Sidney Poitier, the satire is of a more or less conventional kind in which mocking, often corrosive humor is used for the traditionally corrective purpose of satire — to call attention to and ridicule blameworthy behaviors, attitudes, and prevailing conditions (in this case primarily regarding perceptions of race). In 2012’s Assumption, satire takes the form of explicit parody (in this case, of the mystery genre), a form to which Everett is often drawn.  In these books, the focus of the satire is either the subject addressed or the subject as distorted by genre conventions. Certainly the laughter it provokes is merciless and, at times, bitter, but it is directed at targets in “the world” (genre conventions being a pre-established part of it), leaving the authority of Everett’s own satirical depiction of them more or less intact.

In Everett’s new book, Percival Everett by Virgil Russell, that authority, the authority of the very narrative we are reading (to the extent we can unravel the narrative) is itself questioned, quite deliberately, as Everett takes storytelling, and fiction as a mode of storytelling, for targets of mockery. This quality in Everett’s work, which also characterizes such previous novels as Glyph and Erasure, is most frequently described as metafictional and postmodern, but I think the impulse behind it still best regarded as satirical rather than postmodern per se. While Everett does blatantly and persistently call attention to the artifice of fiction-making, the object seems less to simply complicate the reader’s response to the act of narration and to disrupt the maintenance of illusion than to expose both notions to travesty.  Fiction as a literary form is itself not spared the hard edge of Everett’s satire. Among postwar American writers whose work consistently incorporates self-reflexive strategies, perhaps only Gilbert Sorrentino so relentlessly dismantles the existing support structures of fiction — the novel in particular — as does Everett, although Sorrentino seems more interested than Everett in supplying new such structures, even if they are only temporary, made to fit the specific work at hand.

In Percival Everett by Virgil Russell, Everett does not seem engaged in an effort to replace the blasted remnants of the conventional novel with a fresh form of his own invention. It would be more  accurate to say this novel settles for deforming form as a self-sufficient aesthetic principle. It courts confusion on almost every level: Is “Percival Everett” the narrator who begins the novel by narrating the dream of his “father,” or is it the father? Is the son thus “Virgil Russell”?  Is “Percival Everett” Percival Everett? Is it the latter whose voice appears periodically to remind us he’s in the midst of creating the work we are reading? If the premise of the novel is that is that the two men, “Percival Everett” and “Virgil Russell,” are relating stories to each other, how do we know whose story is which, since the “dialogue” is never clearly demarcated as such? If the stories are emerging as part of a “novel” the father is writing (or is the son writing a novel about the father writing a novel?), why do the characters, their situations, and their actions keep transmogrifying and blending together? Is the story ultimately related of the father’s attempt to escape confinement in his “hospital” the novel’s real story, or is this just more make-believe? What in the world do the photographs in the novel’s concluding section have to do either with the accompanying text or the novel as a whole?

This concluding section finally suggests to us that the father may be in a coma, or perhaps has just died, so that we could choose to interpret the novel we have just read as the spontaneous projections of a dying brain. No doubt some readers who expect formal continuity to be more firmly established, and sooner, will not have the patience to acquiesce to the novel’s apparent disorder until this conclusion provides a kind of retrospective justification (maybe). One suspects, however, that Everett not only anticipates such a response but to a degree expects and welcomes it. The extreme skepticism of fiction’s ability (the ability of all human discourse) to adequately render the truth about human reality that sustains Everett’s satire is surely accompanied by a skepticism of our ordinary ways of reading, which necessarily is expressed by confounding the reader’s expectations, deliberately alienating the reader from these ingrained habits. That Everett’s fidelity to such skepticism would so completely alienate readers who stubbornly cling to their expectation that they reject a novel like this one in frustration is perhaps an acceptable price to pay.

Everett is a prolific writer (by my count Percival Everett by Virgil Russell is his 21st book), so one also must presume he does after all believe fiction has value. Indeed, in Everett’s case that value may very well consist of the opportunity each book gives him to exercise his satirical imagination and to challenge readers to a more active and self-aware reading experience. The very ferocity of Everett’s satire, as well as the relatively rapid rate at which he chooses to offer it, suggests further that he finds no lack of appropriate targets in current American culture (although his interests extend to American history as well) and that their satirical deflation is a worthy object, perhaps one most appropriately undertaken by fiction of a sufficiently adventurous kind. And while Everett’s work certainly does question complacent assumptions about the formal requirements of fiction, this does not fully extend to questioning the validity of his own satirical efforts, thus undermining their rhetorical authority and lowering them to simple exercises in nihilism. At its best, Everett’s self-reflexive mockery and abrasive humor closely approach the line separating productive ridicule and mere negation, but don’t quite cross it.

Those who do grant Percival Everett by Virgil Russell its ultimate formal integrity and follow it through to the end will actually find that the story it tells, however obliquely, and the subject it addresses, however indistinctly, are among the most emotionally engaging, even moving, in Everett’s fiction. In whatever way we choose to identify “Percival Everett,” the character’s plight is treated with considerable sensitivity, at least to the point we find Everett’s depiction of old age and its indignities convincing and compelling. The relationship between father and son, although no more free of regret and misunderstanding than any other, also emerges from the novel’s formal uncertainties as nevertheless genuinely felt, captured almost poignantly in the novel’s final scene:

. . .Twitch a finger here. Twitch a finger there. Fuck with them any way you can. I’m dead, but they don’t know it. Forget the adage let sleeping dogs lie. How about we let dead men die?

You hold my hand

I hold your hand.

I write this for you.

If I wrote, this would be it.

I will always be here.

I know that, Dad. But I didn’t know you knew it.

If this conclusion suggests that genuine human connection is possible, even (especially) in facing imminent death and inevitable suffering, it also thus paradoxically reinforces the judgment that Percival Everett is fundamentally a satirical writer, albeit one of a particularly radical sort. A satirical writer must ultimately believe that the satirical gesture has some conceivable efficacy, that it is not simply an expression of nihilism or despair. One certainly wouldn’t go to Percival Everett’s novels for good cheer and false comfort, but in being often savagely funny they are also balanced by a concern that we behave better, and make such mocking laughter less necessary.