My Way on the Highway

When the giant statue of Jesus was erected at the mega church off I-75 between Dayton and Cincinnati, my friend thought it was Moses. The hair was shorter than most depictions of Jesus, and it seemed more like Moses to be reaching up to the sky, as if asking for direction from on high, maybe for help writing his tablets.

The statue was a confusing, wasteful eyesore. But it fit right in. Not far down the road there’s a giant, equally eye-catching mosque, a display of palm trees made out of lights, and the locally famous Trader’s World horse (which seems to have cut some sort of deal with the palm-tree people). After the novelty of the spectacle wore off, it settled into the landscape and felt at home. We all got used to it. We gave it a nickname — Touchdown Jesus. 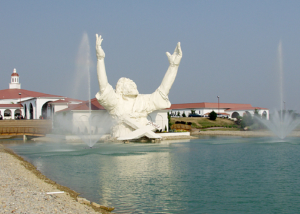 But the visuals were not the only thing executed poorly. It was made of Styrofoam and supported by a metal frame, and in 2010 the statue was struck by lightning and burned to the ground. The metal frame that remained standing was given a nickname, too — Terminator Jesus. 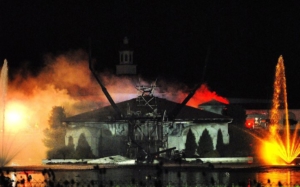 Now, after years with no Jesus statue, the church has built a new one in place of the old. This one is a little more pleasing to the eye. For one thing, it actually looks like other Euro-centric depictions of Jesus. And it’s fire resistant. 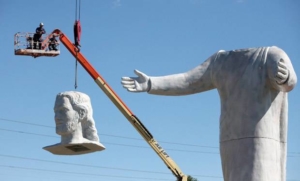 It’s easy to use the statue as an example of the hypocrisy, decadence, and misguided values of the church (as if there were not enough of those already). And in a lot of ways, the statue is ugly. There is a deeply selfish, attention-seeking insecurity on proud display.

But more than anything, the statue and its story illustrate a strong, heartening lack of faith. In a world controlled completely by god, the lightning bolt that destroyed the first statue can’t be chalked up to a simple coincidence (or the fact that the statue was essentially a giant lightning rod). If they really think god is in total control and looking out for the new statue, they wouldn’t make it fire resistant. And, more generally, if they think that god’s awesomeness is such an inherent part of the world, they wouldn’t have to put up a giant statue to remind people. It’s fun to watch such an outdated, weird belief system attempt to keep dragging itself, more and more laboriously, into the future. And it’s nice to think that even something so explicitly religious is wrapped up in the secular.

While it might not make sense from a religious perspective, it definitely makes for an interesting story. It’s I-75’s own death and resurrection. It’s become a part of southern Ohio folklore. These people decided they wanted a giant statue of Jesus in front of their church, and they’re going to have it, no matter what. It’s the story they want to tell, and they’re telling it. You’ve got to admire the determination, and the resilience. Underneath the ugliness, there is a beautiful reminder of how motivated people are to create and maintain their stories (even the bad ones).