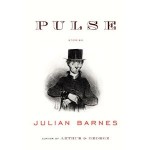 The characters of Pulse, Julian Barnes’ newest collection of short stories, nearly never say what they feel. I think this might have something to do with their shared linguistic and geographic heritage. After all, English is, Barnes writes, a language that avoids all “Gallic flamboyance,” and there is no mistaking that “famous English emotional reticence.” But if you listen closely, beneath this British veneer, this gloss of propriety and order, there is something that cannot be squashed out, relations and emotions, squirming and subtle, so mundane as to be impossible to pin down, to define. Reading Pulse is like being taught how to find a heartbeat, pressing two fingers to the inside of a wrist, feeling around like someone trapped in the dark. It is attention to the barely perceptible throb of everyday life that Barnes brings to his carefully observed stories.

In “Gardeners’ World,” the planning and planting of a garden becomes an occasion for Barnes to elucidate the crack-riddled structure of an eight-year relationship. “Yes, he thought, I might very well leave you,” thinks Ken during a conversation with his wife. This is not because he has discovered she is having an affair, but in response to her cutting down his blackberry bush to make room for a clematis. And let me make clear, this thought reads deadly serious (though perhaps I still haven’t quite acclimated myself to the English sense of humor which Barnes admits “takes a while for people to get used to”). A few lines of dialogue later, however, in response to her suggestion that he buy some straw to protect the vulnerable garden against coming snow, his mood shifts dramatically: “Now, suddenly, he wasn’t cross anymore. If she got greater pleasure out of the garden, let her have it.” Rather than allowing domestic tensions to push his characters over the edge, Barnes leaves open the boundaries between love and hate.

Many of these stories, like “Gardeners’ World,” are about love (getting it, losing it, living with it) but not of the fresh, young variety – more often than not, it is the love of the umpteenth girlfriend, the second marriage, a marriage eight years in. And they are often told from the point of view of the rationally inclined middle-aged male. Flaubert’s Parrot, Barnes’ innovative earlier novel about an amateur Flaubert scholar, is a testament to his ability to write captivatingly about characters through their obsessions. Pulse, in its insistent retreading of issues, proves this once again. He approaches big questions about human relationships and finds no simple answers, but in setting his parameters narrow, he is able to dig deep, forgoing the pyrotechnics of ardor and the convictions of youth for measured uncertainty and emotional ambivalence. In so doing, he provides himself the opportunity to portray the constant, private shifting of emotions that is seldom attended to. Stakes are raised and narrative force is gained at the subatomic level.

In each of the pieces that comprise Pulse, Barnes draws the reader’s attention to the quiet dramas of the everyday, as if to say, this too is worthy of our consideration- “Later, when we look back, we will fetishise and celebrate the first date, the first kiss, the first holiday together, but what really counts is what happened before this public story: that moment, more of pulse than of thought, which goes, Yes, perhaps her, and Yes, perhaps him.”