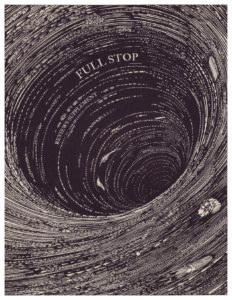 This is the introduction to Issue #4 of the Full Stop Reviews Supplement. The issue includes some of our favorite reviews from the first half of 2018. These pieces capture the encounter of readers drowning with strange, marginal, and beautiful works of contemporary small press fiction. As a special feature, the issue also includes the creative output of an online book club convened by black feminist performance artist and writer Gabrielle Civil in response to Jia Qing Wilson-Yang’s debut novel, Small Beauty.

As usual, the Reviews Supplement can be downloaded for an optional donation. Full Stop is run by a volunteer editorial collective, and all donations will go toward helping us pay more writers and artists. Download the issue here.

Every good reader properly desires to drown, but if the poet drowns, he will become only a reader.

—Harold Bloom, The Anxiety of Influence

The special feature for this issue of the Full Stop Reviews Supplement documents the creative output of an online book club convened and facilitated by black feminist performance artist and writer Gabrielle Civil. Over a series of months, members of the group read Jia Qing Wilson-Yang’s debut novel Small Beauty (published by Montreal-based Metonymy Press in 2016), conducted online conversations in response to the reading, and then each group member created and shared a “small beauty” of their own. Small Beauty tells the story of a mixed-race trans woman living and mourning in a rural Canadian town in the aftermath of her cousin’s death. Yet even as the narrator seeks out solitude to process her grief, finding her way, for example, out alone to the middle of a lake in a canoe, she is confronted again and again by the relationships that influence and shape her personal identity: her queer community, her family history, her experiences of trauma, rooted in racism and transphobia.

Mirroring Small Beauty’s concerns with the intersectional and inter-generational nature of identity, the members of the book club exuberantly perform poetic influence. This is perhaps most clear in Hannah Ensor’s procedural notetaking, which allows Wilson-Yang’s language to “echo (probably not coincidentally) themes + problems + possibilities that I’m currently at work with.” But each writer experiments with their relationship to Wilson-Yang’s novel, allowing the book’s themes, concerns, and style to permeate their own. Kris Mason builds an altar to achieve “some kind of connection and healing with the dead.” Sarah Hollows writes a letter to her aunt, whom she never had a chance to meet, to ask about “what sort of relationship we might have had.” And in their visual works Aisha Sabatini Sloan and Yolanda Wisher use found materials to explore lines and lineages. Ching-in Chen writes “it was a family lineage to sprout wrongly and loudly,” and in these textual responses the messy sprouting of chosen and unchosen filiation is rambunctiously explored. As Civil writes in her contribution: “So together, we become everything. Now and then.”

In this, the Small Beauty Book Club offers a queer alternative to Har- old Bloom’s poetic family romance as described in his . . . influential . . . study The Anxiety of Influence (1973). There, Bloom introduces a theory of poetic history as an Oedipal battle between father and son. As he de- scribes it, all “strong” poets (by whom he means, primarily, canonical, male, post-Enlightenment poets) create by finding an opening in the work of a precursor, a place where that father falters and the new poet can succeed. Through this fault-finding, an act of creative misreading, the poet seeks to deny influence, and thus to father himself, to create an original work of art. At the heart of this anxiety of influence is a desire for autonomy, and a fear of being shaped by someone or something else: a fear of drowning. But, drawing on a different lineage of reading that is part Oprah and part Audre Lorde, the members of the book club do not anxiously reject, but instead exuberantly performs, poetic influence. Rather than the threatening father, the book becomes a relation: friend, a mother, a lover, a rock, a house, a tree, a mirror, a body of water.

As in each issue of the Full Stop Reviews Supplement, in addition to our special feature, here we collect some of our favorite recent reviews. These pieces, originally published online in the first half of 2018, capture the encounter of readers drowning with strange, marginal, and beautiful works of contemporary small press fiction. They demonstrate what book critics can learn from acts of creative reading, finding in them an image of criticism as creative practice. Often, book critics, like Bloom’s anxious poets, seek a vantage point apart from their object of study, armed with a bit of ego and a sense of authority. They attempt to orient and guide their readers, placing each text in a field, diagnosing the lines of influence, measuring each against each. This writer is a Nabokovian metafictionist. This one a Woolfian interiorist. This other a Dickensian social realist. And this a Gilbertian eat-pray-lovist etc. But the lines of influence, Wilson-Yang and her respondents show, and the criticism we publish at Full Stop continues to explore, also grows up out of the page and into the reader. And any properly reflective criticism of contemporary writing, one attentive to history, identity, sociality, and the economy and ecology of aesthetic production, must take account of this fact.

Read the rest of the issue here.