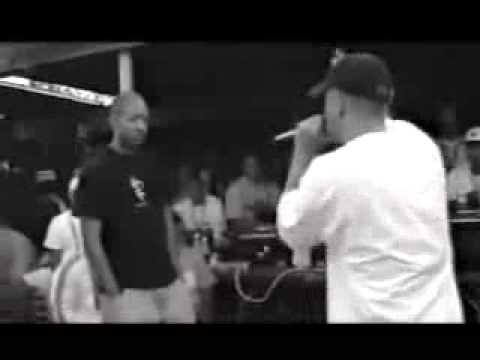 Hip-Hop has always been social. Its core elements — DJing, MCing, graffiti, and breakdancing — emerged in response to social situations and are, largely, about creating social responses. MCs doing call and response with a crowd, DJs mixing and re-imagining songs for listeners, graffiti that comments on and changes its surrounding environment, and breakdance crews that battle each other are all social at their core—designed to be encountered and absorbed by other artists and by the public. That’s why the concept of a hip-hop festival, where people can gather to engage in and celebrate the culture and its elements, makes so much sense.

But even though hip-hop had been thriving for decades, it wasn’t until 1996 that Scribble Jam started its 13-year run, becoming the largest annual Hip-Hop festival of its kind in the U.S. (The Chicago Tribune called it “Hip-Hop’s Woodstock”) and a place where the best practitioners of Hip-Hop’s forms came to engage in competition. Beginning as a release party for the Cincinnati-based and graffiti-oriented Scribble Magazine, the initial 1996 event, according to newspaper reports, drew about 100 people in addition to some local artists.

One year later, in 1997, the landscapes of Hip-Hop and popular culture were changing. In 2014, when so many elements of Hip-Hop have become intertwined with popular culture, it’s easy to forget that it hasn’t always been this way. Arguably, 1997s release of No Way Out — Puff Daddy’s debut album and accompanying large-scale concert tour —- helped catalyze Hip-Hop’s movement toward the mainstream. That same year, Scribble Jam’s promoters decided to grow the event, making it into a “full scale production.” They “spread the word hard and heavy. It was in all the trade magazines and all the record labels knew about it and supported it in one way or another. We had booths setup for vendors, more than last year, we had magazine coverage, and enough record label promotional material to choke a horse.” As a result, the event grew, attracted more talent, and became what one organizer called “a story book Scribble Jam.”

I wasn’t at the 1997 Scribble Jam. But two years later I bought a ticket and, with a car full of friends, went on a gorgeous summer day to Annie’s, the local venue where the even was held. All around the perimeter, graf artists worked crafting incredible pieces, one flowing into the next. Inside, I watched a breakdancing battle where the competitors moved with impossible control and ease. One b-boy spun on his head for so long — just his head, no hands — that spectators, having no other way to process this incredible feat, burst into cheers and laughter. At a vendor’s booth, I picked up a tape for $5 with simple white lettering across a black background. The tape was by a group from Columbus called the Lone Catalysts, and they’ve remained one of my favorites ever since. When it came time for the MC battles, which were held indoors, I was told to leave. No one under 18 was allowed inside the bar area where the stage and microphones were set up.

So what, exactly, made Scribble Jam 1997 so great? For starters, the fact that it took place in Cincinnati — a mostly conservative city — meant that Midwestern practitioners and fans of Hip-Hop finally got a chance to feel recognized and appreciated, particularly by members of the audience and artists who made the trip from other, larger cities. Via the event’s vendors, underground labels and burgeoning artists got a unique chance to reach a larger audience (alongside some bigger names) and to distribute their tapes (yes, tapes) and showcase their skills face-to-face with new audiences.

There’s also the stuff of legend: then unknown MC Eminem’s presence in that year’s freestyle battle, where he lost to MC Juice, would eventually help solidify Scribble Jam’s status as an influential magnet for talent (some homemade footage is available on Youtube and is worth watching). Just two years later, the world was introduced to The Slim Shady LP, and Eminem would become a household name, so there’s something incredible about seeing him practice his skill without any of the slick production values or polished collaborations that that would come to characterize his career as a pop artist.

Scribble Jam 1997 might also represent an event-horizon. It was perhaps one of the last times Hip-Hop’s elements were on full-display for engaged, appreciative audiences before being mostly cannibalized by commercial interests, stripped bare, and forced into mainstream consumer-culture. Many of the sites once seen at Scribble Jam, and which are parts of Hip-Hop culture across the U.S. and across the globe, have been separated from their social landscape. Seeing break-dancers in the background of a music video isn’t the same as seeing how they communicate with their bodies in person and the joy they can bring to amazed onlookers. The culture of freestyle battling that was so heavily represented at the events is now mocked by people who, no matter how justified they may be in their sharp and hilarious critique of the ways in which the practice has become stale, haven’t ever watched and listened as rappers deliver rhymes so biting and immediate that they leave crowds stunned.

The waning interesting in Scribble Jam, which eventually led to its disintegration due to lack of funds after a twelve year run, seems to signal a much larger cultural shift away from the communal and toward the individual. And that’s fine. We’ll still have the memories. Despite the fact that interest seems to have shifted away from the social aspects of Hip-Hop culture that Scribble Jam did so much to cultivate and celebrate, one of the event’s original founders, Nick Accurso, along with Cincinnati native Mr. Dibbs, is trying to raise money for a 2014 event via kickstarter. I wish them luck and hope there will be many more memorable Scribble Jams — powerful, communal events where Hip-Hop’s true potential was on full display. But no matter how uncertain the future of this event may seem, Scribble Jam 1997 will always have a place among the greatest parties in history.