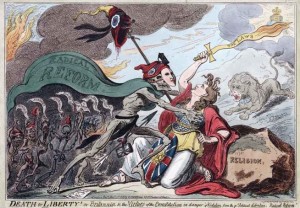 Although I have developed an appreciation of warm, flat beer, meat pies and trashy newspapers, and I can now differentiate between a Scottish and Liverpool accent, I do not feel that I’ve gotten a very good sense of Britain in the four months since I moved to London for graduate school. And so, seeking to understand this place a little better, I did what I sometimes do when I’m not sure what to think about something: I turned to George Orwell.

I went to my university’s library and took down a volume of Orwell’s essays that includes “England Your England,” which he wrote in 1941 during the Nazis’ bombing campaign on London to try to better explain the British character in the context of World War II. (The first line of the essay establishes the context with no uncertainty in a classic Orwell style: “As I write, highly civilised human beings are flying overhead, trying to kill me.”)

Orwell paints a very clear picture of what he believes British people are like: They have bad teeth and like flowers; they do not excel at the arts; they like privacy and have faith in the rule of law; they are not militaristic; they are very attuned to social class. Over the past week or so since I picked up the essay, I asked a number of British friends and acquaintances — over pints of warm ale, of course — how they think Orwell’s descriptions measured up against their understanding of their countrymen. I was surprised to find very few disagreements. But does that mean Orwell’s characterization is still relevant today?

When opining on English “insularity” and “xenophobia,” Orwell writes, “Nearly every Englishman of working-class origin considers it effeminate to pronounce a foreign word correctly.” This struck me as especially funny because I’ve discussed several times the idiosyncrasies of British pronunciation with non-British friends. (See, for example, the name for a boneless cut of meat, which ends with a hard T.) But I happened to read that line the same week that Britain’s newest census data was released, revealing that around 1 million UK residents don’t speak English, with about half of them coming from Poland. Surely, I thought, they can pronounce foreign words — as can the Bangladeshi family that lives below me, or the Turkish man from whom I buy my fruit and vegetables. The Britain that Orwell describes so well is one that existed during World War II, before the waves of immigrants came to this grey island from its former colonies during the post-war years and then again in great waves from the 1980s until now. For many Britons now — one in eight was born overseas — Zadie Smith’s depiction of Pakistani-, Jamaican-, and Irish-Brits living in council estates has more resonance than Orwell’s lines about “old maids” on country lanes “cycling to Holy Communion.”

Which is not to say that “England Your England,” and my conversations with English people about it, didn’t help me to gain a better understanding of the country. The new census data played into the fears that many in this country hold about diversity. The Daily Express, a conservative tabloid, ran with a banner headline: MIGRANTS SHUN THE ENGLISH LANGUAGE. Meanwhile, the current government is actively trying to discourage immigration from new European Union members like Bulgaria and Romania with discouraging advertisements. The Conservative party has been pushing immigration reform aimed at “getting immigration under control,” while far-right anti-immigrant groups are becoming something of an electoral challenge.

The essentialist description of Englishness in “England Your England” is nationalistic and tinged with chauvinism even if many people find it accurate. But it’s that proprietary sense of what it means to be English that has people upset about the changing character of their country. If Orwell were alive today, what side of the immigration debate would he come down on? His commitment to democratic and egalitarian politics is well known. So is his patriotism. Would George Orwell’s defence of Britishness put him into the same camp as the right-wing British National Party?

The copy of Orwell’s essays that I picked up was published in 1953 and has been hanging around the library for a while. Toward the beginning of “England Your England,” while he is about to set up his description of the English character, Orwell writes, “Things that could happen in one country could not happen in another. Hitler’s June Purge, for instance, could not have happened in England.” One previous student who took out the book circled the sentence and scribbled in the margin, “Rubbish!”