The United States has been engaged in a constant war for the past ten years with no sign of slowing down. The drone war is not exactly a secret, but it’s not a hot topic in the national conversation, either. The drone program is rarely mentioned by politicians and while some journalists in the mainstream media have done impressive work documenting and exposing the drone war, the day-to-day of targeted assassinations rarely makes the front page or the evening news. “That secretive program in which unmanned robots controlled from trailers in Nevada swoop down and deliver death to suspected terrorists on President Obama’s ‘kill list’ in lawless far away lands?” Americans seem to be thinking, “Yeah, I guess I know that exists.”

This obliviousness is, of course, by design. Among the benefits of the drone program for the military and intelligence services is how easily the general public can ignore it. The national security apparatus is able to defeat America’s enemies — killing around 3,000 people, including between 473 and 889 civilians, 176 of whom were children — while having a minimal impact on most Americans. With the exception of a very small handful of traumatized drone operators, most Americans don’t face any consequences of the drone program. Drone warfare allows Americans a near complete divorce of the state’s violence from human reality.

But recently online activists have undertaken attempts to use social media to rattle American complacency on the issue. On Dec. 11, Josh Begley, a web artist and NYU graduate student, started @dronestream, a Twitter account chronologically tweeting every reported US drone strike in Pakistan from 2002 until today. Begley told The Daily Beast that the project is “about the way stories are told on new social-media platforms.”

Looking at @dronestream’s page succeeds in creating a striking narrative through social media. Viewing the different strikes in a long stream turns the “national security” imperative into a narrative story about assassination from above in Pakistan. Patterns emerge: Jan. 2010 was a particularly intensive month for strikes. Cites are often hit multiple times in a row. Ten is an average number of people killed. Is the end of the month more prone to drone strikes than the beginning?

Aug 14, 2010: 26-year-old Sohrab, who was leading evening prayers during Ramadan, was killed with 13 others (Pakistan) guardian.co.uk/world/feedarti…

But Begley’s project is about more than experimental story telling. It is also to remind @dronestream’s 19,000+ followers of what is going on. The tweets jump out among the endless stream of stream of news and commentary and online snark, a jolting reminder of incidence of state violence. “The central question is about access and information,” Begley said. “Even if we have access to the data about drone strikes, do we really want to be interrupted by it? Do we really want a twitter feed that is going to show up in our other communications and annoy us with this heavy data?”

James Bridle, a technologist and artist, took on a similar project before Begley began his. In November, Bridle launched Dronestagram. With Dronestagram Birdle takes information on US drone strikes in Pakistan, Somalia and Yemen published by the Bureau for Investigative Journalism and uses it to locate the strike sites on Google Maps. Birdle then takes the images of the strike location and puts it into Instagram, sometimes applying the program’s nostalgic and dreamy filters to make photos look retro. The result is often haunting. An ambiguous little square of digital imagery — what is that? a farm? a hill top — that the viewer knows contains death.

Like @dronestream, Dronestagram is a simple reminder of the ongoing war, but it is also more. Bridle explains on his blog: “The political and practical possibilities of drone strikes are the consequence of invisible, distancing technologies, and a technologically-disengaged media and society. Foreign wars and foreign bodies have always counted for less, but the technology that was supposed to bring us closer together is used to obscure and obfuscate. We use military technologies like GPS and Kinect for work and play; they continue to be used militarily to maim and kill, ever further away and ever less visibly.” 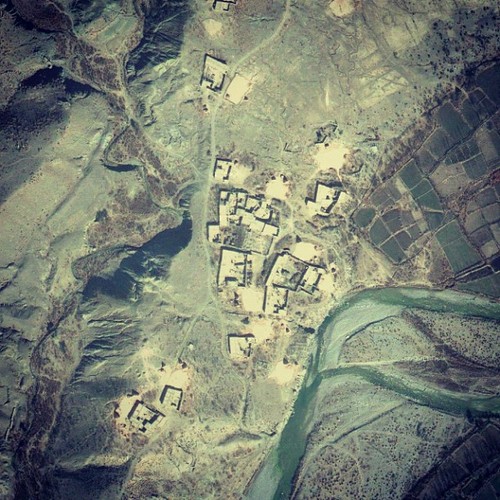 The images — a small hut surrounded by a fence somewhere in the barren desert of northern Yemen, for example — help to turn the drone strikes into a concrete reality, something that can be seen and situated in real space. In doing so, Bridle helps to recontextualize drone strikes as something that occur in material reality, precisely what Americans are supposed to ignore.

So is this kind of online activism effective? The efficacy is impossible to measure. The nature of social media means that while anyone can access Bridle and Begley’s messages, the reach is in reality much smaller. You have to sign up to follow @dronestream on Twitter and have your personal feed punctuated by the history of drone strikes from 2002 to 2012. The “average” person isn’t necessarily going to be affected by it. And it would easy to dismiss Bridle and Begley’s projects as some kind of “clicktivism,” that simplest activism where a re-tweet to your 800 followers feels like a revolutionary act.Dronestagram and @dronestream won’t have the effective capacity for changing Americans’ relationship to the ongoing war that, say, hundreds of thousands of returning veterans or a looming draft did during Vietnam. But in a digital age of digital warfare fought (on one side, at least) on computer screens, a reaction on computer screens is only natural. Moreover, social media is where many Americans construct their understanding of global affairs and current events, making it a natural place to fight the ideational battle against the drone war.