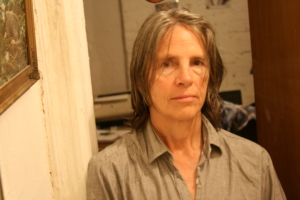 Eileen Myles is the author of many books of poetry and prose, including Not Me, The Importance of Being Iceland and Inferno. Her most recent book of poetry, Snowflake/Different Streets, was published in April by Wave Books.

I think literature can’t help it. Isn’t literature living? The thing about responsibility isn’t that it’s a burden or that someone’s making you read or write something you’re not interested in because you feel you are morally obliged. I think as writers and makers of literature we operate chiefly as organisms and a popular upheaval must always upheave us as well. And I think of George Bataille’s great novel The Blue of Noon which was totally about the Spanish American War only his characters were drunk and staggering through it and bullets were zinging in the background. There’s no rules about how we engage with the popular upheavals of our time and I like that fact most of all.

I do think I’m writing for a definite audience but I don’t know who they are. My writing goes right out of my control the second I publish it so it could wind up in anyone’s hands so I’m kind of writing for them. I suspect misogynists and homophobes are not a big part of my audience and I suspect that if you believe in “excellence” you won’t read me either. I’m not writing “quality” literature. I’m aiming for something a little more insidious than that. The “grown” “contracted” part of your question is harder. I think serious reading is more important than serious writing. I think a serious reader reads widely and is wildly unpredictable. Maybe I think publishing has grown more conservative and is less likely to like something that doesn’t remind it of something else, or has not been proven by its travel through the plumbing of the award systems and the proper educational institutions to be “of value.” I think how we determine literature’s value is the big problem. Most bios are a list of awards. That’s become the only describer in just thirty years. That’s crazy. I think readers are given less opportunity to trust themselves, are normally allowed less exposure to surprising shit, whatever that might be, certainly by the bigger publishing companies so I think readers are a little starved by the paucity of choices on the table in the store and so we need new formats like e-books and independent presses more than ever. The newer and smaller forms are the truest response to a tightening and writhing situation.

I am deeply moved when I feel my work gets written about smartly and “in depth.” I’m shocked and hurt when I get slapped. Is that value. I think there’s plenty of love and controversy and intelligence on the internet. I think reviews are easier to find and to read now. So there’s really a lot more writing about books today though it’s true that since this writing about books is not in a general interest publication these reviews and mentions don’t always attract the grazing reader. You don’t read them by accidentally flipping the pages. But EVERYTHING’S changing. I think live events are taking the place of publications and people who organize events are increasingly putting literature next to art, and next to music. And next to politics. OWS very quickly had an amazing library because we have a political movement that knows that we are being isolated in every way, not just in terms of books getting reviewed. Books being seen and used and companioning us in our struggle is part of the solution. Do we have time for activism. Then we will need books. We are all becoming aware of being overly shuffled into one audience or another. Everything’s done that, not just the end of print literary reviews. And everything’s pushing back against it too.

Have you found it possible to make a living by writing the sort of thing you want to, without other work?

Are you kidding? Well the answer is yes. I do think it’s possible to make a living doing my writing but you have to be willing to live badly which I frequently do. There’s lots of blogs to write for instance and oddly even if they “pay” you you have to wait longer than ever before. While everything’s electronic pay checks are moving slower than ever before. You could blame the post office but I blame politics for that too. Increasingly though the belief is that you must be an academic or a publishing heavy if you are writing about books and you are obviously making your income elsewhere or else you are new or young or wealthy already and are just now climbing into prominence and need the “exposure.” So there’s less respect than ever for the idea that a writer or even a aloud reader of her work needs to get paid. There’s much shame about $ and that during an economic downturn. I find this trend to be deeply immoral. So the desire to make a living as a writer is a true perversion in this culture but I think we need our perverts more than ever. I think in the same way that curators and event organizers have to think more widely to mix audiences we writers have to think more systemically about what a writer is, and how one genre opens into another as do readers and audience. We’re making our living as writers in this same new world. How does each piece I write relate to the whole I’m writing, or creating in time. Rather than simply thinking about who’s paying me I have to think of the whole life project. And you need to say no to a lot of stuff. Events and invites in order to make some real time to think the whole big picture through. So you need a lot of courage and imagination and stupidity — and trust — that since the culture needs you it will support you. It must. It’s a crazy notion but I think it’s true and we make it true by acting on it. To be a working writer is a political act.

Do you think there is a place in our current economic system and climate for literature as a profession?

We are crucial. We are pure media.

I think we are all bobbing in a myriad of affiliations. People tend to let them blur or privilege one over the other to move more quickly either in the reader’s mind or the culture’s yet I think it’s always most interesting when someone throws a wrench in the direction you (the reader) thought you were going in order to highlight this fact that few of us are simply this or that and all the mix is informing our choices inside and outside the writing. I do tend to look at what’s NOT getting represented in the writing mainstream and let that bubble up in my writing. It’s back to responsibility again. I’m not required say to speak as a lesbian but if that speech is not getting aired then it’s a kind of visceral urge to give room to that world of association as my material. Yet I feel duty-bound to complicate that banner too, because though I’m ultimately unable to dissuade someone from forever after pegging me as a dyke writer I can and do affiliate in many other ways aesthetically, or class-wise, and so on. It’s the same old question. Is it only straight white men who get to be themselves and not be described as having allegiant content. Is it still men who DON’T do gender in the eyes of readers and publishers. It seems so old fashioned and the writers I care about are ahead of and outside of all that for sure.

Scared, passionate, apocalyptic, stingy, paranoid, lush, risky, safe. I’m increasingly interested in doing long versions of the things I used to think I was just doing for money. Essays, etc. I think an essay could be a book and I didn’t always know that. Anything can come into an essay, especially the political day. Poetry is more important that ever before because of its short broken space. It fits.

I think the very thing of the American language has become a suspect thing. Our “new” language in the 20th c. has now become the oppressive tool and I think it’s an onerous burden for each one of us to be writing in something that has become in many ways the business language of the world. It makes me think that writing is inherently conservative and affiliated with currency itself. It’s a strange problem. How to write outside of this sense of things seems to be a pretty big problem for most writers today. Yet I think we have to keep opening ourselves up to the enormity of how language can also make new connections between states of mind and bodies of information and cultures that would not normally touch. The writer is the party-giver, the party maker. I think it is my responsibility to not be writing for any particular anyone so that I can keep negotiating the gaps between moments that often feel ponderous or eternal but as time often proves are quite fleeting. I think I’m responsible for not taking my time so seriously, but to frankly manage this passage and my place in it, moving smoothly and shaking its parts as much as possible.