Quebec Students Prefer Not To 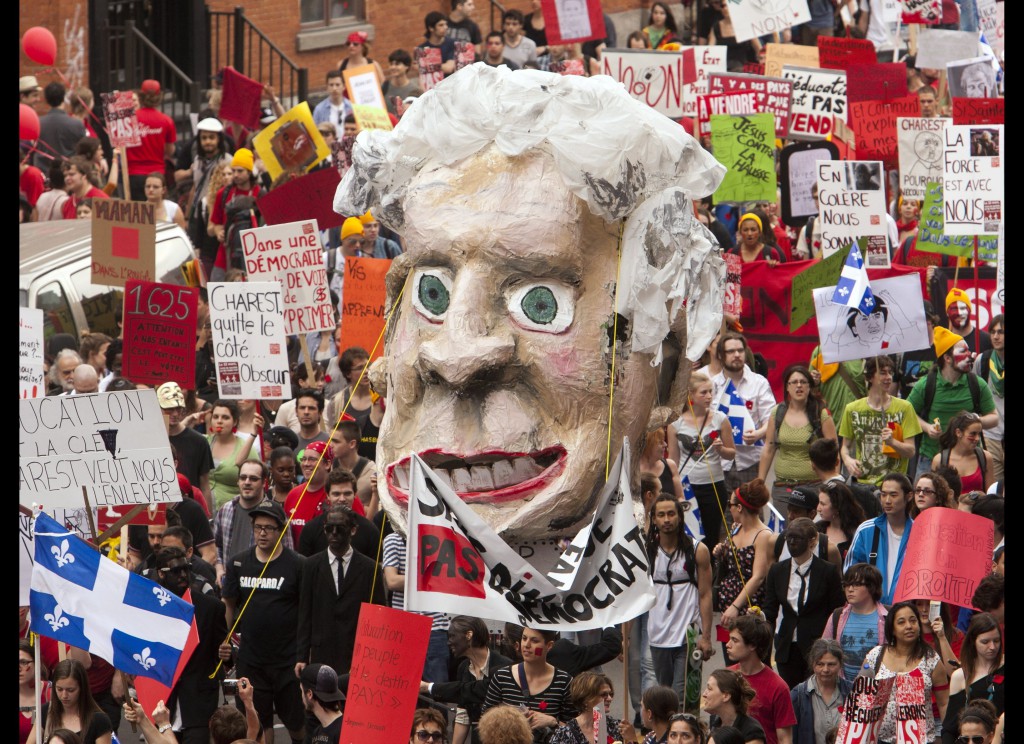 When I received my MA from McGill University (Canadian humblebrag, which is accompanied by the obligatory “sorry”), my fellow graduate students and I were on strike. At issue were some concrete problems pertaining to our work as teaching assistants (we wanted to limit course sizes, make sure we weren’t overworked by professors, etc.), but during our union meetings some of the more radical students wanted to push the matter further, calling for a broad accounting of McGill’s academic, administrative, and most importantly, financial priorities. Making sure that we weren’t doing more work than we were compensated for was certainly an important goal, but they argued that we would end up in the same place a few years down the road if the broader push to casualize academic labor was not called to account.

Recent events in Quebec — the latest in a series of escalating student movements that began in London and California and flowered into national movements like Chile’s — proves that these students may have been on to something. As of now, 180,000 students across the province have been on strike for six weeks, nominally resisting a planned tuition increase of $1,625 (the strike is referred to as the “Non 1625” campaign). Quebeckers pay scandalously low tuition relative to other Canadian provinces, and the American comparison is too depressing to make. But the argument of the students of Quebec goes far beyond bowing to the cold economic realities proffered by state and provincial governments, who claim that public money for education is simply not there. It is this claim that the students are challenging, basically saying, Well, if it’s not there, go out and find it before immediately turning to us to make up budget gaps.

Take, for example, the terms of the stalemate students and the government has reached, as reported in the Montreal Gazette:

“The government has repeatedly said it would not enter into negotiations with students until they accept a tuition increase. But students insist one place they could start is by discussing the financing of universities and, in particular, the lack of accountability that has led to some financial disasters such as the Université du Québec à Montréal’s $510-million Îlot Voyageur campus.”

The strike is entering a crucial period, as the whole semester is imperiled if some sort of resolution that returns students to class is not quickly reached. But if the students are to remain committed to a broad accounting of their universities and the systematic push to offload public expenditures onto individuals (more and more through student debt, a topic we will be revisiting soon at Full Stop in an interview with Andrew Ross), then it’s hard to see the issue being sorted out any time soon. In the meantime, we are all in the position of most Canadians: Quebec is often an object of bemusement and derision, but these feelings are always accompanied by a feeling of envy that is difficult to suppress — especially at moments like these.