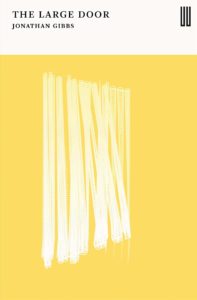 The Large Door is a male-authored novel about the erotics of pedagogy, and it is very good indeed. Please bear with me: the amorous couplings here are mature adults — the pedagogy in question being of the postgraduate variety — and their flirtations are mostly of the will-they-or-won’t-they kind, meaning the book is not, to use the current parlance, particularly problematic. And yet it probably says something about the contemporary cultural moment that Jonathan Gibbs’ sanguine and emotionally generous rendering of workplace sexual frisson feels just as ever-so-slightly anachronistic as the midcentury elegance of his prose style, with its playfully clever third-person narrator redolent of Muriel Spark, all wry knowingness and winking mischief. Perhaps it was out of deference to the post-MeToo zeitgeist — or some reductive reading of it — that the larger publishing houses passed on this smart, deftly crafted, funny and perceptive novel.

Jenny, a linguistics scholar, is 41 years old — “an age of . . . strange and desperate disorientation.” She attends an academic conference in Amsterdam in honor of a linguistics doyen called Leonard. Leonard is dying of cancer, and taking it in good humor: “Contingency and desire is very much what I’m about at the moment. When every day might be your last you tend to find every gesture, every action, has the ring of contingency about it . . . I’ve honestly never felt more subjunctive in my life.” Jenny’s role at the conference is to give a speech introducing Leonard, who had once, many years ago, made an unsuccessful pass at her. Upset and unsettled by the news of his illness, Jenny perversely wonders whether, “if she had slept with him, that one time, his death might be in some small way diminished.”

The “large door” of the book’s title is the one that leads to the afterlife, and the omnipresent sense of looming mortality adds fresh urgency to Jenny’s midlife crisis: “It seemed to her, now that she only had the energy left for one distinctive and decisive act, to realign her life to its true course and give the faith and energy needed to pursue it.”  This nexus calls to mind Quentin Crisp’s oft-quoted line about the loosening of sexual morals in London during the blitz, when the constant threat of imminent death induced in many people a devil-may-care attitude towards sex: “When the blackout came, London became a vast double bed.”

The love interest here is not the avuncular Leonard but a louche academic by the name of Jaap, who is wont to surround himself with female admirers. Jenny, ventriloquized by Gibbs’ third-person narrator, reflects on the porousness of the borders between the professional and the personal in their interpersonal dynamic: “In showing Jenny her own work in a new and kindly light, Jaap was entering into an exchange with her thoughts and ideas that was powerful enough to cross the mind-body membrane.” “There is,” she concludes, “an eros of learning that has nothing to do with power . . . let alone to do with sex”; it entails “The pleasure taken in the shared awareness of personal development, the shared joy of someone seeing their chosen self emerge.”

Gibbs’ narration foregrounds the small, verbal and non-verbal cues through which flirtation is mediated in the social sphere. Observing the movements of people at a drinks event, Jenny observes that they are “behaving like individual semantic units, mimicking the action of language itself, that acquires meaning only in exchange.” Appropriately for a novel so profoundly concerned with language, The Large Door features several vignettes on the subject of online communication, as Jenny ponders “the way social media concertinaed together action and reflection, text and interpretation, collapsing idea and reality, emotion and response into one virtual space.” By relaying the content of emoji-string message with purposeful blandness, Gibbs archly exposes the limitations of traditional language when confronted with the new digital demotic:  “A woman student in a mortar board, the dancing couple again, and then a purple evil-looking smiley face with horns”; “a smiley with lolling tongue, a banana, a peach, fireworks.”

The disorientation experienced by the cohort of people who are now in their late 30s and early 40s is particularly acute because theirs (ahem: ours) is the only generation in human history to have inhabited both the analog and the digital eras in early-to-mid adulthood. To be stuck in an early-forties rut in 2019 is to endure a twofold struggle: on top of whatever else is going on in your life, you have also to rewire yourself to suit the mores of a social world reshaped by technology. Here is Jenny trying to make sense of things in a scribbled shorthand:

the microscopic acts of social grace: flirtation, resentment, jealous, but crucially it allows you to reflect on these acts as you experience them. Fleeting emotional states freeze-framed, magnified, rotated in three dimensions like a virtual model on-screen, commented on, broadcast. Interior life as a shared doc. Combination of immediacy and critical distance means you live life like a teenager again.

There is a tongue-in-cheek ambiguousness about the humor that pervades this book, a flamboyant esprit that borders on camp. Take, for example, this description of Jenny’s ex-girlfriend, for whom she retains a strong residual affection: “When she wanted to, Frankie could sound as deeply compelling, as deeply true, as a Jesus from a Bach Passion. She was operatic in her tendency.” The narrator who would describe a character as operatic in their tendency is nothing if not operatic in their tendency. At one point, Jenny is horrified at the thought that Jaap might be sleeping with one of his students, Mysha, not because she is his student but because she isn’t very bright: “To sleep with Mysha would be a desecration of the unspoken, unformulated contract not between teacher and pupil, but between knowledge and the world.”

Reading The Large Door elicited in this reader a pang of nostalgia for a certain type of 20th-century English novel — the sort that saunters along on its merrily ironical way, sweeping you up in the comforting nonchalance of its spry wit and clipped assuredness. It is worth unpacking this response, and the slippery assumptions about cultural currency that underly it. We learn, from cultural primers, to think of the arts in terms of successive waves of change, with each new sensibility consigning its predecessor to the margins. This may hold true, to some extent, in the worlds of pop music and the visual arts. But the literary landscape operates rather differently: here conservatism invariably trumps iconoclasm, and the pace of change is accordingly glacial. From the vantage point of 2019, it is more helpful to think of the various iterations of the modern novel not as successive, era-specific phases but as a number of long, disparate afterlives running concurrently.

The marketplace for literary fiction is accordingly heterogeneous, and the journalistic tick of seeking to anchor everything to topicality does a disservice to that complexity. The zeitgeist is a chimera; there are only good novels and bad ones. People brought up on the delights of Spark and Evelyn Waugh will not jettison their tastes overnight just because someone in the literary press has declared that the conventional novel has had its day, and the confessionally candid, essayistic mode of writing is where it’s at. Readers of literary fiction are a stubborn lot and they know what they like. Unless and until they are persuaded to recant en masse, there will always be a place for well-executed artifice and sharply-observed social comedy. The Large Door has both in abundance.