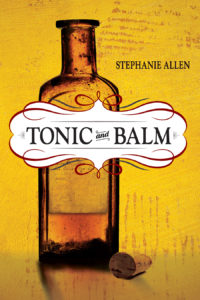 Stephanie Allen’s Tonic and Balm employs an unconventional but not unfamiliar formal structure. Explicitly labeled “A Novel” on the title page, the book nevertheless could also be taken as a series of discrete stories with an in-common setting (reinforced by the “Program” that acts as a table of contents) and overlapping characters. However, not all of the stories (or chapters) could really stand alone if read separately from the larger conceptual scheme of the book, since they contain little drama and depend heavily on the context provided by surrounding stories. This makes the book something more than the usual “story cycle” — in most of which the connection between stories is more implicit and indirect — but if a novel is defined as an extended narrative ideally featuring a protagonist, then certainly some readers could find Tonic and Balm not quite a novel, either.

It might be said that the book does have a protagonist — not one of the human characters but the setting, an early 20th century traveling roadshow called “Doc Bell’s Miracle and Mirth Medicine Show.” We are introduced to the performers in the show, on whom the novel focuses a chapter at a time (a few characters — including Doc Bell himself — are not given a separate section but appear at various times throughout the book). It turns out that Doc Bell’s is on its last legs, and during the season chronicled (the summer/fall of 1919), many of those attached to the Medicine Show leave it. One character, a young man to whom we are introduced first, is left behind when the show moves on, and another simply goes missing (a mystery left unresolved). We are not made witnesses to a great deal of the entertainment provided by the Medicine Show; we see Doc Bell hawking his patent medicine only once or twice, and only occasionally do the other characters describe their “professional” acts. Instead, we are presented with the testimonies and perspectives of the various characters about the nomadic lives they lead and their relationships with each other.

In its emphasis on place and its reliance on the character sketch as the primary narrative strategy, Tonic and Balm is strongly reminiscent of Sherwood Anderson’s Winesburg, Ohio, although in some ways it is a kind of inversion of Winesburg: where Winesburg is depicted as a static, soul-stifling sort of place, very much rooted to the social order underlying it, Doc Bell’s Miracles and Mirth Medicine Show is of course an itinerant home for itinerant people, who manage to forge a functional community of sorts rather than involuntarily subordinate themselves to the standards of a community that does not value their contribution. Moreover, both books share a preoccupation with the “grotesque” as a character trait, but where Anderson in effect laments the way the small town of Winesburg inflicts emotional trauma that makes many of its residents exhibit grotesque symptoms, both physical and psychological, Allen more or less embraces her characters, some of whom are literally grotesque in behavior or appearance, and portrays Doc Bell’s Medicine Show as kind of haven that allows them, not without struggle and suffering, ultimately to be comfortable with themselves.

If Tonic and Balm does have a human protagonist, it might be Antoinette, billed in the Medicine Show as “Sheba, Queen of the Nile.” She is afflicted with hydrocephalus, and, unusual for the time, has survived into adulthood, “rescued” by Doc Bell when she is no longer allowed to stay in the children’s home where she has otherwise lived all of her life, and employed as a freakshow attraction. (Her tent is usually set up well away from the main attractions, as if to underscore her “exotic” status.) Antoinette (who is black) appears often in the book, but she does not narrate a chapter of her own, although one, the penultimate chapter, hews close to her perspective. The physical impairments resulting from her condition are not greatly emphasized, but it is apparent that her presence makes people uneasy. Because she knows this (and because the transfer to Doc Bell’s initially disconcerts her — she wishes to return to the children’s hospital, the only home she has ever known), she maintains a distance, physical and emotional, from the other performers. Gradually, however, some of the other members of the troupe overcome their revulsion and treat her more kindly, and Antoinette accepts more human contact. At the end of the novel, she leaves Doc Bell’s with “Tildy,” the sword-swallower, to begin a dress-making business, and even though Antoinette finally succumbs to the progressive debilities of her condition, her sojourn with Doc Bell’s Miracles and Mirth Medicine Show clearly has helped her gain a degree of independence and a fuller participation in the world.

Many of the other characters in Tonic and Balm are also able to find in Doc Bell’s Medicine Show a secluded space of sorts — aside from their obligatory encounters with the “rubes” in the small towns where they encamp and perform — in which their essential status as outcasts is made less burdensome, shared among the whole cohort of people who remain invisible outside its route of rural villages and scattered farms. They are made to feel less marginal in the attention they receive from the rubes (a term that seems mostly to apply to their willingness to buy Doc Bell’s obviously fraudulent medicine) and through their collective efforts to keep the Medicine Show going. Among the more determined to help ensure its survival are Ma and Pa Fleet, a song-and-dance team who have been with Doc Bell long enough that when the manager and master of ceremonies leaves, Pa Fleet begins to assume his duties. Pa discharges these duties somewhat more benignly than the departed manager, Felix Conger, who ultimately abandons the troupe after a pang of conscience about Doc Bell’s exploitation of vulnerable audiences.

Doc Bell’s Medicine Show certainly could not be called an altogether benevolent Arcadia. Doc Bell himself is a pretty unsavory figure, but it would seem that the human interactions his medicine show allows helps its inhabitants feel a little less like misfits, in some cases motivating them to rediscover a modicum of decency and compassion, as is the case with Dr. Sauer, an alcoholic physician Doc Bell has hired to endorse his medicinal concoctions and see to the needs of his employees, when required. Dr. Sauer also vanishes during the show’s touring season — in the meantime we have seen him tend to Antoinette, whose deteriorating state begins to revive his own concern for practicing real medicine — but he appears again in the final chapters having resumed his career as a doctor and intent on caring for Antoinette. But she prefers to go with Tildy, rather than to a hospital Dr. Sauer has secured for her. If these characters can truly begin to flourish once they have actually left Doc Bell’s Miracles and Mirth Medicine Show, nonetheless their experience there clearly motivated beneficial change, so that these three characters, at least, provide the novel with a happy ending of a kind, even if we know that Doc Bell’s Medicine show itself will not continue.

This nudges the novel toward sentimentality, a quality finally not shared with Winesburg, Ohio. If Tonic and Balm, like Anderson’s story cycle, succeeds both in creating memorable characters and in fashioning a formal whole that is more substantial than the aggregation of its parts, it is less harsh in its vision of human possibility under pressure from social convention, suggesting some degree of compassion and solidarity might win out in response to such pressure. On the other hand, Allen, unlike Anderson, is not depicting historically present circumstances (when providing social critique might seem more urgent), but attempting to recreate such circumstances in a retrospective act of imagination. Moreover, that the novel does not settle for merely recreating period details in an attempt at historical fidelity (an effort with which too many historical novels content themselves) is entirely to its credit. But the attempt to extract from history an elegiac redemption story may not entirely avoid superimposing a present idealization on the past.