Millennials and the Moments that Made Us – Shaun Scott 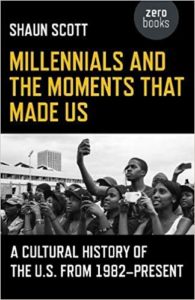 The “Millennial,” as Shaun Scott emphasizes in his book Millennials and the Moments that Made Us, is a late 20th century neoliberal construct, a bracket born of the market. The term itself, referring to anyone born between 1982 and 2004, was coined by Neill Howe and William Strauss, the founders of LifeCourse Associates — a consulting firm that makes generational delineations to help corporations appeal to presumed predilections. But in his book, Scott speaks back from behind the label, fishing in the sludgy river of the cultural and political history of the American Millennial and yanking out anything from the tech boom to Jay-Z to the news coverage of 9/11 to cupcake crazes in order to piece together a fragmentary origin story that also seeks to paint a more progressive portrait. At times thunderously incisive, at others quite tactically puzzling, he elaborates on the abundance of disparate “moments” he’s collected, in brief and somewhat disjointed passages, as a means of “captur[ing] something like a generational condition.”

Beyond that, Scott’s book finds its purpose as a historical rebuttal to the old stereotype of the Millennial as an entitled apathetic brat. He asserts how the Millennial response to our (I’m one of them!) historical condition has made for a larger embrace of socialist-leaning politics and social justice discourse — a rejection, for some, of the very sociopolitical conditions into which we were born and raised. (And incidentally in which our generational bracket was coined).  This is, after all, a generation whose activists (particularly Black Lives Matter) have viralized the foundations of activism from earlier generations, and sought innovative ways of undoing horrific yet dominant narratives that for so long seemed part of an inevitable American social order. Scott uses this side of millennial existence to undermine disparaging remarks from boomers—and underscore boomers’ own responsibility for . . . look around you.

Scott, who is black, also uses the book as an occasion to decenter and problematize the mainstream cultural idea of the American Millennial as any middle- or upper-class white twenty-something with a liberal arts degree trying to make it as, say, a voice of a generation. That avatar for the Millennial has both helped people discredit an entire generation and served as an insulting erasure of the most racially and ethnically diverse-ever generation of Americans. Rather than entitled, it is a generation — as Scott’s book addresses, with occasional statistics to back up some vast generalizations— whose parents themselves were absent as they struggled to keep up with the growing professional demands of unchecked neoliberalism. It is a generation that was plunged into the professional sphere at precisely the worst economic moment since the Great Depression. And it is a generation that grew up during the dawn of the fucking Internet and its accelerated changes to communication and the spreading of social consciousness.

Scott reads the history of the previous four decades, chronologically-ish, through a familiar lens that treats the early 80s and Reaganism as the fundamental pivot away from leftism towards “an era of rampant privatization and antisocial democracy” from which the country never returned, and to which Millennials have responded with a socialist streak exemplified by Occupy and the overwhelming support of Bernie Sanders (and now, perhaps post-this-book, the DSA, Alexandria Ocasio-Cortez, et al).

Scott writes, as culture seeps into politics and vice versa, about Reagan’s withdrawal of safety nets, his ramping up of the war on drugs, and the ensuing popularity of Cops and ubiquity of Nancy Reagan’s “Just Say No”; Clinton’s ironic emphasis on “family values” during the culture wars as he allocated $10 billion to the construction of prisons, which led to the mass incarceration of predominantly black men (gutting the black American family), and did away with welfare; media narratives of 9/11, Bush’s jingoism, his lethally delayed response to Katrina, and Kanye’s famous (and now, alternate universe-ish) response to that response — “George Bush. Doesn’t Care About. Black People.”; Obama’s “mixed legacy” and “obeisance to neoliberalism”; a disenchanted Millennial population’s tepidness toward Hillary, and ensuing low Millennial voter turnout; and the cultural history and election of “chameleon of late capitalism” Trump.

But despite the looming presence of Presidential figures over the book, creating a trace of continued narrative, it gives more focus to pop cultural “moments” Scott has decided have some bearing on how neoliberalism was shaped and/or digested and/or resisted. Scott offers the same room to Presidents as he does to the likes of Drake (“speaking to a digitally mediated sensibility of doubt and male entitlement”), Taylor Swift (with the book’s most hilariously acerbic line: “After being radicalized by a friendship with none other than Lena Dunham, Swift came out as an avowed feminist in 2014”), The Land Before Time (with one of the book’s oddest lines: “the traditionalism of The Land Before Time could not change the fact that women were the change agents of neoliberal society”), Daria, Ali Wong, Home Alone, Free Willy, The Misadventures of Awkward Black Girl, The Simpsons, “Billie Jean,” “Blurred Lines,” America Ferrera, Larry Clark’s Kids, The Ren & Stimpy Show.

Scott says, in his introduction, that he wrote the book using “a historicist lens that makes the present feel like the past, and that makes the familiar seem strange.” But this quality of historicist distance has its downsides. When 1980 and 2016 are handled with a similar tone, the former is substantiated by what we know would follow it, while definitions of and declarations about the present and more recent past inevitably are less supported by a traceable trajectory. Parts of the latter sections sound like a composite of potently written, yet half-formed think pieces. There are moments when the book can sound nearly conspiratorial in its overemphasis on the political weight of cultural products whose weight we may not yet know, or which is not fully explained. Take this passage on Rihanna’s “Needed Me”:

In her 2016 single “Needed Me,” Rihanna sang, “know you hate to confess, but baby you needed me” to an unnamed lover who takes her for granted. Indeed, millennials and women were two political stopgaps who were supposed to stop Trump from reaching the White House. But pop culture provided clues that Hillary Clinton was not an appealing candidate to these demographics.

You have to tie yourself into some pretty intense knots — including quoting one of the vaguest lines of a song — to flatten “Needed Me” into a narrative reflective of Hillary’s need for female and millennial votes.

And as wide as the net Scott casts is, the book is also short. By seemingly opting to replicate the very millennial experience of consuming words as a form of pastiche, the format sometimes enables Scott to draw links between vast, dangerous social waves and hyper-specific pop cultural tidbits without providing more than a few sentences of commentary on their place in all of this. Passages, like a long section on LeBron James or a moment-by-moment recap of news coverage of 9/11 as it happened — to which Scott devotes more critical room and fully traces a symbolic metamorphosis across time—are inspired. But largely, the book that was published exists in the middle: half-patchwork of moments, half-fragmentary-essay.

To avoid it feeling too ungrounded, the “moments” are each gathered into themed chapters that suggest the cultural construction of something larger, like “American Mom,” “American Dad,” “Millennial Man” and “Millennial Woman”; these are compelling categories, but even within them the “moments” can seem arbitrarily selected.

Should the editorializing have been spared, leaving more of a consistently abstract, descriptive, erm, mood board, of sorts, of neoliberalism — letting the moments, laid out, exist for themselves? Or should there have been fewer “moments” and more consistently substantiated commentary?

Scott himself wrote in a well-argued piece in Quartz, on the political limits of “woke pop cultural criticism,”  “Passive spectatorship — and not politics — is a preferred mode of civic engagement in our historical moment. When the arena where we allow ourselves to imagine a culture better than what we inherited is bound up in consuming, rather than acting, there’s only so far our intelligent insights can take us.” As a former professional “culture blogger” who for a time engaged in this very formation, I’m comfortable saying if there’s one apt critique to aim at Millennials (at least in the way we existed before Trumpism resulted in a greater abundance of direct action), it is of our common, but inside-out, approach of quickly seeking to condemn what’s wrong with pop cultural narratives before actively protesting the injustices of which they are a reflection. Scott’s pop cultural criticism is analytic, funny and sharp, and largely doesn’t fall into this trap — but the centrality afforded to “moments” of pop culture in what seems to be an attempt to elicit the political can make these observations, in their pointed brevity, sound too definitive. As presented in the format of “moments,” everything from the culturally minute, to the culturally mass-consumed, to the presidential, seems to possess the same almighty powers over history.

As the old adage goes, it’s hard to see the Millennial through the trees. But perhaps if the Millennial is not seen with total clarity by the end of the book, a generalized sense of our condition is certainly felt within the deliberate tangle of this selectively vast history. Scott knowingly ends his book with a listicle. If Scott’s book leaves you feeling like you just consumed a lot of randomized pop culture from the past four decades, and thereby a dizzying amount of politicized symbols and intriguing micro-theses, he seems to have largely succeeded in composing a Millennial-made score of the feeling of being a Millennial. He’s done so using the culturally analytic, fragmentary thought processes of our condition as his medium.

Moze Halperin is an almost-Brooklyn almost-playwright and almost-author. He likes ham (from time to time).