The Roar of Morning – Tip Marugg 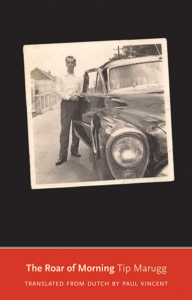 There are good reasons to let one’s thoughts drift towards the apocalypse, whether you read about the reemergence of millenarian religious sects or learn about another new, discernable effect of climate change. In the biblical sense the apocalypse signals an end to historical time, the time of man, and the destruction of his world. However, as the Greek apokálypsis suggests, with its literal meaning of “uncovering” or “unveiling,” this end point brings with it the revelation of some heretofore unknown or unknowable truth. In the fusion of Greek and Christian thought this newfound knowledge has a redemptive aspect, an end to the old order and the initiation of a new, more perfect regime.

There are apocalyptic thoughts born of anxiety, which I would suggest best characterize our contemporary moment, and those that are born out of insight, which as Martin Munro reminds us in his recent Tropical Apocalypse, have been part of the Caribbean mentality for some time now. Whether it be the recurrent impact of hurricanes, the devastation wrought by earthquakes (such as the 2010 earthquake in Haiti, almost inconceivable in its destruction of the basic infrastructure of everyday life), or the effects of colonialism and slavery that ripple through the present, apocalyptic narratives have constituted a special sub-genre in Caribbean literature and oral traditions. The Caribbean apocalyptic narrative, Munro writes, “is generated as it were from the inside, as a means of understanding (and surviving) the particular movements of history that have created the disasters of the present.”

Tip Marugg’s The Roar of Morning, recently published in translation by Yale University Press’ Margellos World Republic of Letters series, is a strange entrant into this field. Marugg’s apocalypse was bound to be a little different though. As Paul Vincent tells us in his helpful afterword, Marugg was born in 1923 to a line of Swiss Protestants who had been in the Dutch Antilles since 1804. After a stint in the military he worked in the public relations department of Shell, retiring in 1970 and living out the rest of his life in relative solitude until his death in 2006. He wrote works of poetry and three novels in Dutch, as well as scattered works in his native Papiamento (including a dictionary of erotic terms). Marugg is white, writing not in Spanish, French, or English, but the less common colonial tongue of Dutch, and forged perhaps less in the revolutionary spirit of neighboring islands but in the relative comforts of a white collar career, Marugg is not a typical Caribbean voice.

The nameless narrator of The Roar of Morning, white, solitary, and retired like Marugg, dispenses with these prejudices that may place him in a position exterior to a Caribbean sensibility early on in the novel. “It is not the Jew but Caribbean Man who is the most tragic figure on earth,” he relates in his pre-dawn, drunken meditation. “His destination is not Auschwitz but Disney World. He lives in hiding, even though the colonial occupation ended long ago. He suffers from night blindness and cures himself by spending the whole day in the sun. His life, a feast of laughing and dancing, is actually a lament, intoned to the sound of calypso, reggae or merengue: his mistrust is fed by skepticism about the likelihood of happy endings . . . The white man isn’t white and the black man isn’t black; both are aliens in this land where their umbilical cords are buried.” Marugg’s narrator, mellowed by a mixture of lager and whiskey, takes us through these complicated points of distance and identification over the course of a single night. He has reached a state of stoicism, inner peace, whatever you’d like to call it, and is able to draw on a reserve of judgment or emotion that gives voice to the world-weariness and occasional will-to-destruction of Caribbean Man.

The plotting of The Roar of Morning is very simple. “I try to recall the history of everything that guides and influences me; whatever it is that persuades me to sit on my terrace at two in the morning and drink my life away,” we are told. Ultimately this does not add up to much, or at least nothing that would help us diagnose or pathologize the malaise of the narrator. Sure there are failed relationships, dizzy spells that overtake the narrator during his early witnessing of religious communion and sexuality, and tragedies in those around him that would make one guarded against investing too much in the world. But the individual and collective undoing that hangs over the narrative (there is a revolver that sits by the narrator’s bedside that, in good Chekhovian spirit, will be used by the end of the book) gets built through observation, of his people, their land, and not seeds in the narrator’s past.

It is this accumulation of ethnographic and natural images that makes The Roar of Morning such an interesting work of apocalyptic fiction. Marugg’s Curacao and neighboring Venezuela are painted with great care and are full of suggestiveness, of a richly patterned social world and haunting landscape. There is a beautiful tension between activity and repose that builds throughout the novel. An early chapter begins with the line “Birds die in the blue of morning.” The narrator goes on to describe a trip he often takes to the coastal mountains to see birds dive towards a sheer cliff face and then bank sharply upwards at the last second. Each time this occurs three or four continue on towards the cliff “and are dashed to pieces against it.” This kind of image, like the others, is not tinged with bitterness or morbidity, but an equanimity that characterizes the whole book.

The narrator describes a mysterious, disfiguring and often-deadly fever attached to a most likely apocryphal saint that comes with the “moon wind.” He speaks of youthful years spent with his uncle in Venezuela, where he met a “thin man with dead eyes” and felt the immense power of communion outside of language. While in the countryside, riding out a workers’ strike in the city, he witnesses an impromptu and to his religious uncle ridiculous game of pub trivia that blends folk medicine, biblical knowledge, and biology. He hears of a local custom, “a very special way of settling disputes between neighbors,” where women mobilize youths to spread slander. Once the clash becomes sufficiently heated, sides are drawn on opposite banks of the river and mud balls are hurled back and forth at the disputants. “Sometimes, when it got late, stones and slivers of glass were put in the mud balls, and if one of these nonstandard models hit the mark, the supporters of the injured person would rush across the bridge and there would be a general free-for-all. At this point the men would get involved and the part would end in a knife fight.”

He also describes how the “low hills opposite me descend in serried ranks towards the coast,” or how he loves “the hushed quality of the island when nature has fallen asleep, a few hours after midnight when the immobility of darkness prevails. The leaves hang motionless from the trees like tired eyelids.” We begin to accept these descriptions without that nagging interest in characterization. “As usual,” the narrator admits just before the apocalyptic conclusion of the novel, “every attempt to understand myself fails, every yearning for God is punished.” In this sense The Roar of Morning is quite anti-climactic — in a digressive and descriptive mode it falls well short of self-knowledge or it fails to intimate truths, those buried umbilical cords, that an apocalyptic event is waiting to disinter.

Nonetheless, the dazzling, quite climactic final chapter seems completely appropriate. As the morning approaches, the narrator juxtaposes his final attempts at understanding with an encompassing, minute-by-minute vision of South America and the Caribbean’s end — “At 2:48 am God embraces the continent with his gigantic arms; with one hand on the Atlantic east coast and the other on the Pacific west coast, he squeezes with all the fearsome geological strength at his command. The continent creaks from top to bottom.” By 3:00 it is all finished. “The vast land is empty and lifeless; only in the deepest recesses of a gigantic ice floe that drips up from the Antarctic is there a faintly throbbing, slimy mass, from which one day an amorphous, translucent creature will be born.”

Martin Munro relates a Haitian proverb at the beginning of Tropical Apocalypse: “Nou mouri déjà, nous pas pé santi — we are already dead, we don’t fear the odor of death.” Marugg’s narrator certainly lacks fear, but also lacks the expectation that revelation will occur at his death. In most Caribbean apocalypse narratives the undoing of the world works allegorically, to say through art what is unable to be said through politics — that endemic poverty, corruption, violence, and exploitation can only end in some epic negation, of slavery and colonialism’s origins or of an interminable string of catastrophes. The spread of Protestantism in the region can in large part be attributed to its attempts to imbue this eschatology with a sense of redemption, and in this sense Marugg is clearly working in defiance of his own background. Like “Caribbean Man” his apocalypse is negative, but unlike others in the genre his destruction of the world is not colored with bitterness or despair; it simply remains on the narrator’s horizon, another detail of his world to be described and in no larger narrative context, with no bridge between the personal and historical. An anti-climactic novel of the apocalypse is a strange entrant into Caribbean Apocalyptic literature indeed.

Michael Schapira is the Interviews Editor of Full Stop.