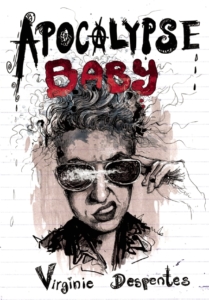 Apocalypse Baby by Virginie Despentes, translated from the French by Sian Reynolds, flirts with the mystery genre — it involves detectives and a missing person case — but it’s more political thriller than straightforward mystery. The detective work that takes place in the novel is a joke: Lucie, the novel’s first person narrator, doesn’t care enough about her job to focus on it for long, and the Hyena, Lucie’s hired help and the real brains and brawn behind their operation, works mainly by intuition and lucky guesses. It’s almost as though Despentes believes there is little point to true detective work anymore. Instead, she describes a world so saturated by invasive technologies that those in power can know just about anything they want. The only way to escape is to renounce cell phone and computer use entirely, which Valentine, the missing girl at the novel’s center, decides she must do. Solving a missing person case is more a matter of waiting for that person to connect back to the grid, even for just a moment.

Despentes takes a while to get the machinery of her plot moving, and instead focuses the earlier parts of the book on exploring her characters. Sections narrated by Lucie in the first person alternate with third person sections introducing and giving the backstories of the other characters. Despentes takes her time with these stories. From Lucie’s opening narration, we move into a chapter focused on Valentine’s father, the sort-of-famous author François Galton, and then to chapters on Claire, her stepmother; Yacine, her cousin; and other characters who pop up as the story progresses. In the novel’s first half, Despentes uses a very close third person point of view to capture various voices. She is particularly good with François and his writerly insecurities:

He remembers, with bitterness today, a dinner party at which an eloquent publisher had kept them in stitches talking about the current best-sellers, forecasting that the way things were going, one day people would want to read novels by young girls going into detail about their hemorrhoids. How they had laughed. No, he hadn’t seen it coming. Authors who wrote about their eating disorders, or getting raped by their fathers, writers who were illiterate sluts, writers who boasted of screwing teenage girls in Thailand, or of being high on coke. He hadn’t seen it coming at all.

This is clearly François talking, revealing his fury at the world, his casual misogyny, and his desperate fear of failure. Equally perceptive and amusing is Despentes’s depiction of François’s most recent wife Claire, who falls in love with François’s novels rather than with the man himself. Despentes satirizes Claire’s foolishness and the fatuousness of François at the same time:

François always had to twist the scene so that it came down to the level of his narrator’s character, then he could dominate it. But even that she ended up liking, the childish side, the suggestion of fragility, an aspect of him that she could protect. His novels whispered, to a corner of her heart, that she had met a man she could love.

Again, we see Despentes’s command of voice when the Hyena visits Valentine’s relatives on her mother’s side, a Muslim family of Algerian origin. She meets Yacine, whose mockery of the idea of cross-cultural understanding shows both his bitterness and his insight:

Well, anyway, do what she likes, there’s no way we can get on, her sort of people and our sort of people. Only the kind of French who live in cloud cuckoo land could imagine it’s still possible to understand each other. The ones who never see any rats. In the places they live, the way they live. No meeting possible. No forgiveness. No argument. The people who don’t like them are absolutely right.

The tone here and elsewhere is perfectly calibrated to offer both an interior and an exterior perspective, both the characters’ self-justifications and a resounding judgment on their failings.

The control over voice doesn’t last, however, and the last third of the novel loses some of its sharpness. The changes in point of view start to feel jarring as the characters’ voices become less distinct, and the back stories that offered satirical pleasures earlier begin to stretch on too long. The novel’s scope becomes wider and at the same time more muddled. We learn that Valentine has fallen in with a group of young people with revolutionary ambitions. Lucie and the Hyena assume Valentine has tried to find her long-lost mother, and so travel to Barcelona where they continue their investigation but treat it more as a vacation than a work trip. They discover a nun who has met Valentine, and the novel veers off into the nun’s history. It’s not surprising when Opus Dei makes an appearance. Ultimately, character development takes a backseat to thematic concerns, as we learn about the sources of Valentine’s unhappiness and her budding political beliefs. One pressing problem is her growing fear of the ubiquity of technology. Her revolutionary friends debate the future of the Internet:

“These are the last fun years on the Internet! It’s still possible to subvert it, and get into these, kind of, utopian spaces. We’d be crazy to abandon this whole area completely, on the contrary, we should be trying to defend it and take it over.”

“Valentine’s not abandoning anything, she just doesn’t want people to know every minute where she is. That’s quite different.”

Valentine’s quest for freedom from surveillance is all a part of her desire to discover who she is. In this sense, she is typical of any struggling adolescent. But her particular circumstances take her to places most teenagers never go.

Apocalypse Baby is a very ambitious novel, which is its strength and the source of its weakness. It is interested in family drama, adolescent rebellion, sexual exploration, the pretensions of novelists, the trials of detective work, the dangers of technology, and the challenges of being Muslim in France, among other themes. It looks deep into the history of many different characters. It brings all this together in a dramatic and satisfying ending. The later sections of the novel start to sag under the weight of this complex material, though, and other questions linger. Lucie is an odd character, a half-hearted, hapless detective who knows she’s not very good at what she does and doesn’t care much. She is an odd choice for Despentes’s sole first-person narrator amongst the many third-person sections. Her ineptitude is revealed from the inside and from the outside, from her own thoughts and the impressions she makes on others, but Despentes doesn’t make as much as she could from these juxtapositions. It’s not entirely clear if we are supposed to sympathize with her or agree with the other characters about her incompetence, or both. On the other hand, the Hyena is a fabulous character. She is violent, brutal, and known for getting the job done. She brings a chill into the room when she enters. She says things like this to Lucie:

“There is no dignity, there is no gentleness. All the people who were good and honorable, all the nice guys, have been wiped out. And not yesterday either. All that’s left is people like me, scum of the earth. People like you, what can I say, you’re just not going to make it.”

One of the many pleasures the book offers is that of deciding whether the Hyena is correct about Lucie’s fate. It’s a tribute to the complexity of the novel that we spend a lot of time enjoying the company of a woman who self-identifies as the scum of the earth. Despentes’s sharp social commentary and her ear for her characters’ voices make this far-from-perfect novel still one that is satisfying to ponder.