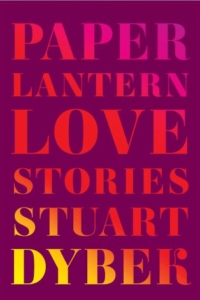 Stuart Dybek’s Paper Lantern: Love Stories should be sold with a warning: do not read if you’re recovering from recent heartbreak. Or, more properly, if you’ve ever experienced heartbreak. Set mainly in the Midwest, and in particular Dybek’s beloved Chicago, he writes head on about the city’s poor and working class with the same ease as he examines the inner lives of over-educated academics. Each of the nine stories in the collection is about love the way that Romeo and Juliet is about love — sure, men and women fall for each other, but after the sparks and sex, things fall apart. In Dybek’s world, everyone more or less survives, at least in the metaphysical sense, though it speaks to the understated complexity of his stories whether surviving heartbreak is worth it.

The decline of love in Dybek’s collection can be swift, as in “Waiting,” which opens with a reflection on Hemingway’s “Hills Like White Elephants” and goes on to address waiting in other literary works from Melville to Joyce, before always returning to Hemingway’s elegiac stories. Dybek weaves “Waiting” with these meditations while flipping between Jack’s current relationship with Lise and his flawed, complicated relationship with Felice, a woman we meet in “Seiche,” one of the collection’s strongest pieces. In “Waiting,” we know Jack’s relationship with Lise isn’t sustainable — the Hemingway is a dead giveaway — and we watch as the two adults carefully dance around each other’s vulnerabilities and hopes while we simultaneously wait for the crash. In “Seiche,” however, Jack is a younger man and his love for Nisa, a Lebanese student, burns the page with the ache of yearning and the tragedy of a first love, here rendered poignant because Nisa, after boarding a plane to return to war-torn Beirut for her grandfather’s funeral, disappears, vanishing from Jack’s life and the second half of the story. Her conspicuous absence acknowledges a large truth, though, about how our greatest loves never quite relinquish their hold on our hearts.

If this sounds mushy, it isn’t Dybek’s fault. Thematic love is hard to elucidate in prose without resorting to the fuzzy-wuzzies of bombastic Hollywood romances. Dybek’s stylistic restraint serves him well to tell the stories of brokenhearted men and women, and his manner of interweaving non-narrative strands into the central story safely deliver him from sentimentality. This approach works well in “Tosca,” the collection’s first story and one that opens with a man facing a firing squad before traveling, by turns of sentences so deft it’s like Nijinsky pirouetting between the words, through a parallel detailing — not unlike the one in “Waiting” — of firing squads as a device to expand and collapse time in cataclysmic moments throughout literature and opera while simultaneously recalling the narrator’s second-hand witnessing of others’ love affairs. Dybek is a man infatuated with the world’s oldest stories — love, both gained and lost — but he’s also immensely empathetic to his characters and uses his familiar Midwest landscape to express love’s grit and giddiness. 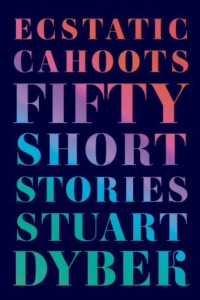 The simultaneously published Ecstatic Cahoots, a collection of fifty flash fiction pieces that takes its name from a line in Fitzgerald’s The Great Gatsby, is less successful than Paper Lantern. Where the stories in Paper Lantern hang together along a theme of love, the flash fiction in Ecstatic Cahoots — some pieces a few sentences long — seems randomized, and the inherently brief nature of the genre collides the stories into a heap. There are re-occurrences and connections here too, but unlike the parallels between certain stories in Paper Lantern, the associations in Ecstatic Cahoots are messy and read like haphazard discoveries rather than the arching epiphany for which Dybek aims in his longer shorter fiction. The occasional successes include the blazing “Córdoba,” which handles a repeated line from Lorca, a gun in a glove box, a blizzard, and a mysterious woman with the same nimble precision of Dybek’s best stories. It also happens to be one of the longest pieces in the flash collection.

“Paper Lantern” is arguably Dybek’s most well-known story, and for a reason; among those in both collections it’s the standout, the type of story that makes young writers aspire to do what many cannot: pivot an entire narrative around the ugly beauty of things. For all the stories about love and broken hearts that exist, Dybek does more than add his Chicagoan twist. He reminds us that we must return to whatever it is that anchors us, even if, like the priest in “Seiche” swimming day after day towards the horizon of Lake Michigan, we shoulder our emotional burden alone.