The Bend of the World – Jacob Bacharach 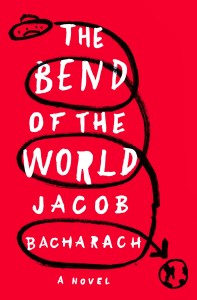 The setting of Jacob Bacharach’s world-switching first novel The Bend of the World is a Pittsburgh filled with UFOs, mysterious corporate takeovers, and conspiracies involving dimensional time-travel and the CIA. But beneath this hip camouflage, there is a book far stranger than the aliens and emptying office buildings suggest.

We have a narrator, Peter Morrison. Peter is twenty-nine, very funny, and in his mind, subversive in his lack of allegiances. He’s a libertarian non-voter, with an artist girlfriend and a corporate job at Global Solutions. He has also seen three silver disks floating in the sky — though this was after a night of alcohol, cocaine, and mushrooms. His best friend Johnny, a confirmed UFO believer, remarks that Peter became ‘more normal’ after seeing the UFOs. But more normal or not, evidence for the reality of what he witnessed begins to accumulate, and Peter is drawn into the simple logic of conspiracy theory.

Two others, Mark and Helen, an upscale married couple, witnessed the UFOs. Along with being an advocate for the savageries of modern capitalism, Mark has opinions on art and Adorno, and soon after the encounter, he takes a quasi-friendly interest in Peter’s career and life, since Mark is in control of the breakup of Global Solutions. Helen is an artist, or was an artist in the mold of a New York art-world star. She is, of course, beautiful and sad. As he begins, with Mark’s help, to rise through the remnants of Global Solutions, Peter becomes obsessed with Helen. There is no surprise when he begins having an affair with her.

Based on the structure of the book, the reader can almost predict the convergence of various plot points — UFO conspiracy freaks and corporate takeover specialists and Peter’s acerbic self and two people who represent everything superficial that Peter is not — towards an implied conclusion that says, loosely, that the fate of the comfortable individual is to crave illusions, find enlightenment-seeking ideals child-like, and be defeated perpetually by an adult world that requires one to balance out illusion and truth. In short: the smug apology of every person who claims that the world is all that the neoliberal/late-capitalist world claims it to be. In literary fiction of this type — male narrator, plot-juggling narrative, stylized voice — craving and desire are the essential fuel. They either drive a character to extreme and comic alienation, the alienation of the overridden mind that can’t compete, or they are so lacking or flattened that their negation marks the text completely.

But Peter’s quest is a different one. He is denizen, victim, and fool of his world, but he does not crave the world’s attention, nor does he suffer when the attention of the world is not returned or when his place in the hierarchy is not where it could be. It is this difference that pushes the novel back to the wandering human machines of Voltaire and Defoe. Peter is, in his muddled way, an engine apart from the angst and eccentricity around him. But Candide and Crusoe both passed through worlds firmly established in eighteenth-century reality. The ideal world that Peter encounters is no longer that of the New World explorers or the Age of Reason’s philosophers. It is one that lives inside the head of every internet surfer and artist and corporate apparatchik. .

At the beginning of the book, he says: “The office only crushes your soul if you’re dumb enough to bring it to work.” And then he presents a good case for why life, as long as one does not imagine the act of being crushed, isn’t as crushing as one might think. He has, he notes, a salary, a bathroom nobody else knows about, and free time for which he is paid to surf the internet. It’s a charming anti-angst statement about enjoying the nice things, such as private bathrooms and being paid to surf the web. But it is also his oblique confession that he is unaware of any location to place his soul.

Peter says (about a book on the overall conspiracy):

You get the sense, reading these books, that there was just an insufficient amount of truth in the world, that the neat parsing of probability and possibility down to the merely actual was just such a drag that the author had to admit every strand of improbable and impossible narrative to the tale as a hedge against the thinness and paucity of the real reality.

This is the paradox of all conspiracies: their reality is not capable of supporting the truth. Peter’s problem is that these conspiracies are everywhere: around him is no place to live. Normally, the discovery of this problem would be the terminal point in a novel. Fixing such a problem pales in front of the diagnosis. But Bacharach does not walk away from Peter.

The plot’s culmination takes place in the woods outside Pittsburgh. Here, a shotgun-wielding author transformed (through the help of esoteric narcotics) into Bigfoot chases Peter and his friend through the forest. An alien ship or a helicopter hovers above them. The police arrive. The result is jail for Peter, and Helen’s body found floating in the Allegheny River.

“I suppose I’d always thought of Helen in the past tense anyway,” Peter explains, after he learns of her death. But he may be talking about himself: though he is narrating, part of him seems to have disappeared as well. He seems, however, not to miss this part, or to even acknowledge the difference. His soul seems to be in a place.

When Peter buys a house or goes to a gym, the tone is elegiac, as if the events have been overtaken by grace. In Helen’s funeral, ceremony and speeches are overwhelmed by same tone, a grace realer than convention allows. At the end of the conspiracies, Peter realizes, is the world that he has actually made. It is this world he is a part of, and in which he must work. There is absolutely no sense of religion or divine interruption in this change. Peter simply began to think differently.

But his beliefs remain unchanged. The sentimental conservative view is that the educated are taught everything but belief. So to believe, they must unlearn their education in order to participate fully in the world. The Bend of the World inverts that proposition: we are taught belief, it suggests. We are taught belief in art, institutions, personas, and higher planes of existence. But we are not given any philosophy or education through which belief can be grounded, and if necessary, forgotten or destroyed. The title suggests that of a real world beyond the many conspiratorial worlds. Their end, unlike the end of an actual life, will be no loss. And it may be, in our dreams of conspiracies that end up circling on their own logic, what we hope to achieve.

But the novel also holds out the possibility that grace may be simply a fugue-like combination begun by death and held in place by grief. After time has passed, the world moves on and grace is forgotten. It may already be forgotten, or not as bright, as Peter thinks at the end of the book. If so, what this means is beyond any to acknowledge, and more importantly, it lays beyond our responsibility to control. The idea that grace or enlightenment or comprehension can be ordered is an idea that creates another world. It is this that connects Peter’s fate to a moralism that proscribes nothing and predicts nothing. It is interesting to compare this to the moralism that has dominated American fiction for some time: the end of irony and the return of common sincerity. This has been, since Wallace’s E Unibus Pluram, non-standard gospel for modern literary fiction. And yet Bacharach’s moralism feels far more real and honest and most importantly, kind, than the desperate life-changing tone of Infinite Jest or Wallace’s later work. It’s hard, actually, not to think, in a mean-spirited way, that the generic target audience of Infinite Jest, ambitious twenty-something slackers, became exactly what that book seems to fear the most: forty-something bourgeois still happily tortured by the needs in their heads and fears for their future.

Though this is Bacharach’s first novel, he has had a long career on the internet. He was the pseudonymous IOZ behind the Who Is IOZ blog, and now blogs under his name at his personal website. His voice was and is that of a bemused anarchist with a sharp moralism and affection for weirdness, geek culture, and dense sentence structure, as if Sterne or Thomas Browne had spent their lives playing computer games and watching bad sci-fi movies. The Bend of the World sharpens that voice into a moral journey of philosophy, or anti-philosophy, in the guise of a coming-of-age story (if twenty-nine is the new thirty) that happens to operate under the sign of alien spaceships.

Thomas Schrope is a writer living in New York.