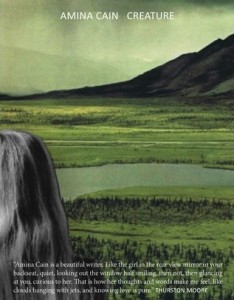 Amina Cain’s stories are quiet. Her characters — can I call them creatures? — live in a suspended, in-between space, hovering on the edge of self-realization. They are all women, but they give the impression that they are very young, unformed and unsure of themselves. Many of them are writers and artists, trying to create. In telling stories, in making art, they are grappling with their worlds and themselves.

In “A Threadless Way,” the first story in the collection Creature, the unnamed narrator has just moved to a new city:

Across the street from where I lived was the school of architecture, and the huge, dusty lot in front of the long building comforted me like the cornfield did. The building had once been a train station, and the friend whose room I was subletting had gone to this school. Even with all this comfort, though, I felt like a weird person. Sometimes in the loft I could barely hold my head up as I talked to people. I couldn’t look them in the eyes.

She begins by looking outward, at the building across the street, but her gaze turns back to herself. She is struggling to locate herself in a new place. More than that, she is trying to relate, but she cannot quite reach beyond herself. Later in the story, she meets up with a friend and wonders why they have drifted apart. “I was weaker than I had been when we were close, and he was stronger. This probably had something to do with it.”

The girls in Creature remind me of Ruth in Kate Zambreno’s Green Girl, the ingénue who does not know herself, the blank slate on which others project their fantasies and desires. An American working as a shop girl in London, Ruth tries to find epiphanies in dresses, makeup, and French New Wave films. She wanders through the damp city streets looking at her reflection in windows, trying to see a face in the void. Cain’s creatures are not city girls. In fact, they are often at home, reading and writing, trying to connect with friends and lovers, but like Ruth, they are trying to find their place in the world through self-narration.

When I first got the book, I thought it was called Creatures. About halfway in, I began to think of the characters, all but a few unnamed, as the same girl, each story a different facet of the same creature. The title evokes the animalistic, the primal realms of sexuality and creation. In the last story, “Delicately Feeling,” the narrator becomes entangled with a couple she meets at a theater:

“It’s never just the two of us anymore,” she says. “Whenever we’re together you’re here also.”

I feel it, that I am there in that house; but I am here in this house too.

It’s as if the couple has softened into one creature — what I am drawn to is singular. I move toward a relationship, not two. It’s not the woman I crave, or the man. But, still, it’s three bodies in a bed.

At this edge of language, love, and the body, our boundaries begin to dissolve. We lose the rationality we associate with being human. We inhabit our power to create and destroy.

“Who has not asked himself at some time or other: am I a monster or is this what it means to be a person?” Cain quotes Clarice Lispector in the story “Queen,” In Lispector’s The Hour of the Star, the aging writer Rodrigo S.M. struggles to create his character Macabea, who, unlike him, is a young girl from the slums of Rio. He sees himself in Macabea and in writing her story, he probes his unknowable self, a prospect that frightens and compels him. Likewise, Cain’s creatures are secrets even to themselves and are trying to determine the dimensions of their human selves. As I read these stories, I found myself looking inside for the makings of a creature.