Get out of your head

I recommend getting out of your head. How do you get out of your head? I recommend watching this animated gif as a kind of relaxing morning meditation . . . maybe start to feel the feeling of your stomach or something and then slowly let that feeling rise up through the rest of your body as though feeling itself were a series of colored traffic lights igniting in succession, one after another, up the small V-shaped bones of your spine and then dispersing out into the sky above your cranium.

If you insist on reading something as a means to get out of your head, I recommend Borges’ “The South,” which, in Spanish, is called “El Sur.” The story seems to be about a character named Johannes Dahlmann (John of the Valley) — whose name is likely a clever hat tip to Kierkegaard’s Johannes Climacus (John of the Ladder). Like most of the stories collected in Ficciones, this one is short enough and powerful enough that it would be a disservice to attempt any kind of summary here. If you really want to be transformed, maybe try reading Borges’ “The South” every day for the entire month of June. 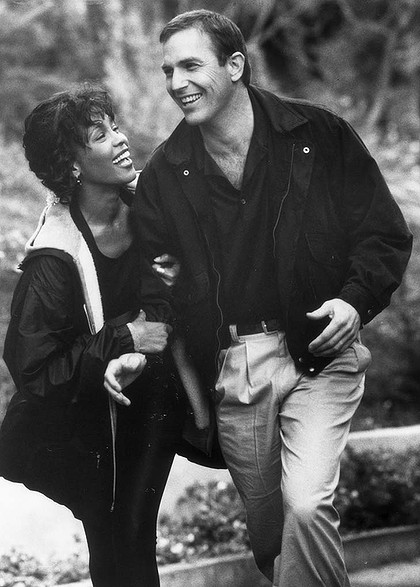 The Bodyguard, the 1992 film starring Kevin Costner and Whitney Houston, has always lived in my memory as my childhood friends’ mothers’ favorite movie. It promised a kind of womanly romance that I was a little anxious about getting too close to — a movie for mothers to watch without their six-year-old daughters. So it took me a couple of decades and the death of Whitney Houston and eventually a bad case of the flu to get around to watching it myself. But now that I have, I’m left confused. I never thought The Bodyguard would be a really good movie, but I was not expecting it to be quite so bad.

I am not the first person to note that there is not the faintest hint of a spark between Kevin Costner and Whitney Houston in this film. The leading coupling generates nothing that even begins to match the vast, crashing waves of emotion that the movie’s famous song, “I Will Always Love You,” promises. As a point of comparison, people love “My Heart Will Go On” by Celine Dion because it’s attached to “Titanic,” and listening to it puts them back into the world of the movie. Titanic is not out-shone by its signature ballad. But The Bodyguard is ultimately just a movie that’s an excuse for a song. When “I Will Always Love You” plays at the end it almost makes you feel like Costner’s Frank Farmer and Houston’s Rachel Marron might actually kind of love each other, but without it, nobody would be anywhere near convinced. Without “I Will Always Love You,” without Whitney’s mega-volume voice, we would have long ago forgotten about this weird concoction of crime drama love story.

And so I recommend The Bodyguard as one strange cultural artifact that survives as a twisted ode to a shape-shifting song and two singing ladies whose voices are propelled with such force by the great winds of love and tragedy that they can puff up any saggy, punctured balloon absolutely to bursting.

In a lot of ways The Source Family is a very conventional telling of the transition from the 1960s into the 1970s. Like The Black Power Mixtape, a movie that seemingly would have little in common with a documentary about one of the stranger experiments in utopian California living, The Source Family begins in a flurry of great exuberance, optimism, and public celebration. Organized around the figure of Father Yod (aka James Baker, aka YaHoWha) and his wildly successful Hollywood restaurant The Source (one of the first vegetarian health food restaurants in the country), The Source Family grew into a community of spiritual seekers who eventually moved into a large compound in the Hollywood Hills. There the family sets a course of carnal and spiritual experimentation (‘balling’ and idiosyncratic forms of meditation, respectively) that again showed great signs of initial promise. But here is where the two films converge, and where the time periods they cover become decisive. Just as the Black Power Mixtape concludes in a Harlem flooded with drugs and many of the movement’s leaders either in prison or a form of exile, the Source Family begins to grow wary of the loose marital arrangements, the spontaneous shifts in Father Yod’s philosophy, and the intense demands of their spiritual regime. The family moves to Kauai, is harried by the locals, falls prey to paranoia, and eventually unwinds after Father Yod dies in a hang-gliding accident.

Now, that being said, it is the particulars of The Source Family that make it a particularly compelling version of this story. To take one example, you actually see Father Yod’s hang-gliding accident and the near-death state that the family finds him in. Without spoiling it, you see what could be considered a miracle performed by Father Yod on a stillborn child. At one point in the early 70s the Source Family starts to record insanely psychedelic music (their records are still highly coveted by collectors), and lacking support from justifiably suspicious record labels they promoted their music by playing high schools around California. In one of the greatest scenes of rock ever captured, Father Yod, sage-like as ever behind a giant standing drum, intones to a group of Beverly Hills High School students, “I’m the father you all wanted, but never thought you had, but you do have.” And the steady stream of fantastical images goes on — sex magic, ecstatic visions, period costumes from pre-modern religious sects, run ins with celebrities and, of course, many beautiful berobed people surrounding Father Yod. As a historical document and as instructional manual for anyone interested in doing a sex cult right, The Source Family gets the full Full Stop recommendation.