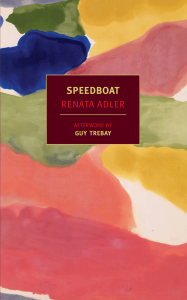 Speedboat is a hyper-first-person narrative, imbedded deeply in the perspective of narrator Jen Fain, who gathers the world as a rough-cut mosaic of fragmented perceptions. Strangely, it often doesn’t feel like a very personal story. Jen keeps a critical distance — we see what she sees but we hardly see her. Her emotional experience of the world is papered over in half-told stories as she hops from thought to thought to thought.

Jen gets the essential facts of her life out of the way early on. She sets her scene (she works at a newspaper, she grew up in the country) as if she’s in a hurry to talk about something else. Like a young woman trying to explain her reality to an older relative who couldn’t possibly understand, she mutters, “Things have changed very much, several times, since I grew up, and, like everyone in New York except the intellectuals, I have led several lives and I still lead some of them.”

Jen thinks, speaks, and observes in an anxious rush: “‘You can’t miss it’ always means you’re never going to find it. The shortest distance between two points may well be the wrong way on a one way street.” Everyone, everything is in a hurry, and there’s no settling, no stability, and no comfort. Whiskey, hotels, psychoanalysis, male partners that follow one after another with as little excitement as heartbreak, the forceful propeller of an ambition that can’t quite find its aim, women who “tip reasonably and drink a lot” — this is Jen Fain’s world.

Speedboat is Renata Adler’s first novel. After its initial publication in 1976, it eventually spent 20 years out of print, and has now been brought back by popular demand, released in a new edition last month by the New York Review of Books. Since then, internet conversation surrounding the novel has involved discussion of whether it feels dated in 2013. Katie Roiphe wonders in Slate if Speedboat hails

from a vanished time of early feminism, when the victimized or lost woman called out for brilliant narration? . . . Have ambition, and drive, and health and settledness and material success become so ascendant and romanticized that the lost woman is obscure or inscrutable or irrelevant? I don’t think so.

I don’t think so, either.

Jen Fain might be lost, but she and her cohort are not unambitious. They exist in the same precarious position that is, for a variety of reasons both cultural and economic, the reality for so many young people today. If anything, the concerns of Jen’s milieu are precisely the same ones that supposedly plague contemporary career-oriented, unmarried women so often written about in magazine cover stories. Can they “have it all”? Maybe Adler’s was the first generation to really try. Jen observes of herself and the women she knows:

But she continues: “From time to time, however, there is something, I don’t know, wistful, about how it has turned out . . . . the other ships that don’t come in.” Of course, no one can ever have it all.

But this particular melancholy is only a part of the furious whirlwind of observation that comprises Speedboat. Jen has an ear for eccentric language. There’s the little boy who mistakes the class recitation of “I’m Free” for “I’m Three” and, confused, disagrees, saying, “I’m Four.” Edith from Kiev calls herself a “Terapist.” And the old woman on the airplane says, “My crackers, inside. I am going to want.” Reading the Times obituary for King Faisal of Saudi Arabia, Jen observes, “As an example of his gift for poetry, there was the line, ‘See you. There be Arab.’ Something lost in translation there, perhaps. Everywhere.”

While Jen’s noting of bad English can read as a bit mean-spirited, there is a bigger point here about the challenge of communication. Reviewers have described Speedboat’s fragmented character as expressive of the dissolution and confusion of 1970s America — the America of Watergate, Kent State, and Vietnam. But perhaps something more intimate is at work here than just the inability to tell a whole story, or the death of the grand narrative. Jen Fain has difficulty reaching any level of intersubjectivity at all, even with the reader. For Jen, emotion comes out in tiny, pained spurts. When she writes, “I have been wrong about a lot of things. I still have his tie,” the feeling is just below the surface, just inaccessible.

Towards the end of Speedboat, Adler begins writing about a professor of poetics with a special interest in synonyms. He says:

You will see at once that every choice in language is determined on every plane, rhyme, meter, meaning . . . by a factor of synonymy. And one of contexture . . . . synonymy and contexture, are among the key structures and processes of the mind.

While Jen Fain is laughing at this professor and his synonymy — as she laughed at the grandmother with the crackers, at King Faisal’s poetry, at the little boy who can’t make a “th” sound — there is a resonance with the way that Speedboat is written. It is full of intertwining threads and axes of connection that arise not necessarily out of the expression of meaning, but rather from the rhythm of the feeling of not quite being able to fully communicate anything.

The meaning, then, lies in the cracks and dissonances between thoughts and emotions. And that, perhaps, is the special draw of this half-forgotten novel. In the vocabulary of the professor, the “contexture” of Speedboat, its weave and structure, is not quite like anything else around — not in 1976, and not in 2013.