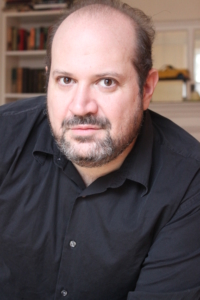 Sam Lipsyte is the author of the story collection Venus Drive (named one of the top twenty-five books of its year by the Voice Literary Supplement) and three novels: The Ask, The Subject Steve and Home Land, which was a New York Times Notable Book and received the first annual Believer Book Award. He his new collection of stories, The Fun Parts, was published on March 5.

If there have been deleterious health effects, it has more to do with my decision to sit than with my decision to write. A sedentary life is not the best for one’s health. I always wanted to stand and write, like Hemingway, but I couldn’t get the hang of it. I do pace a lot.

I’m not sure what negative effects it’s had on my personal life. When I wrote my first book I sequestered myself pretty thoroughly. Home from my day job, I’d make some coffee and write late into the night. I had a friend who’d come over to eat pizza and watch movies once a week, but that was the extent of my personal life. My life has gotten fuller since then. I have a wonderful family and great friends. I always have that urgency to write, which requires me to cut myself off from people who are dear to me at times, but that comes with any solitary work.

I’m not certain which tradition you are referring to, but if you mean a shopworn idea about starving poets in a garret, I think it’s foolish. I guess it’s also a question about the word “poverty.” Do you mean the crushing poverty experienced by billions around the world that snuffs out the chances of untold numbers of potential artists? Or just people being broke because they acquired an MFA instead of a business degree? I know writers who struggled to escape dire economic conditions they’d suffered since childhood, and though they respect their parents and their origins, they don’t want to return to that life if they can help it. Imaginative writing is clearly the worst plan for anybody desiring material success. Very few serious writers reach the point where they can survive from their writing alone. We work other jobs. I hit rough financial patches all the time because my income as teacher and a writer doesn’t quite do the trick, but it’s not by any stretch of the imagination poverty.

Poverty is not an appropriate condition for anybody. If you read the biographies, most writers of note came from fairly stable and often wealthy backgrounds. The exceptions, and there are extraordinary ones, prove the rule. Why did so many important writers originate in places where there was food and decent (for the time, at least) sanitation and perhaps some modicum of physical safety? Because they could get books and read them and think about them without the constant anxiety of deprivation. That would be my bet.

Certainly the experience of poverty has been fuel for some tremendous artists. I don’t know whether I’d call it appropriate. I think the appropriate condition for the writer resides in the realm of the inappropriate. The best writers are those whose approaches to the world and language are somewhat askew. They produce the kinds of distortions that break us out of the official lulling hum. What these writers might have in common is a feeling of being on the margins of things, and that can emerge from all sorts of conditions — physical, temperamental, intellectual, experiential.

Of course, I may have misread this question. Was the poverty meant to be metaphorical?

Is the experience of reading “Homer” lessened because the blind poet would have been mincemeat before the sword of Achilles? Cioran is one of my favorites, and beneath the dour veneer I always sense a bit of playfulness in such pronouncements. Much like Nietzsche, in fact. It’s what makes them durable. But I’ll take the idea at face value. One thing to remember is that our several selves emerge in different pieces of writing under varying conditions. Novels, essays, poems, they are all on some level tricks, cons, artifice, and letters are no exception. They just might emphasize other points on the spectrum of one’s song. And letters by well-known writers often have two target audiences, even if the letter writer won’t quite admit it: the missive’s actual recipient and, also, history.

Should the truth of one’s condition be related to the truth of one’s writing? I’m not sure it’s a choice. It just happens when the writing succeeds, even if the relation is oblique, as you say, or perhaps unconscious. But the relation needn’t be baldly stated all the time, in some confessional manner. The fiction writer, at least, creates the lie to contain the truth. Further, one’s condition also includes one’s desires, wish-dreams, prayers. The truthfulness, and perhaps the gallows humor, comes from exposing the gap between the yearning to be delivered from one’s condition and the sober understanding of the impossibility of that occurring. Cioran said some other things that have stuck with me. One is the exhortation to “write for gladiators,” which I interpret to mean one should write for those who understand the aforementioned gap. He also said that one never finishes a work, but simply turns away in disgust. I have made that turn many a time.

I am envious of other people’s money. That’s the sad truth. I don’t covet many material objects. I just want to know what financial security feels like — the knowledge that your children won’t be destroyed by debt, that you won’t be thrown in a ditch when you’re old. But I also know that very few people get to enjoy this feeling.

Every year I feel more trapped and useless. I have few skills. Years ago I was a very good dishwasher and an okay line cook in a rib house, but it’s all fled me. I am a teacher of creative writing. I used to be a substitute schoolteacher. There’s a Barry Hannah story where a man moves to New York without any credentials and establishes himself as a popular psychiatrist. He listens to people, and then encourages them to chase their desires. Or else to just act on their panic. I think I could do that.

One summer I agreed to join my best friend’s house painting crew. There were three of us, and it was a big house, and I really thought it would be a good payday, and once I proved my prowess, it would lead to more jobs. The other two were absolute pros. But I was a liability. I was a shitty sander, terrible with the brush, showed up late, and took too many breaks. Worst of all, I was extremely scared of heights. I’d be up on the ladder and slap a gob of paint somewhere and immediately scurry down. It was pathetic. I still feel shame about it.

Also, during college I thought I would hit it big in Hollywood because a buddy had a distant cousin who worked on the show, Charles in Charge. We had a literal pipe dream about selling a script. But we’d spend hours smoking pot, deconstructing the American sitcom. Nothing got written.

No. Not this world.

I have no idea. I would suspect there would be no way to know. Even if somebody told you about a strong reaction while reading your work — and people have — most people don’t say anything, good or bad. As for something occurring at a reading, I’ve been cheered, heckled, and one time a guy in the front row answered his cell phone and said these words while I read: “Hey. Yeah. I’m at a reading. It’s okay.” I guess the reactions I like most are the occasional gasps of recognition.

As for my emotional reactions to my work, I try to keep that to a minimum. It happens. Once or twice in the course of writing a book I’ll find myself laughing at something, or tearing up a little. But that’s usually a sign I should scratch that part out.

I hope it’s when I’m writing. More precisely, when I’m not trying to make a point.