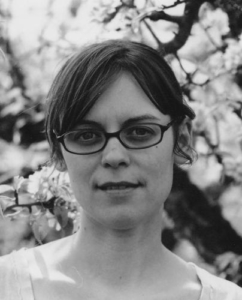 Alexis Smith is the author of one novel, Glaciers, that was published last year by Tin House.

My writing life is my personal life — I’ve always been a writer and I’ve always had literate, artistic friends and lovers — and I’m content with that, even if a life with other creative types can be crazy-making.

I quit my good-paying job with health insurance to write full-time. It was a tough choice; I had dental and vision coverage. I had paid sick time. But I also had more health problems working that job: I worked with children and the public, so I caught every disgusting winter snotfest that walked through the doors. I caught impetigo once, and the norovirus. I even caught whooping cough (word to the wise: get your booster shots). I was also more likely to be depressed and generally stressed out and have sleep problems working that job.

In the year since I quit my day job, I’ve gained 20 pounds from sitting on my ass in front of the computer all day. I developed an SI joint problem that made sitting excrutiatingly painful. I’m not kidding. I couldn’t sit. I started doing all of my work standing up. Then I started hiking and trail running a few times a week–something that I wouldn’t have been able to fit into my schedule as easily as a single mom with a timecard to punch. Now my SI is fine, and I’ve found that the running is incredibly good for my writing. In the end, I think that doing what I love is better for me than being an hourly wage-slave. But, I’m not as young as I used to be, so health insurance sometime in the near future would be great.

Suffering of any kind can bring out the expression of certain character traits in people. Empathy and sensitivity being big ones, which are valuable for artists. And ranges of experience are important for people whose work it is to express something meaningful about life. But this romantic notion that suffering financially is somehow integral to the creation of art is infuriating to me. Not having a stable, safe place to live, and access to the basic necessities of life, crushes individual human souls every living day on this planet. Can great art happen under these and other inauspicious circumstances?

Absolutely, and that is one of the great arguments for the necessity of art in the world — that it arises in even the most harrowing and painful situations. But it is hardly a prerequisite, and more often than not poverty is, in fact, an impediment to creative expression.

In terms of my life, I won’t pretend to know what real poverty is. I grew up working poor, with young, under-educated parents, became middle class through the continuing education and hard work of my parents in the 90’s, and now I, like many of my generation, am working class again. I consider myself working class because I work — yes, writing novels is work; we writers produce something that people want–and I am getting by, but only just. I have made sacrifices to be able to do what I love, but that would be true if I had had any number of callings. I know that I would be a more productive writer if I didn’t, monthly, spend several days freaking out about paying the bills. But just on a day by day basis, I know that my relative financial comfort, not my proximity to having nothing at all, is responsible for my ability to find the physical and mental space to write.

I can see how that would be an interesting lense through which to examine a body of work, but, generally, I think the work should, in the end, be allowed to exist on its own, apart from the details of a writer’s biography. Don’t get me wrong; I love biographical details. But the question seems to suggest that writers may be obligated to draw from their lives in very speciﬁc ways (the profound misery, in Nietzsche’s case? Why not only the strength of his imagination or the vigor of his intellect?), and anything outside of that is a sort of lie.

I write ﬁction for a reason. I borrow from my life, sometimes heavily. The “truth of [my] condition,” when you get right down to it, is that I have an overactive dreamlife, and instead of letting it stunt my emotional growth, alienate others, and compromise my sanity, I write. The truth of my writing is that, on a good day, it comes directly from the purest part of me, however removed from the baroque details of my daily life it might seem.

I have been envious of other writers, of course. Or, at the very least felt a little like the kid who didn’t get invited to the classmate’s party. This time of year is ripe for it, with all the “Best of 2012” lists compiled by reviewers and bloggers and editorial boards. I don’t dwell on it, though. Other writers are readers too, after all, and I’ve been on the receiving end of some incredibly generous fellow writers’ public support in the last year. I’d rather dole out the same whenever I get a chance. If I do feel a twinge of jealousy now and then, I just hush up about it and count the successes I can claim.

I’m sure I have marketable skills, just not especially lucrative ones. Whatever I have to do to pay the bills, I’ll always be writing, too.

Just a chance to make a living? Of course. And I think I’m one of the lucky ones who is getting that chance. Not everyone can be a writer, but not everyone can be a teacher, either, even when they get it in their heads to do it, because it’s a “marketable skill,” because they spent a lot of money going to school for it… Everyone deserves the chance to try something and either fail or succeed.

I think the world — or maybe just America? — needs to rethink the values we assign different kinds of work. We supposedly take pride in hands-on labor, making stuff and processing stuff and ﬁxing stuff, with blood, sweat and tears, yet we compensate the people who oversee the the making and ﬁxing of things more and more, and the actual makers and ﬁxers less and less. So fewer and few people are making a living wage.

I consider artists and writers makers. Also makers: baristas, farmers, teachers, carpenters, landscapers. Fixers: housekeepers, road crews, social workers, ﬁreﬁghters. People who sell the made stuff, the people who process the waste created by making and selling, they’re somewhere in these categories, too. I don’t want to get into the current ﬁnancial clusterfuck in this country, but I think Americans have been conned into believing that we should just be happy we have jobs at all, and not unpatriotically question the magnanimity and beniﬁcence of the “job creators.” The drop in wages for all of us over the last decades has been the most damaging thing to the economy, in my opinion, and the thing that drives the bitterness people feel about their jobs and the deferment of their dreams. When we’re all busting our asses just to make ends meet, then getting chastised in the media for not having more “consumer conﬁdence” or for taking out loans we couldn’t afford, it’s pretty easy to start thinking that we deserve better opportunities for success.

Every so often I get messages from veterans, and those are the messages that do me in. It means a lot to me that people who have been to war see something in Spoke that they recognize, and that they find comfort in Isabel’s desire to understand and accept Spoke for who he is.

I’m a slow writer, partly because I’m obsessed with language and partly because I want stories to read emotionally true. Most writers I know are a bit like method actors, drawing on their emotional memories to really feel what their characters feel as they write. In my next novel, the heroine’s father dies when she’s eleven. I cried my way through a paragraph. My father is alive and well, but I could still feel that eleven year old trying to make sense of the sudden void in her life.

Physical reactions can be startling. Sexy scenes, for example. I’ve never asked another writer, but I suspect I’m not the only one who needs to get up and do jumping jacks or something to get the blood flowing back to the brain…