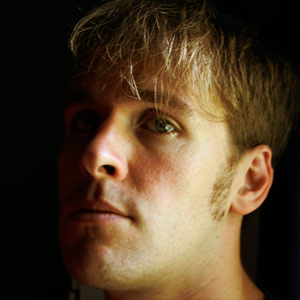 Blake Butler is the author of five books, including the novel There Is No Year and the memoir Nothing: A Portrait of Insomnia. His most recent book, Sky Saw, was published late last year by Tyrant Books. He edits HTMLGIANT.

I feel like I used to be more social or more interested in socializing. I also used to be more emotional. I don’t like to talk aloud now very often and keep most of my feelings to myself. It might just be I’m getting older but I think but I feel like spending five to fifteen hours a day almost every day for ten years alone in a room with a machine making shit up has flattened me out to some extent. I could live in the same day over and over as long as the part where I am at my desk from morning to dinner was constant.

Money and writing should have nothing to do with one another, for me. There is the working-for-survival part of the working brain and the working-because-I’m-working part of the brain. They are distinct. I have always found a way to make a living by doing work I could do from home, giving me time to do the work I wanted whether I got paid for it or not. There are more ways now than ever I think for anyone to not have to commit to a “real job” if you don’t want to, though part of this also is that I have decided I won’t have children, and that relieves a huge part of the American burden of provider. I can live comfortably on very little and do pretty much whatever I want whenever I want. This was a product of my deciding at a young age that this was the only way to do what I wanted to do, which was to be independent and own my time, which I guess has turned out to mean that I write for a large percentage of the day most every day.

I started writing because I was tired of considering my own reality. Anyone should be able to write about anything they want, regardless of where they’ve been or where they are now.

I think I wish American culture had more aesthetic values I could believe in. That said, I’m always happy when someone I admire or see good faith in accomplishes something they worked for, or that they wanted, particularly if I think they are doing something that isn’t readily accepted. In general, I’ve always tried to stay close to Dennis Cooper’s idea of, “As soon as you get some power, spread it around,” and I think a lot of the people I feel social association with share that feeling.

I always hate when people say, “I only write because I can’t do anything else.” It’s a little arbitrary to imagine that your only ability is lining words up on a page. There are tons of other illusions you can suck money out of, if you’re looking for money, or marketability. Hell, I was a computer science major when I started writing, I could probably own a ranch by now. As much as I beat myself up for spending so much time writing and reading and thinking about writing and reading, I do it because it’s to some degree become innate in me. I’ve never been a creature of change, so I’ll probably be doing it up till death, which is about as stable a thing as I can think of.

Why? I don’t tend to dote on shit like that out loud. My brain’s built with enough tendency for enabling guilt that I could spend every day mired in whatever, from wrong orders at Arby’s to wishing I had the body of an underwear model. People abuse the hell out of Beckett’s line about everything always being a failure. It gets kind of old. Obviously everything’s a failure in the Platonic sense, but many of my most favorite things in art come from the aura of it, the error in the person that let the perceived error in the art exist. Just as easily as everything is a failure, nothing is. What it comes down to then is taste, which is where I really start to feel alone when I start talking to most anyone for too long about. The aloneness is wonderful. I realize I didn’t answer your question at all.

It should make it as hard for me as possible.

All of my most emotional moments related to writing came during the periods when I go running while taking a break from writing with the residue still in my head. In that way, the words themselves, as a writer or a reader, have nothing to do with emotion. It’s the world.

When I can’t feel me in my brain or body.