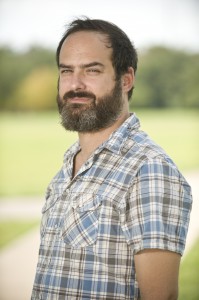 Neal Pollack is the author of Jewball, Never Mind The Pollacks, and, most recently, Downward-Facing Death. He is the most entertaining automotive journalist in America and one of the funniest people anywhere.

I think it’s been good for my health, for the most part, because writing makes me happy and happiness is healthy. It’s a totally sedentary profession, so I need to make sure to walk every day, but my blood pressure is normal and I have no important ailments other than a cranky lower back, which yoga helps alleviate a lot. I practice yoga regularly, which is good for whatever ails you. My health was not nearly as good when I was living in Los Angeles trying to make it as a screenwriter. Despite a superficial layer of health, L.A. is actually a really unhealthy place to live because it’s stressful and expensive and there are a lot of drugs. Now the pressure is off and though I miss the L.A. lifestyle sometimes, leaving has made a big difference in terms of my day-to-day wellbeing.

As for my personal life, I’ve been married for almost 13 years, and have been a professional writer for all of them. My wife is my biggest support and biggest champion, so no negative effects at all.

I think being middle class is about right for me as a writer. I have enough money to be able to sit and think for a few hours, but not enough to put on airs or blow off my work. It’s never a struggle, say, to have enough to eat, but I need to sit down at the computer every day and pound out the words because I have financial obligations to myself and my family. Having bills to pay is a great motivator.

The “truth of one’s condition” is awfully subjective. We all suffer in one way or another, and to me, the key to good writing is getting to the core of that suffering and turning it into art. It can be comic art, or tragic, or both, but at its best writing gets to something real about what it means to be human. That’s true whether you’re writing from a studio apartment or a villa overlooking the Mediterranean.

I’m not necessarily envious of other writers, because I know that they have to sit down and hack it out every day just like I do, unless they are empire-builders like Tom Clancy and James Patterson, who are so far out of my league that it’s not worth thinking about them. And if a midlister occasionally breaks from the pack, I can only think, well, good for them, I know what that must have taken. My envy, strangely enough, settles itself on comedy people, sitcom writers and creators and successful standups and the like. Their work is close enough to fiction writing that I see in them a path that I might have taken to bring myself fame and riches. It’s an unhealthy, unhelpful emotion, but it’s there, and I’m constantly having to check my negative thoughts and actions.

I went to journalism school, so I’ve always been able to do magazine hackwork if I have to pay the bills. Half my money last year, just about, came from writing car reviews. And I was damn glad to see those checks. I’m still doing it, and I really enjoy the work. But even if that were to turn into a full-time gig, which it always could, I will not stop writing fiction for anything. Whatever hope I still have of leaving a legacy lies in my novels, and I’ll keep slamming them out until the day I die.

My memoir Alternadad got optioned by Warner Brothers for a decent amount of money, and they paid me to write a draft of a screenplay. No one read that draft except for my manager, but the check came in and suddenly I had a bunch of money in the bank. Instead of just enjoying the ride, my wife and I decided to sell our house, pitch our stability, and move to Hollywood. I had a couple of sitcom pilot deals, but after the writer’s strike of 2008, everything dried up and I became totally discouraged. Everything collapsed, I went broke, and I just gave up. I was forced to abandon my dream of making it in Hollywood and to begin a retrenchment period, which is ongoing.

This is hardly a tragedy, I realize, and hardly original, but until Hollywood kicked me hard in the nuts I’d always thought that I would succeed massively at whatever I tried. Instead, I was just another guy, and it’s challenging to accept that fact when you think otherwise of yourself. I took a risk and I failed, massively. I’m still coming to terms.

No, but it would be nice if there were more government grants for writers and artists or at least single-payer healthcare.

I got an email just today from a guy who said that I interviewed him once for a stupid magazine blurb about his Chicago bar in 1995, and that my slovenly, semi-disgusting appearance and apparently genuine attitude toward the craft made him rethink his life, quit everything, and pursue the writing life. I feel sorry for the dude! But I spend my entire life chasing rainbows, so who am I to dissuade him. I also hear from time to time from people who tell me that my work has encouraged them to try yoga or continue their yoga practice, so that’s nice.

As for the strongest reaction from myself, I try to make myself laugh or at least smile every day. If I can write a funny sentence or paragraph, then I’ve had a victorious session.

I’ve written some very “truthful” nonfiction, and I like some of it, but I feel like I can be more honest in my fiction. There, I can say what I really think about things and people. When you’re writing nonfiction, you have to be more circumspect because there’s so much more opportunity for real-world drama. Which is fine if you’re an investigative journalist trying to right social wrongs, but not so fine if you’re just trying to sell your memoir-story to the world. That just creates drama among friends and family members, and my life is dramatic enough. I want to write my fiction and then take my dog for a walk. Like I’m going to do right now.