Literary Television vs. Literature on TV

Many have declared the last few years of television a “renaissance”, with shows like Mad Men, Breaking Bad, and The Wire widely acclaimed and praised as literary, usually accompanied by the term Dickensian. While Dickens and other pre-television broadcast authors did publish works of fiction episodically in mass media print publications as a form of popular entertainment, the assertion that a TV series may be “read” as literary narrative hinges on the perception of these shows as highbrow realism. Last year, Salman Rushdie told The Telegraph much the same; unlike mainstream movie-writing, American television is not “dumbed down” to entertain mass audiences but written with “the kind of control over plot and characterization previously enjoyed only by novelists.” Even recent college courses have taken television series as their primary subject matter, encouraging students to approach their favorite shows with the same critical approach with which they would a classic novel. The implicit contrast is that of reality TV, but a reality TV show featuring competitive author performances could flip that construction on its head.

In order to film their Kickstarter-funded two-episode pilot, creators of the television show Literary Death Match overcame the perception that literature is primarily sober in tone and complex in presentation, incompatible with scripted unreality television, and therefore untenable as popular entertainment. The series, filmed 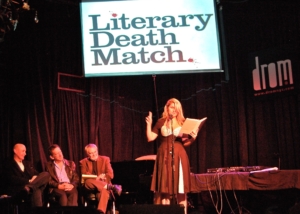 by Todd Zuniga, Elizabeth Koch, and Dennis DiClaudio in 2006, takes place in diverse locations around the world and features fiction writers trying to out-read each other with their own material before a panel of judges. Novelist Jonathan Lethem, comedian Tig Notaro, musician Moby, and actor Michael C. Hall all played referee in Hollywood last week outside a real boxing ring, where writers duked it out for high scores in quality and delivery. If this sounds as dull as a middle school spelling bee, Literary Death Match purportedly “marries the literary and performative aspects of Def Poetry Jam, rapier-witted quips of American Idol’s judging (without any meanness), and the ridiculousness and hilarity of Double Dare.”  Melissa Goldstein reports in The Daily Beast that “In the absence of confrontation, there were clever bells and whistles: sexy librarian–styled ring girls and elaborately quirky tiebreakers involving a game of ‘pin the mustache on Hemingway’ and a vegan cupcake toss.”

But comedic spectacle and is only part of the appeal. As par the medium, some of the show’s potential lies with sex appeal and a fabricated intimacy with the filmed subject. As Goldstein puts it,

“These people — the ones whose books and New Yorker essays you take to bed with you — are real- life people you just might want to take to bed with you. Or hang out with. Which, if you didn’t  realize, are two of the most compelling motivations for watching people on reality television.”

Of course, Literary Death Match may never be broadcasted on television. Even if Literary Death Match is picked up by production agencies, the program will most likely air on a network with less viewership – and thus, less power of celebrity creation – than those which produce shows like The Voice. Even the notion that fiction writers might warrant a television audience, however small, outside of the talk-show format might would be a boon for writers, though. J.K. Rowling, one of the most famous living writers, may be a household name — but even hers still fails to evoke tabloid interest the way Kardashian does. Not that tabloid interest is what writers want or should shoot for, but I’m sure most wouldn’t complain about a little more mainstream exposure.

So, let’s hope that Literary Death Match gets picked up. Not because it will turn writers into celebrities, but because literature is not just for realists. It’s magical, absurdist, experimental, even plebian; it can be hilarious and irreverent and at odds with deceptively fluid notions of “highbrow” versus “lowbrow” entertainment. Perhaps Literary Death Match wouldn’t revolutionize reality TV the way literature as a symbolic language revolutionized our viewing of television dramas like The Sopranos and Treme, but there’s no reason the reality TV format couldn’t express diverse aspects of the literary community; after all, the live event has already proved popular. In any case, the worst we’d be left with is bookish eye-candy, outrageous action, and silly jokes; all things that even the most serious members of the literati should be able to get behind.