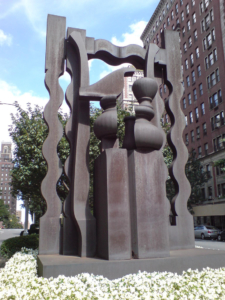 I could see the sculpture from my bedroom window. I always had a vague sense that it was there, on the median of Park Avenue —blackish, about two stories high, abstract.

It looms in the background of a few childhood memories: blanketed with snow during the Blizzard of ’96, it sets off the gray snowman my sister and I build in the street. And it shines black behind us on a bright spring day in ’98 or ’99 as we crouch in front of the red and yellow tulips. Our mother snaps a photo.

Occasionally my parents would refer to it as a landmark when directing non-New York natives — unaccustomed to the grid — to our apartment. To friends from Colorado, or parents of suburban classmates (in addition to our address and cross streets): “It’s the one with the green awning and the big black sculpture out front. You can’t miss it.”

But despite seeing it on a daily basis from ages 5 to 18, I never actually looked at it. It occupied the same sort of unarticulated mindspace as would, say, the form of a Rorschach blot, or the long, unpronounceable name of a recurring character in a Chekhov play I was reading.

In my teens, I learned it was by the sculptor Louise Nevelson, but I didn’t know what it was called (and I never wondered). I continued to gloss over it.

When I returned home from college for a vacation in February 2011, I noticed immediately that it was gone. For me, its absence was unexpectedly distinct and palpable, more so than its presence ever had been. It left behind a spatial vacuum that threw the familiar landscape off-balance. I realized that I missed it. I started wondering aloud about the sculpture — Where did it go? When would it return? My mother said she had watched a crew disassemble the sculpture, and that it was to undergo restoration.

As more time elapsed since its disappearance from my neighborhood, I have become more curious about the sculpture’s origins, and its creator. I learned that Louise Nevelson (née Leah Berliawsky) arrived in New York City in 1922, a Russian immigrant and new bride beginning her formal studies in art. By the time she created Night Presence IV in 1972, she was a mother, a divorcee, and a leading contemporary artist. She was known for her monochromatic sculptural works — in particular, for the several large-scale pieces she designed for outdoor display in New York.

In fact, Nevelson donated Night Presence IV to the city in honor of her 50th anniversary of living and working here.

“New York represents the whole of my conscious life,” Nevelson said at the time, “and I thought it fitting that I should give it something of myself.”

In February of that year, Nevelson saw Night Presence IV installed temporarily at 60th Street and 5th Avenue on what is now known as the Doris C. Freedman Plaza, home then as now to a rotating display of public art. (Nevelson wore a dark fur coat and a hat resembling an equestrian helmet to the installation, and posed for photographs with Mayor John Lindsay and Parks Commissioner August Heckscher.) 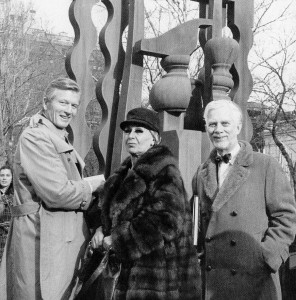 After this initial exhibition period, Nevelson selected the Park Avenue mall at 92nd Street to be the sculpture’s permanent site. (She was also present at this installation in December 1973, wearing a magenta patterned coat with fur trim, large bead necklaces, and boxy sunglasses, with the same hat.)

Nevelson would surely have been distraught at the sculpture’s prolonged absence from her hand-selected site.

Night Presence IV is made almost completely from cor-ten steel, Kuhn said in a recent phone interview. He said the metal was popular with sculptors working in the ’60s and ’70s (incidentally, it is also Richard Serra’s material of choice). When allowed to weather outdoors, the metal oxidizes to produce a coat of reddish rust.

The problem, Kuhn said, is that the natural erosion does not stop there. (“But one person’s corrosion is another’s patina,” he added.) In 2003, the Citywide Monuments Conservation Program, an arm of NYC Parks’ Art & Antiquities, began to check Night Presence IV for weather damage inherent to most cor-ten pieces, and to monitor the condition of the sculpture on an annual basis. By 2008, there was visible damage to the sculpture’s exterior, and the Conservation Program team proposed a restoration plan. They determined that the repairs would cost $140,000, an amount that would have to be raised almost exclusively in private donations.

But Kuhn said it soon became clear that the sculpture was deteriorating even more quickly than expected: “When advanced corrosion (much of it internal and invisible to the public) was detected, and appeared to be rapidly accelerating, the piece was dismantled [in February 2011] as an emergency precaution in advance of the fundraising campaign,” he wrote in a recent email.

The disassembly my mother had witnessed almost two years ago revealed internal damage that stunned the restoration team: “When we opened it up there was just air,” Kuhn said. “The entire central section was a pile of iron dust that had long since washed away.”

Under the direction of city conservators John Saunders and Christine Djuric, the larger pieces are currently being restored in a warehouse on Governor’s Island, and the smaller units are at the Parks Monuments Repair Facility, a city-operated workshop in Brooklyn. The refurbished structure will be reinforced internally with stainless steel rods to secure the welding at junctures, Kuhn said. Where the metal had corroded completely at some internal sites, there will now be cavities that allow for air circulation and water drainage, as well as a “corrosion inhibiting coating system.” The team might even add a rear hatch to facilitate future inspections.

Kuhn said that the restoration work is about half-completed, and $116,000 of the required $140,000 has been raised to date. His goal is to complete the major restoration work by late winter or early spring 2013, at which point, hopefully, the sculpture can be reassembled.

But it would not return immediately to 92nd Street: first it must be allowed to weather for several weeks on Governor’s Island so that its coloring “evens out,” Kuhn said. “[Conservator] John [Saunders] likes to say that it’s like when you get plastic surgery, you have to allow the scars to heal before you go out in public,” he said.

By summer 2013, Kuhn hopes to see the sculpture reinstalled at 92nd Street — if both the weathering and fundraising processes cooperate. (What would Nevelson have worn to a summer installation? The same hat, surely.)

Still, Night Presence IV continues to boggle me even in its absence. I recently came across a blog post that (harshly) characterized the piece as “hardly [Nevelson’s] most ambitious work, and some of the forms — the dove, the squiggles — give it the look of a decoration for the United Nations delegates dining room.”

I stared at a photograph of the piece. Oh, that’s a dove?

If and when Night Presence IV returns, I plan to look at it. Hard.