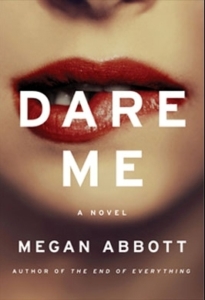 Beth Cassidy, one of the primary antagonists in Megan Abbott’s Dare Me, could easily be added to this list. Running through all of these characters is the way they draw upon our dark fascination with the perceived power of teenage girls. These not-yet-women who still have curfews and require hall passes — what is it that makes them so goddamned scary?

Maybe it’s that girls like Beth, a cheerleading captain and five-foot-one dream-crusher, learn to turn the vibrating fury of their insecurities outward. Locking on like a homing missile, Beth has a flair for pinpointing her competitors’ (and allies’) deepest fears — and the savage ambition to go for the jugular.

But while Beth may be our enfant terrible, it is sixteen-year-old cheerleader Addy Hanlon who is our entree into Abbott’s suburban noir. Addy has long been Beth’s best friend and faithful second-in-command. But the introduction of a new cheer coach, Colette French, throws the entire dynamic into chaos. While their previous coach may have been cowed by Beth’s air of authority, French won’t be so easily swayed. Her opening power play is to toss out Beth’s lazy, uninspired “booty shaking” routines in favor of physically punishing maneuvers. Coach French browbeats the squad into shape, critically eyeing their waistlines and blithely encouraging one girl to indulge her bulimia. Beth is pissed. Not that she’d bat an eyelash if the entire squad puked up all their vital organs. But it’s still her team; her hold over tight circle of power is loosening, and Addy — her Addy — is in thrall to Coach French.

For Addy, winning Coach’s trust and affection becomes an all-consuming goal. Temporarily freed from the strictures of being Beth’s lieutenant, Addy embraces Coach French’s relentless pushing. Putting her body through its paces, turning it into a hard lean impermeable muscle, will grant her transformation. She will be exalted and invulnerable:

Did she look at us that first week and see past the glossed hair and shiny legs, our glittered brow bones and girl bravado? See past all that to everything beneath, all our miseries, the way we all hated ourselves but much more everyone else? Could she see past all of that to something else, something quivering and real, something poised to be transformed, turned out, made? See that she could make us, stick her hands in our glitter-gritted insides and build us into magnificent teen gladiators?

This unspoken promise takes root in Addy, flowering with every sweaty-limbed back tuck. Beth may give her love and a sense of place, and curly-haired runner Jordy Brennan may give her a brief thrill, but Coach can give her herself. When Addy, along with the other cheerleaders, is invited into Coach’s beautiful suburban home to drink and carouse, she revels in their newfound intimacy. This slow, concentrated reforming of her identity makes her giddy. This is what she has craved — not clumsy adolescent groping or a sense of self dictated by Beth’s whims. It’s not the same power that Beth thrives on, the kind secured through persistent ruthless intimidation, but self-possession: the ultimate power. Addy is as intoxicated by that as by the vodka shots Coach serves up on her back porch.

But Addy isn’t blind or stupid. She sees how Coach’s husband, Matt French, hovers phantom-like on the periphery of their merrymaking, never joining in. He tunes out the din of their drunk-girl laughter with computer solitaire. No expensive duvet or lovely tow-headed child could conceal their mutual loneliness. But the spell remains unbroken, even when Addy and Beth discover Coach and army recruiter Will Swenson having sex. Addy stares at the blissful expression on Coach’s face and calls it “the most beautiful thing [she’s] ever seen.” Beth is just pleased to finally have the upper hand, a piece of information she can hold over Coach.

And it is this swirling power struggle  — Beth and Coach tug-of-warring over Addy — that drives the novel toward its climax. It is easy to imagine Coach as the adult analogue of a powerhouse like Beth. After all, no one can stay an eighteen-year-old queen bee forever. What happens when teenage power fades, maturing into sedate adult ennui? Coach has married into an idyllic life of manicured lawns and tastefully decorated homes, her existence a series of negotiations with a sticky-faced cherub. But here’s the problem: desire for self-determination, for control even in one’s small dominion, never vanishes. She may bargain with Beth, but she won’t give in.

For her part, Beth, whose savvy occasionally borders on the unbelievable, is a virtuoso of manipulation. She holds sway through gleeful teenaged menace, possibly provoking a brutal army comrade of Swenson’s into rough sex, complete with bruises, so she can later claim rape. Elaborate high-stakes schemes to remain on top — with her squad, with Addy — are practically a cinch. Her slight tweaking of Addy’s insecurities seems tame by comparison. But so skilled is Beth that when she finally does reveal some vulnerability to Addy, it’s hard not to be incredulous. Can such a powerful girl really ever feel weak? And would she tell anyone if she did?

This could not properly be called a noir without a murder. But would you be bothered if I told you the murder — the whodunit, the whys and wherefores — is the least interesting aspect of this novel? It’s the human drama of Coach and Beth, who are grasping for control of their lives, and Addy, who wants control of herself, that gets under the skin. These are the characters who do the heavy lifting and the story is shot through with their love and their desire and their jealousy — but, oddly, they are pushed to the margins as the murder resolves. Almost as if their own story, and the power to tell it, has slipped through their fingers. We leave them as we found them, untouched but not unbroken.