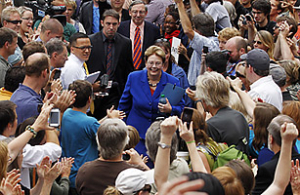 A little over two weeks after President of the University of Virginia Teresa Sullivan was ousted from her position by the Board of Visitors, she was unanimously reinstated yesterday.

UVA’s first female rector, Helen Dragas, walked into the meeting with Sullivan, the university’s first female president, in what seemed an excellent bit of academic theater. What had been described as a “philosophical difference” about their envisioned future for the university was, apparently, no more. ”It’s time to bring the university family back together,” Dragas said, just when you thought things couldn’t get more like a made-for-TV-movie.

During the past two weeks, battles usually limited to the “Academical Village,” as Thomas Jefferson called the university, reached a wider audience as outrage manifested in the form of pushback — letters, petitions, group protests — and satire alike. The online battles were full of rage-inspired humor: a local Charlottesville paper translated Dragas’s initial statement of bureaucratic nicety and corporate-speak “into plain English,” while @RectorDrago — a belligerent parody mash-up of Dragas and the Rocky IV villain Ivan Drago — trolled all support for Sullivan on Twitter.

But the widespread and unbelieving fury speaks to larger issues. The world watched in horror as the massive national trend of corporatization staged a coup in the ivory tower. Presidents have been dethroned — the corporate model has been infiltrating the university for years — but never so flagrantly, and the secrecy of the plot was matched in insidiousness only by the blame then launched at Sullivan.

Because she hadn’t dismantled the all too familiar culprits of unprofitability — such as the Classics and German departments — and because she’d been carefully studying innovations such as online education rather than making game-time decisions blinded by visions of “growth” and “progress,” Sullivan was charged with not moving fast enough (versus her self-defined “incrementalism,” what others described as a “relationship-based, relationship-centered presidency”).

Academics are not safe from strategic top-down government-style take-overs. While students protested exorbitant tuition increases and crippling debt policies, their professors, who cared deeply enough about their education, were having more and more trouble defending their own interest in ideas over money. Therein lies the “philosophical difference.” In a world increasingly run by money as power, the last safe spaces for the pursuit of knowledge as an end are being taken over. Ironically, Sullivan is a highly respected sociologist who specializes in class dynamics and the role of debt in society.  She is no stranger to the forces that were being arrayed against her.

Public universities have been in trouble for a while. “The staggering reduction in financial support from the state puts a lot of pressure on campus,” warns President of the American Council on Education, Molly Corbett Broad, in the New York Times. “There’s increasing politicization of governance. And there are rising expectations that universities will transform themselves very quickly, if not overnight. Somehow, they’re supposed to achieve dramatic improvement in learning productivity and at the same time reduce costs by using educational technology.”

Figures, however imperfect, on the total state appropriation per student at public flagship universities — as well as numbers on educational subsidies for these same schools — show a definite decline from 2003 to 2008. And that’s before the recession.

Until yesterday, the decision that Sullivan would leave was defended by Dragas and others on the Board of Visitors. It gradually became clear that one of their central complaints — not that they were clearly articulated — had to do with wanting a faster-paced implementation of new media technologies in teaching, particularly in online learning.

But, as Johann Neem explains, “there is nothing inevitable about how new technology is used, what its goals are, and who will control it: these are all matters that some one — or some group — will decide.” The concept of “disruptive innovation” — that new technologies produce moments of turbulent transformation — is, Neem argues, the new justification for an age-old power grab that criticizes higher education and works to limit liberal arts, and humanities in particular, in favor of more market-based programs.

Reacting to recent events, Newfield argues that Sullivan mistakenly described her “collaborative method as incremental and conservative. This kind of rhetoric allows the Board to define her as slow and inadequate in a time of rapid change, and to justify executive authority as that which is bold and decisive.”

This is all coded anti-intellectualism. The belief that thought for thought’s sake, art for art’s sake, knowledge for knowledge’s sake are public goods is currently a value system assailed from all sides. I believe that anti-intellectualism is a long-standing problem in American culture, and the corporatization of the university is one of its contemporary manifestations. And the hubris of these people, like Dragas, thinking so little of the vast expertise built up in a person like Sullivan! It never seemed to occur to them that their model might not work everywhere (nor did it occur that Sullivan is likely to know what she is doing). This corporate hubris made them believe that they knew more than Sullivan about how to run a university. And that is a pernicious form of anti-intellectualism.

A “pen and pencil and paper culture,” is how Lisa Russ Spaar, a creative writing professor at UVA, describes her classroom after a student noted the “unpredictable ‘pen-clicking’ moment in each workshop, when something someone said set off mental fireworks worthy of being written down.” New technology surely has a place in this culture. But how and why it is introduced is the important part. Learning is incremental. It is also rapid-fire explosion. But it happens best in the company of others who value it, and under the expertise of those who care enough to foster it with a compassionate desire to wrestle with questions of how best to move forward.

One good thing can come of all of this: that other Boards will think twice before asserting their corporate hubris. The mobilization of the community was truly outstanding, and should be celebrated. But the recent ousting at UVA is only a symptom of a cluster of problems that will not be resolved by the achievement of Sullivan’s reinstatement. This is an important victory, but the war against intellectual corporatization continues.