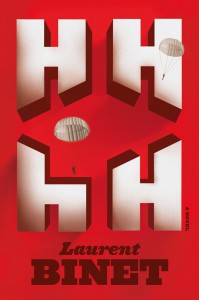 Imagine a history textbook makes you weep. Now imagine trying to tell someone about that experience, while maintaining perfect allegiance to historical facts. And if you couldn’t — if you had to add details or invent motives — would you feel like you betrayed those who lived the events? HHhH, Laurent Binet’s debut novel about the attempted assassination of Nazi Obergruppenführer Reinhard Heydrich in occupied Prague in 1942 is, to its final pages, preoccupied — obsessed even — with these questions.

The novel is narrated by a present-day boyish historian attempting to write a historical novel about Jozef Gabčík and Jan Kubiš, a Slovak and a Czech, parachuting into Prague to assassinate Heydrich. Heydrich is the character that the narrator seems most compelled by, but the historical narrative is far from the centerpiece of the book.

The text is almost entirely one to ten paragraph vignettes describing either historical anecdotes, the narrator’s experience of researching and writing, or some amalgam therein. Anxieties about writing are central to the novel, including but not limited to the narrator’s research, his personal library, his opinions on reconstructing dialogue, and the precision of certain details (was Heydrich’s Mercedes actually black or just very dark green?), which all rival the historical plotline in terms of importance.

” . . . It’s better for me not to know more of the details [of Heydrich’s life]” the narrator remarks while debating whether to acquire Heydrich’s wife’s memoirs. “That way, I won’t be tempted to share them.” While the garrulous narrator is correct to be suspicious of his ability to restrain himself, there is an irritating smugness to his self-deprecating rhetoric. His attempts at unpacking his flaws are colored with an I’m such a schmuck ha-ha tone.

Smugness aside, the narrator’s fears about fact and accuracy dominate his reading of other texts. This means that for an ostensibly literary novel, its treatment of other works is usually profoundly unliterary. On Jonathan Litell’s The Kindly Ones, he remarks “If Blobel really drove an Opel, then I bow before his superior research. But if it’s a bluff, that weakens the whole book . . . I’m driveling aren’t I?” But perhaps it’s not surprising that the narrator’s concerns aren’t particularly literary, given that the novel’s prose (in translation at least) leaves something to be desired. Of one of the assassins: “With his handsome movie-star face — imagine a hybrid of Cary Grant and Tony Curtis —Kubiš was always a hit with the ladies.”

The narrator’s invented dialogue (always nested in hemming and hawing about the legitimacy of inventing dialogue) is the stuff of trashy movies: men threaten to “rip” each other’s “balls off;” refer on multiple occasions to licking each other’s asses. The narrator himself speculates about SS officials wiping their asses with their extensive collections of documents. As he worries about whether or not to invent dialogue (while simultaneously doing so) we see that these hyper-masculine, aggressive, cliché-ridden exchanges are the narrator’s idea of exciting or gripping dialogue.

The narrator’s personality is worsened by his treatment of women (or lack thereof), whom he cannot describe beyond their looks. He rhapsodizes about the beautiful women of Eastern Europe and his Eastern European girlfriend before returning to serious man-issues (i.e. secret missions, historical accuracy, accusations of ass-licking).

Bad personality, bad prose, and sexism aside, the narrator’s anxieties about how to novelize history are legitimate. Strangely, he is unable to make these issues really compelling despite their centrality. There is a narrative rhythm to his outbursts: he will relay a historical scene and then revoke some piece of information as uncertain, or confess that he invented the dialogue, or inject some other doubt about the “truth.” For all of his wild imagining about history, the narrator leaves himself few imaginative possibilities within the realm of truth. He seems to hold (but doesn’t actually articulate) a belief that there is such a thing as “real” history, some sort of exhaustive set of facts that can either be delivered in full, in part, or substituted with inaccuracies, and that narrativizing is for these reasons unethical but so delicious he cannot resist. His failures as a novelist (since we are reading a novel that the narrator supposedly is writing) and prose stylist render the book decidedly un-delicious, and his laziness as a historiographer mean that his concerns largely come across as self-indulgent and boring.

All this mediocrity is braided into a story that addresses the Holocaust. The narrator makes one historical argument in the novel: “All the same, no one ever manages to persuade [the assassins] that Heydrich’s death was good for anything. Perhaps I am writing this book to make them understand that they are wrong.” Here is another legitimate concern and a real question — was the attempted assassination worth the massacre of Lidice (a small village that was literally bulldozed as an arbitrary retaliation to the attack on Heydrich) and the torture and execution of many, many others?

There are arguments to be made on either side — HHhH invokes Raul Hilberg and mentions different factions within Holocaust studies — but the novel, obsessed as it is with events and facts, is unable to engage with such questions. Instead, Binet’s narrator conflates his obsession with these characters and their actions with some kind of ennobling of their choices, landing somewhere near the mark of the tedious “it was a just war” argument, apparently without even meaning to.

You’re allowed to have a slightly odious narrator, even an insecure, inarticulate mansplainer. It’s fine to write a novel about history that’s actually about writing a novel. It’s even okay to sometimes invoke massively consequential historical events without actually addressing them, instead dwelling on one’s own anxiety. But the hope is that choices like these feel as if they are made by the author for a reason. Binet has offered few clues about his decisions and one worries that he actually believes his narrator to be charming and his novel to have adequately addressed historical issues — in which case he has made an error.