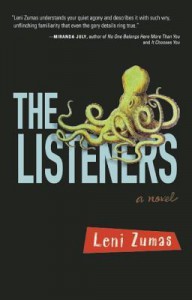 Quinn’s not the most stable person in the world. But who could blame her? In addition to her current issues (being flat broke, facing eviction, and working for a soon-to-close bookstore), she can’t escape the gory memories of her past. In childhood, her sister was murdered mere feet away. Years later, her lover and bandmate Cam was maimed in a horrific accident that she caused.

Now in her mid-thirties, Quinn’s heightened sense of awareness makes her fixate on the strange and quirky in her everyday life, like her cigarette man with two thumbs on his left hand, or the dude dressed in a cape who consistently visits the psychic near her home. But this awareness extends to her own psyche in a way that’s often self-destructive.

After her sister’s death, Quinn became fixated on the idea of a giant worm out for her blood, a delusion so strong that she became anorexic to escape her period. She has since recovered, but when she learns that Cam is back in town, teaching law classes, she feels the presence of the blood-worm return. Even as she tries to contact him, she’s struck with memories of the past, along with the persistent idea that her sister wants her down in the underworld.

The book is set up in snippets: each chapter runs only a few pages, or paragraphs, or sentences. The precise, vivid wording adds significance to each detail. Even a rat in her apartment walls is poetically portrayed: “The animal’s nails were longer than its teeth; body thumping sheetrock as it ran.” Quinn’s synesthesia also makes for beautiful descriptions. Remembering her first favorite band, Quinn thinks: “The sounds this band made were torn wings, crusts of glitter hills, valleys of black flame, clouds cut in three by red lightning, bluish brain rising from cankered feet.”

The chapters jump around in time: from the present, back to Quinn’s childhood when her sister is still alive, to high school when she’s meeting her future bandmates, to their shared experiences on the road. There are fan letters, diary entries, and eerie, descriptive stories that seem like dreams or nightmares. The two main threads are her sister’s death and Cam’s accident, which are revealed in small glimpses throughout the chapters.

The mélange of information is surprisingly coherent, and unflaggingly intense. As children, Quinn and her two siblings play savage and suggestive games, like the sisters leaving their tied-up brother in the closet, or all of them playing “would you rather” with violent deaths. Quinn’s sister’s death plunges their family into a surreal existence in which their mother refuses to utter her deceased daughter’s name at the dinner table but collapses and weeps for entire days on end. Quinn and her high school romance with Cam, and their band’s time together on the road, is told mostly in what happens on the road: staying at peoples’ apartments, eating in diners, fighting in the van.

The issue that arises from the book’s format is simply the amount of information being transmitted in such short bites. Woven into the major narrative is Quinn’s synesthesia, her horror at detainees being tortured at Guantanamo Bay, her issues with her parents and brother, her reliance on her stuffed octopus “Octy,” her bandmates’ current lives and problems, her phobia of pancakes, her tinnitus, her self-mutilating, her obsession with video games, etc. When breakthroughs do occur — with her brother, or her parents — they pass too quickly to leave a strong impression. Occasionally, information is altogether missing. The death of Quinn’s sister remains puzzling through the last page.

Despite all the dark subject material, there is humor throughout, often because of Quinn’s separation from the world around her. During a fight at her family’s dinner table, Quinn thinks: “I considered getting up from the table. I had done some storming out in my time, but I felt too lazy for it now.” But even more satisfying is the humor that arises from the softness Quinn feels for certain characters, including her younger brother and her bandmate Mink’s daughter.

The Listeners is Leni Zumas’s first novel; her first book, Farewell Navigator, was a short story collection about outcasts. Quinn is certainly an outcast, but her strengthening connections toward the end of the book leave one with hope that she’ll be able to free herself from the ghosts of her past and focus on those in her present. Although, with her dark and poetic sensibilities, this might not be something she’d prefer.