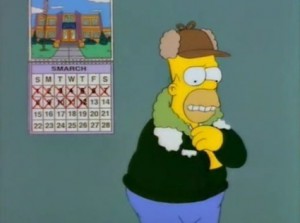 Gregorian leap day is a simple enough concept: the earth takes about 365 days and six hours to make a full revolution around the sun. Rather than starting our year a quarter of the way through the 366th day every year, we even out by adding a day every fourth year. Leap day generally comes and goes with little or no fanfare, save the occasional TV special and last-minute schedule adjustments when you realize that this year has that extra day.

Leap day hasn’t always been a given, though, since the Gregorian calendar hasn’t always been a given. Implimented by a 1582 Papal bull as a reform to the Julian Calendar, it wasn’t adopted by Britain until 170 years later. Those largely Protestant nation-states in Europe took umbrage to a Catholic calendar, and some took over a century to warm up to the idea. Three years after the dissolution of the Ottoman Empire, Turkey became the final country to implement the Gregorian calendar.

A calendar does more than measure our position in relation to the cosmos — it has to do more, since the cosmos are awfully remote. Signposts within the year — holidays, anniversaries — help us tether our lives to a larger temporal framework. It’s effectively a kind of assimilation, taking on the calendar of another culture. From one person to entire religions, we distinguish ourselves by the ways we mark time. Occasionally, groups will reject the Gregorian calendar outright as an act of liberation or rebellion — both the French Revolution and the Paris Commune broke with the Gregorian calendar in favor of the French Republican Calendar, comprised of twelve 30-day months and five national holidays at the end of the cycle (six days in the event of a leap year). The first time this calendar was implemented, it lasted twelve years. Its implementation in 1871 lasted 18 days. It’s both curious and telling that the U.S. didn’t attempt any calendar reforms during its revolution. In a grotesque analog to this kind of calendarial iconoclasm, the U.S. and Canada (ONAN) in David Foster Wallace’s Infinite Jest operate on subsidized time, in which each year is sponsored by a product (e.g., Year of the Whopper, Year of the Depend Adult Undergarment, Year of Glad). Heavy-handed as it is, it’s a brilliant illustration of the triumph of rugged individualism and corporate/capitalistic gain over matters spiritual, etc.

Against the backdrop of the hegemony of the Gregorian calendar, there have been multiple ideas for calendar reform. I’ve gathered a few here:

Overall, though, at this point it’d be tough to make a complete switch from the Gregorian calendar. It’s become a matter of convenience, not one of politics. And it’s been so long that the calendar itself has become secularized. Either way, it might be tough to get used to Smarch coming in like a lion.