“I am Thyrsis of Etna/blessed with a tuneful voice”

That declaration was my introduction to Cy Twombly, and for some reason it’s the line I keep repeating as I think of his life. (I first came across it at the Hamburger Bahnhof museum of contemporary art in Berlin, where I fell a little bit in love with this painting.)

Cy Twombly passed away yesterday in Rome at the age of 83, from cancer. When I heard the news, I was saddened to realize that while I’ve always loved his drawings, I still don’t know all that much about Cy Twombly’s life and work, beyond his recognizable scribbling style, his awesome and painterly allusions to myth and mythology, and this one scandalous story.*

But while I can’t give you a run-down of his life, I can still show you a few pieces by Twombly that I love. (Click to enlarge.) 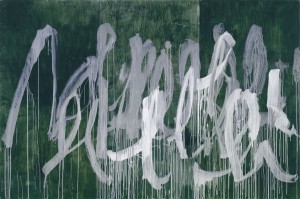 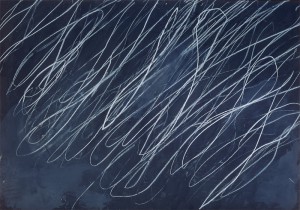 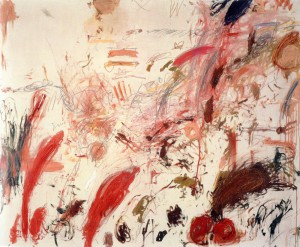 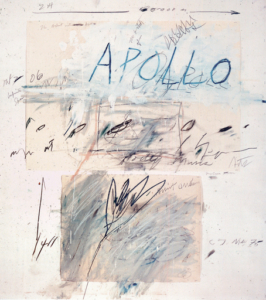 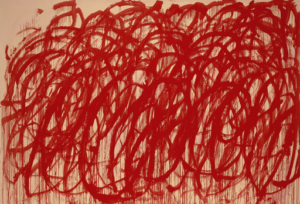 To my surprise, I’m finding out now that Twombly was a very controversial figure:

Cy Twombly, who died Tuesday, was loved and loathed in equal measure. Those who loathed him considered him a fraud, and were frequently heard to mutter – or shout: “My child could do that!” (from the Boston Globe.)

In a career that slyly subverted Abstract Expressionism, toyed briefly with Minimalism, seemed barely to acknowledge Pop art and anticipated some of the concerns of Conceptualism, Mr. Twombly was a divisive artist almost from the start. (from The New York Times.)

But I like this rebuttal, also from the obituary in the The New York Times (which has a stellar slideshow of Twombly’s work that you should probably check out, like, now):

In the only written statement Mr. Twombly ever made about his work, a short essay in an Italian art journal in 1957, he tried to make clear that his intentions were not subversive but elementally human. Each line he made, he said, was “the actual experience” of making the line, adding: “It does not illustrate. It is the sensation of its own realization.” Years later, he described this more plainly. “It’s more like I’m having an experience than making a picture,” he said.

*Not really about Cy Twombly, but still an amazing (and weird) story.