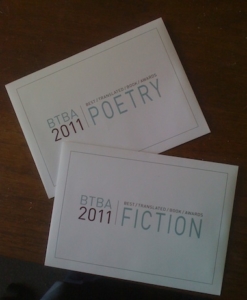 A little while ago, I was hanging out, wasting time enjoyably, and I came across the longlist for the Best Translated Book Award (Fiction and Poetry) at the website Three Percent, a really interesting (and really aesthetically pleasing–good job, guys) site all about international literature based at the University of Rochester. The list had been up for a while, so I thought I’d follow the thing about the BTBA and post here when they announced the shortlist, you know, for timing. Obviously I’m terrible at timing; the shortlists for fiction and poetry were announced in late March. Here they are:

The 2011 BTBA Fiction Finalists (in alphabetical order by author):

The Literary Conference by César Aira, translated from the Spanish by Katherine Silver (New Directions)

The Golden Age by Michal Ajvaz, translated from the Czech by Andrew Oakland (Dalkey Archive)

A Life on Paper by Georges-Olivier Châteaureynaud, translated from the French by Edward Gauvin (Small Beer)

The Jokers by Albert Cossery, translated from the French by Anna Moschovakis (New York Review Books)

Visitation by Jenny Erpenbeck, translated from the German by Susan Bernofsky (New Directions)

On Elegance While Sleeping by Emilio Lascano Tegui, translated from the Spanish by Idra Novey (Dalkey Archive)

Georg Letham: Physician and Murderer by Ernst Weiss, translated from the German by Joel Rotenberg (Archipelago)

The 2011 BTBA Poetry Finalists (in alphabetical order by author):

Geometries by Guillevic, translated from the French by Richard Sieburth (Ugly Duckling Presse)

Time of Sky & Castles in the Air by Ayane Kawata, translated from the Japanese by Sawako Nakayasu (Litmus Press)

Child of Nature by Luljeta Lleshanaku, translated from the Albanian by Henry Israeli and Shpresa Qatipi (New Directions)

The Book of Things by Aleš Šteger, translated from the Slovenian by Brian Henry (BOA Editions)

As it turns out, though, the winners will be announced tomorrow night, April 29th, at an award ceremony at the Bowery Poetry Club in the city called New York (that’s somewhere on the East Coast, I think).

Three Percent has some quick summaries of the books shortlisted, as well as longer reviews of all the books on the longlist, all of which sound great and not nearly as well known in the US as they should be.

In other interesting translation news, the shortlist for the International Foreign Fiction Prize, a UK prize for foreign fiction, was also announced recently.

And if you are curious to know why translation matters, check out Why Translation Matters by the legendary translator Edith Grossman, published last year by Yale University Press. A parting gem from Grossman’s book:

Where literature exists, translation exists. Joined at the hip, they are absolutely inseparable, and, in the long run, what happens to one happens to the other. Despite all the difficulties the two have faced, sometimes separately, usually together, they need and nurture each other, and their long-term relationship, often problematic but always illuminating, will surely continue for as long as they both shall live.