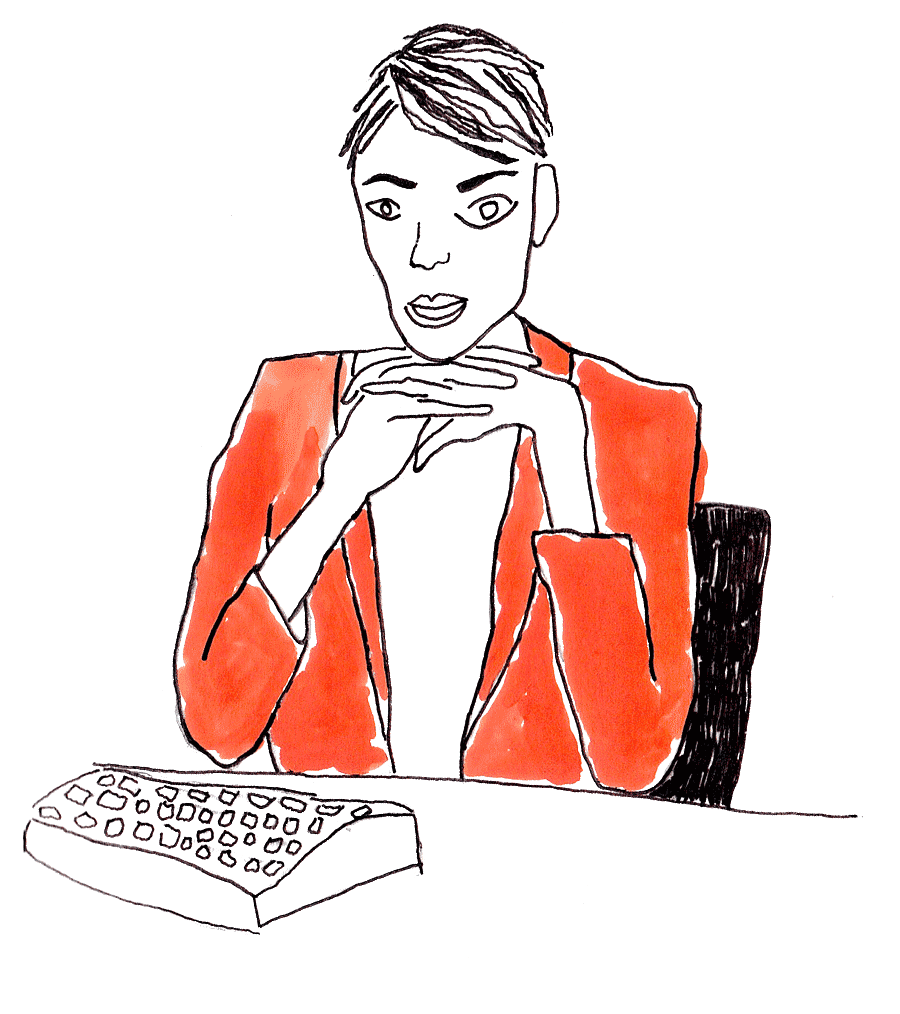 At the beginning of the year my boss implemented a new dress code. Corporate casual. First of all, I would like to say that the business is not a corporation. It is, in fact, an LLC and that C stands for company. LLC’s are generally the best option when there’s a sole owner of the company. And yes, he’s the sole owner. Which means that he gets to make all the rules. Even if they’re stupid.

No one was quite sure what corporate casual meant. We googled it. The gist of every article is that no one knows what corporate casual is. It seems to involve a lot of polo shirts and also, for women, a lot of creative darting and tailoring. By creative I mean it has basically no relation to the female body. Or, it has some kind of a relationship to some female’s body but whose is a mystery. Middle-aged Barbie with relaxed proportions.

Rule number one is NO JEANS. Well, black jeans are okay but blue jeans are not. If you wear blue jeans you are liable to look sloppy. Doesn’t matter if your jeans are $300 designer jeans that you are wearing with an expensive collared shirt, blazer, and oxfords. Blue jeans give people license to look sloppy and so they are not allowed. They also stain the off-white Eames office chair knockoffs from Crate & Barrel with an indigo butt. Of course, my boss wears blue jeans in the office all the time. But also of course, he’s the boss so he can do whatever he wants. Actually, those jeans might be more of a washed teal. Which seems more offensive.

Rule number two is UPTOWN. It’s an interior design firm whose clients are all billionaires who live on the Upper East Side. The office used to be in SoHo but now it’s in Midtown and now that we are in Midtown we are no longer allowed to dress downtown. The guidelines we were given were “the shops on Fifth and Madison Avenues.” He means in the 60s but there’s an Urban Outfitters on 43rd and 5th and even though I’m not 17 I’m tempted to follow the letter and ignore the spirit and shop exclusively at Urban Outfitters from this day forward.

Rule number three is “no shorts unless they are from Bergdorfs.”

Rule number four is men must tuck their collared shirts in (they are only allowed to wear collared shirts). And shine your shoes because a man with scuffed shoes is pathetic.

I’m not a man, but I do wear collared shirts most of the time. I never tuck them in. I spent most of the winter trying to get away with slipping under the dress code as much as I could. I wore a collared shirt, but it was plaid flannel, and I wore it with black jeans (but expensive designer black jeans, so). Rule number three seems sexist. Why can’t men wear shorts if women can wear skirts? Women can’t wear shorts either but men can definitely not wear skirts. I’m going to assume that capris are out of the question for any gender just for the sake of cultural decency.

The thing about a dress code is looking presentable. Ultimately, presenting. A man looks like a man and a woman looks like a woman. Any other gender is not possible in corporate casual. Gay men (and this is interior design so there are plenty of gay men, the boss included) must look like men. You can be a queen, but tuck that shirt in and wear a suit if possible. Lesbians can look like either men or women, but please, choose one. Gender fluidity is a downtown construct and our clients have no tolerance for queerness. Why would they? Their 20,000-square-foot houses are designed down to the the toilet roll holders. Everything is expensive and everything is in its right place. Wicker for the Natatorium chaise lounges and chintz for the Guest Bedroom Sitting Room club chairs and don’t you dare think about mink pillows in the Breakfast Nook, those are for His Study (He being the master of the house). Even the servants’ quarters are completely designed (though it’s just Crate & Barrel for them).

As my boss said in our last staff meeting, “We are selling people an aspirational lifestyle.” Presenting is not the same as being. It’s showing people what you’d like them to see. Presenting is aspirational, even if those aspirations aren’t your own but the ones you’re paid to present.

Corporate casual evolved in the early 90s, when Silicon Valley nerds got rich and realized they had enough money to go into work and dress how they wanted. Because they owned work. The rest of the Gen X slackers entering the workforce didn’t own work, but slowly they started to work their way towards middle management. And corporate America started to change in their image. 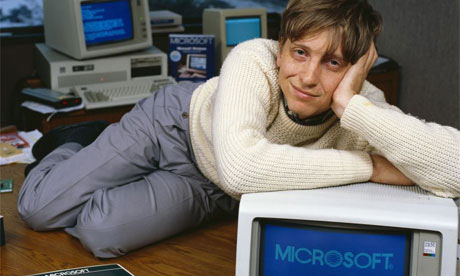 Most days the women and men who flow through the hallways of corporate New York look as if they are on the way to a rich man’s funeral. Some call it the Wall Street look, or the Madison Avenue look, but what it really is, said people who suffer inside those proper clothes, is the stiff, hot look.

Wearing a three-piece suit to work in New York in August (unless you get a ride to work in a Town Car) is essentially a definition of sado-masochism. Generally, so is working in corporate America. 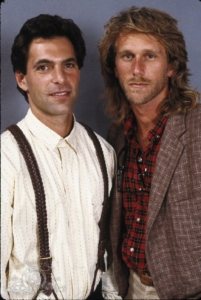 Two years later Louise Chunn wrote about the difficulties Britons were having adopting corporate casual, or as they occasionally called it, “Work at Ease.” Apparently when British men dressed down on Fridays they looked set to go on a fox hunt. Chunn’s sartorial cue for too buttoned up was Michael from thirtysomething. Here is Michael, the dweeb on the left in braided leather suspenders. Try to imagine how this was an improvement on British dress. Sadly, Gary, the babe with the mullet in plaid doesn’t pass muster. Unsurprisingly, Gary is an English professor at a liberal arts college.

Google “corporate casual” and 80% of the results will be “what is corporate casual?” Business attire is obvious, at least for men. WikiHow suggests, “No skinny trousers, even for Europeans.” One general rule of thumb seems to be “show as little of your body as possible.” The idea of a body in the workplace appears to make most people uncomfortable. Not only employers and clients, but employees, too. Advice for women almost without fail includes an admonition against the display of sexuality.

Hannah Black’s “My Bodies” was made with close crops of Google image search results for “CEO,” inevitably mostly old white men, overlaid with black female r’n’b artists singing about their bodies. Disembodied voices of that class of people (black women) whose bodies have historically been the most exploited over images of those whose bodies are practically irrelevant (wealthy white men).

The corporate office needs to hide the human bodies that actually incorporate it. It’s no secret that powerful white men need no incentive to display their sexuality since historically they have not needed to exploit their bodies or sexuality, or have it exploited by others. Corporations do, however, rely on the fiction of their own bodies.

Corporate personhood is a legal fiction enshrined by the Supreme Court through a number of decisions but most explicitly in Santa Clara County v. Southern Pacific Railroad in 1886, which extended the Equal Protection Clause of the 14th Amendment to corporations. An amendment passed in order to protect the civil rights of those whose bodies had previously been considered property has since been used effectively to control the bodies of employees as corporations see fit. The latest Supreme Court decision, Sibelius v. Hobby Lobby, allows corporations to regulate the bodies of women by denying them health care coverage not denied men. 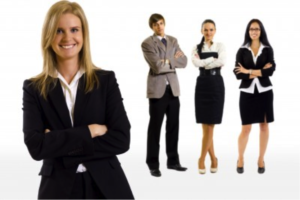 Corporate casual evolved out of a desire to be comfortable at the workplace, to shed the “stiff, hot look,” and to carve a sense of individual identity out of the mass of gray suits. It also evolved out of necessity, as more and more women — and these days, whatever gender — entered the corporate workforce. In effect, it provides a veneer of humanization. Corporations allow their employees to feel a little more comfortable in their bodies, to a degree, within gendered socially acceptable mores.

Corporate casual has also convinced women of the insidious idea that flaring the collar of their darted white shirt over their blazer is a good look. Never a good look.

I was laid off a couple weeks ago. Via voicemail, with no notice, given the vague reason of “restructuring.” Which is fine. Because it means that my body is free to wear whatever it wants (and in the summer that generally means as little as possible). At least until Sallie Mae (aka SLM Corporation) catches up with me.