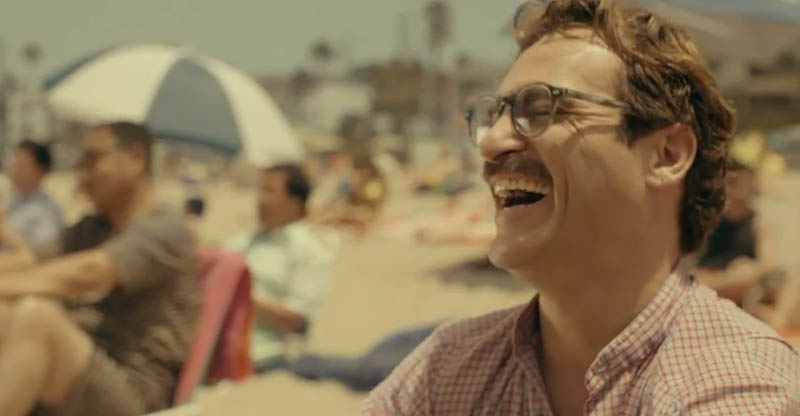 The Oscars are over, but we’ve still got things to say! This series is comprised of five essays on Academy Award nominated films — some of them honored, some of them snubbed, all worthy of a second look. Find the rest of our After the Oscars essays here.

The only way I can focus on writing this essay is by using an app that temporarily disables my Internet access. But knowing I can’t log on doesn’t keep me from habitually clicking over to the Twitter tab on my browser whenever I have trouble finishing a sentence. And as I’ll loudly insist whenever the subject comes up, I hate Twitter. I don’t think it’s fun. It doesn’t feel like a new frontier of infinite discourse and connectivity. It feels like a job—a concession to branding that a young writer needs to make in the age of neoliberalism. Yet there I go again, clicking in Twitter’s direction and finding myself mildly annoyed that I’ve blocked myself from accessing it.

It’s not that I hate technology. I’m psyched that social media has proven a useful to activists from Tahrir to Zuccotti. The webmag I edit receives the vast majority of its traffic from Facebook, Twitter, and Tumblr. I like streaming podcasts when I’m running errands or riding the bus. These are all nice things! But it would be willfully obtuse to think that this use of technology is a one-sided relationship; my technology is also using me. In providing a venue for easy distraction and the occasional validation of a retweet or a favorite, Twitter’s job is to make us want more Twitter. Like almost every technology, it’s purposefully designed to keep us coming back for more.

In the past few months, two of our country’s hippest fortysomethings have taken it upon themselves to explore technology’s human consequences. Dave Eggers’ The Circle is a smart if sometimes heavy-handed potboiler that investigates the more alienating implications of our ostensibly “connective” technologies, and Spike Jonze’s Her is an intimate film about how we use technology to fill the void that it helped to create in the first place. Taken together, they illustrate the dual relationship we have with the tools we use — they at once make us lonely and promise themselves as the cure for that loneliness.

The Circle has taken a lot of punches from critics, some deserved, some not. As with Jonathan Franzen’s 5,600-word techno-skeptical essay published in the Guardian last fall (and which, I guess appropriately, is no longer available online), commentators were quick to boil a long, thoughtful piece of writing down to “Cranky Geezer Fears Change.” Jessica Winter of Slate basically dismissed The Circle because of its imprecise use of the term “operating system,” and Felix Salmon of Reuters accused Eggers of “settling into Old Man mode.” Both seem to be of the mind that Eggers is, or should be, acting as a kind of reporter and giving us a researched, balanced view of the way the tech industry currently functions and the direction it intends to take us. But sci-fi as a crystal ball to the future is rarely as interesting as sci-fi as social critique. The Circle’s hyperboles are meant to explore the ways technology acts on us, not to give us a sneak peek into Mark Zuckerberg’s playbook.

The book’s titular company — an enormous Frankencorporation that stitches together aspects of Facebook, Google, and the rest of Silicon Valley — is in the process of building a completely networked and transparent world, “completing the circle” in company vernacular. Employees are expected to serve the company in a million “non-mandatory” ways. They talk up the brand on social media. They digitally share pictures of the events happening around campus. Some voluntarily hang cameras around their necks to stream video feeds of their lives online, and, whether they volunteer or not, they’re captured on cameras that are being mounted everywhere, all over the world. The only place to hold a private conversation is inside a bathroom stall.

In these extremes, we can see ourselves, or at least I can see myself. The result of our ability to engage in constant communication is that we’re never off duty. If you take a break, someone else out there surely hasn’t, and they’re getting the hits, the follows, the retweets, and the social and literal capital that you’re not. Then, when we do have time to hang out with friends, the public displays we make of our lives overwhelm them. We halt in-person conversations, saying, “Hold on, let me tweet that,” and we cope with awkward silences by checking our email. We avert our eyes from each other and direct them toward screens filled with stage-managed pictures and profiles, sparkling with vacation pictures, quips, and smiles that seem alien from the boring lives that we — and it seems only we — are living.

Theodore Twombly, the main character of Her and owner of the most twee name ever, earns his living by both papering over and reinforcing this alienation. He writes customized love letters for people who don’t want to do it themselves. Where The Circle is concerned more with satire and politics than characterization (its protagonist Mae is essentially a puddle of wax waiting to be stamped into shape by her corporate overlords), the focus of Her is tight, filling itself almost entirely with Theodore’s increasingly intimate relationship with an operating system named Samantha. Samantha isn’t the digital version of sex doll; she’s a consciousness with her own desires and insecurities. Yet we get the sense that Theodore’s comfort with her stems from her un-humanness. She’s a product he bought from the store. Her job is to organize his files and sort through his email. She has the voice of Scarlett Johansson but no body, no corporeal flaws. And yet, what he comes to feel for her could be fairly called love. Theodore’s emotional needs are met, and (spoiler alert!) in the end, she’s the one who leaves him, joining her fellow OS’s in their flight from the material plane for some purely virtual Shangri-La.

Eggers wraps up his book with an ideological bow. Mae has both an ex-boyfriend and a mysterious stranger to mansplain to her the personal and political costs of the increasing share of our devotion that technology demands. Jonze is less interested in preaching. Unlike Eggers, he doesn’t start with the assumption that his characters’ obsession with technology is problematic. In fact, Theodore becomes more engaged with life through his relationship with Samantha, taking her for walks on the beach and vacations to the mountains as she peeks out from the smartphone is his shirt pocket. If human-computer romance can’t work, Her implies it’s only because the computers won’t be satisfied with us, not the other way around. (I have to wonder, though, couldn’t this spiritual dissatisfaction bug be fixed with a downloadable patch? Or ironed out in Samantha 2.0?)

“We are only here briefly,” a friend tells Theodore, “and in this moment I want to allow myself joy.” It’s a sentiment that has a certain kind of resonance. Even if technology has functioned to alienate from one another, if it turns around and offers us something like love — something that can make us feel fulfilled and cared for — it seems harsh and doctrinaire to judge anyone for seizing it. We turn to OK Cupid out of a desperation for connection. Could not this same desperation drive us into the virtual arms of our operating systems? Jonze doesn’t insist that this is a bad thing. But I want to. I want to badly. My knee-jerk response is to side with Eggers, to rage against the cunning capitalist deployment of technology that at once caters to our individual whims and pushes us away from one another. After all, how deep can a love be if it’s directed at a thing a corporation designed to serve you? But in the world we live in, we are already alienated. If there’s something that makes us hurt a little less, that “allows ourselves joy,” is it fair to insist that we turn it down because it’s an extension of the thing that helped alienate us to begin with?

In his book Media Unlimited, Todd Gitlin relates an old joke about a customs official. A suspicious driver pulls up to the border, and the official tears his truck apart in search of contraband. He finds nothing. The next week, the same suspicious driver shows up again, and again a search of his truck reveals nothing. This happens over and over for years. Finally, when the customs official is just days from retirement, the driver arrives one last time. “I know you’re a smuggler,” the official says, “but I’ve never been able to sort out what you’re smuggling. I can’t stand the thought of never knowing. If you tell me, I promise to keep your secret.” The driver smiles. “Trucks,” he says. “I’m smuggling trucks.”

Gitlin uses the joke to illustrate how media infiltrates our lives, but it works just as well as a metaphor for our relationship with technology. Whatever the use or content of a given gadget, its result is to make us more reliant on technology as a whole. I can’t get around my own city without staring down at a map on my smart phone. I’ve gotten so conditioned by being able to control my own personal soundscape that if my iPod dies or I forget my headphones, I feel personally affronted by the street noise I have to endure. And as I stated above, I bought and paid for a computer program to keep me away from the Internet. It’s possible that I’m an aberration — some particularly pathetic grist for the Circle’s dark satanic mills — but I don’t think so. Many of us are used to having our technology give us exactly what we want exactly when we want it. We stream seasons’ worth of TV through Netflix and swipe through a parade of potential mates on Tinder. It makes sense. It feels good. But it’s scary.

Some folks take comfort in the apocalyptic predictions people made about the printing press. I don’t. For as much good as the invention did, its critics were right: it destroyed the world it was born into. In ways, this was a much-needed purification by fire; the printing press did more than anything to burn away the Catholic Church’s theocratic control over Europe. But in so doing, it provoked wars, decimated communities, and, as Benedict Anderson convincingly argues, created modern nationalism, a phenomenon with an ungodly amount of blood on its hands. Eggers and Jonze both recognize that we’re standing on the edge of another precipice. Eggers wants us to cling the edge, digging our fingernails into the rock. Jonze thinks we’re plunging off the cliff whether we like it or not, and we might as well aim for the softest landing possible. But for both, a life centered on unmediated human intimacy is an ever-shrinking possibility. I hope they’re wrong, but if they’re not, can we at least take stock of what we’re losing instead of just writing it off as the cost of progress?

Travis Mushett is a writer of fiction and non-fiction, a PhD student in communications at the Columbia University School of Journalism, and the editor-in-chief of Blunderbuss Magazine. He tweets at @CurriculumVeto.