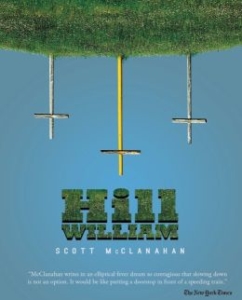 Scott McClanahan’s new novel Hill William doesn’t mince words as we’re introduced to our protagonist, Scott, and the personal conflict that will proceed to drive the entire plot in the very first sentence: “I used to hit myself in the face.”

It’s a jarring way to meet Scott, and immediately compelling — after all, there’s that “used to” that McClanahan sneaks in there, letting us know that this particular brand of masochism has some sort of resolution by the end of the story. But while Hill William is bookended by Scott’s adult experiences in the present, the bulk of the book consists of vignettes from his time spent growing up in West Virginia, related in a childlike voice that is part awestruck, part terrified, and fully aware. As such, even if you can’t relate to the specific events and people in Scott’s world, the tenor of his narrative voice can’t help but feel familiar — it’s the same way you processed perceptions and feelings as a kid. Examples of these uninterrupted streams of emotions abound throughout the book, such as this recollection of an attempt to cheer his ailing mother up:

I walked back home and I cried even more. By the time I got all the way back home to my mom you couldn’t even understand what I was trying to say. It was one of those cries where all of the words start blending together and all you can hear is some crazy crying sentence. It was,

“Iwasgoingtopickblackberriessniffforyoubutthenfelldownsniffandtheywentallover.” I wanted to tell her I hoped to make her feel better.

Scott wrestles with these memories throughout Hill William, recalling them over and over again, inhabiting them, staring each one full in the face (and throwing those occasional jabs at his own face when he feels he has no other recourse, trading mental anguish for physical pain). One of the central characters during Scott’s adolescent years is his neighbor, Derrick. Scott starts out revering him, as Derrick has an unfathomable fifteen years to Scott’s nine and still lets Scott hang out with him. Derrick has a gay step-brother, Walter, who is subjected to endless verbal and physical abuse from the community around them. Derrick has no one to turn to for help processing his own budding sexuality, and having witnessed Walter’s vicissitudes is understandably terrified. His friendship with Scott quickly reveals itself to be one of the only ways for Derrick to exert influence over the world around him, and he takes advantage of the younger boy’s naivete almost immediately:

I sat and watched him as he flipped through the magazine pages and looked at the pictures of the parts. He stopped and ended up putting the magazine across the bed flat like a bible and said, “Do you want me to show you how he does it?”

I told him “No,” because I thought that it looked like it hurt.

But he just smiled a chewing tobacco smile and said, “Nah. I promise. I won’t hurt you. I just want to show you how.”

This isn’t the only time that this happens in the book, and Scott isn’t the only one who Derrick abuses — in fact, one of these occasions involves Derrick’s own sister and buries itself so deep in Scott’s psyche that he’s only able to face it when he finally starts seeing a psychologist as an adult. These are monstrous acts, but to my surprise, I didn’t find myself despising Derrick after finishing the book, which speaks volumes to McClanahan’s empathetic abilities. Rather than strictly vilifying Derrick, McClanahan describes him through Scott’s adolescent eyes, eyes that don’t have those knee-jerk, gut-wrenching adult reactions at the ready. Scott is, in many ways, just as confused as Derrick, and he recognizes their kindred confusion — something no one else around them is willing to. So while these repressed memories cause him many different varieties of pain later in life, he never attempts to seek revenge on the older boy. Far from it — when Scott returns to his childhood neighborhood as an adult towards the end of the book, he feels compelled to check in on Derrick, walking down to the house that his family still lives in after all those years:

I didn’t say anything and listened to him and then I finally asked, “Well, where’s Derrick?”

He shook his head and grinned his gummy grin. “Don’t know.”

Then he was quiet.

He said, “He just took off too. Nobody knows where he’s at. I heard he was working up north.”

While it’s a breath of fresh air to find such nuanced characters in a West Virginia that has fallen prey to redneck stereotypes for far too long, McClanahan’s poetic register lingered with me longer than any other facet of the book when I finished reading. Whereas in his previous book, Crapalachia, he directly addressed the reader regularly throughout the story, in Hill William his protagonist picks his spots and lends these entreaties that much more power. The closing sentences of the novel are a mantra, a blessing of sorts:

So say these words like a spell and it shall be true.

And even though I’m far away by now, I have a new name too.

My new name is you, and I am whispering something to you.

And it’s true — we’ve inhabited Scott’s innermost mind and deepest memories for the entire course of the novel (novels being the only medium that allows for such magic) and so are, in a very real sense, him. So when Scott says “I love you” in big bold letters to close the book, he’s simultaneously saying it to himself and to us. It’s a joyful proclamation, and a welcomely hopeful note for Scott to go out on after surviving round after round of his fraught memories for so long.

The compulsive face-punching that Scott inflicts upon himself and describes so deliberately in the very first pages of the novel is initially simply unsettling. But by the end of the book, when viewed through the lens of Scott’s memory, it can be read for what it is — not merely a pitiful masochistic impulse, but an attempt to physically break the memories out from the lockbox in his head, pain be damned. McClanahan is performing the same feat authorially throughout Hill William, and whether he’s exorcising past demons or reveling in unforgettable joys, his words have all the power of haymakers and the surprise of suckerpunches.