Under This Terrible Sun – Carlos Busqued 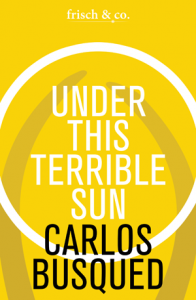 The set up must always appear simple. That’s how noir works. What you first took to be the simplicity of characters and plot has to slowly reveal itself to be, not just hard-boiled and tough for its own sake, but a way of expressing mysteriously profound moral ambiguities. In other words, the detective isn’t terse because he has all the answers — he’s terse because he’s in over his head and he knows it. Under This Terrible Sun, the debut novel of the Argentine writer Carlos Busqued, is a noir thriller. As such, the set up appears simple: Cetarti, a young Argentinian stoner, is given word that both his mother and brother have been murdered by his mom’s lover — who then killed himself. Cetarti is asked by a man named Duarte, the executor of the deceased murderer, to journey to a small country town in order to tie up the financial and legal loose ends. Cetarti seems unphased by all of this.

As befits a good noir novel, the imbibing of substances makes it possible for the narrator to distance himself from the violence of the plot. Traditionally that substance has been alcohol, but Cetarti, along with a number of other characters, prefer to smoke their crutch rather than drink it. Stoner Noir is almost a subsubgenre — occupying a space somewhere in the “crime fiction” galaxy, and hot boxing a cop car under an overpass somewhere in the seedy side of the city of “Noir”. Regardless, people have been exposed to it. Think of Thomas Pynchon’s Inherent Vice, or, more in the pop culture vein, the movie The Big Lebowski or the HBO show Bored To Death.

Maybe we should come to expect more noir in translation to have a stoner bent. Stoner culture is an international culture, after all. The symbols and rituals of getting high, the bongs and papers and clips and pipes, are similar enough from country to country to create a sort of Universal Catholic Church of marijuana — the local dioceses might cater a bit to native proclivities, but the basic tenets hold and everyone is roughly on the same page. That alone of course wouldn’t be enough of a reason to choose weed over whisky when publishing noir for an international audience, but there’s another reason weed makes more sense than alcohol as the drug of choice in noir: stoner culture and noir, when both are at their best, are experiments in mood and atmospherics — they insinuate that you’ve stumbled into a secret world running parallel to ours. A shadow world. Alcohol isn’t about noticing things, about making strange connections — it’s about lowering inhibitions. In this sense, marijuana is a substance more in tune with mystery.

And so Cetarti goes to the tiny town of Lapachito in order to take care of his family’s business. As strange and morbid as that business is, there’s an interesting paradox to it all: the murder/suicide seems in the same instant both more grizzly than the facts of the crime, pouring over the borders of its own localized tragedy to hint at something almost cosmic, while also being subsumed in the atmosphere of general decay that haunts the text. The pretense, of course, is that because the crime is described so matter of factly, so simply, that its meaning must be manifestly obvious and self-contained. But what actually happens, how the story actually works, is that something essential about the crime projects itself in ghostly emanations to radiate a paranoid meaning. The three bodies remind us of our own deaths. The weird familial intimacy of the crime reminds us of the deaths of everyone we know. The simple finality of the action seems somehow connected to all violence ever committed, of the mass extinction of mankind, and possibly even of the final and ultimate end of what we understand to be physical reality. Only a Stoner Noir novel could so deftly create such a paranoid sense of doom — and like stoners, we project hidden meanings in the silences of the text.

So one half of this Stoner Noir paradox is that the deaths hint at significance beyond their literal meaning. But the other half is that they’re not necessarily the mystery to be solved. The mystery isn’t the murder, the suicide, or even the enigmatic evil that seems to motivate many of the characters — rather the mystery is one of qualitative abundance: in this place, where everything seems suffused with meaning, what actually matters? What’s actually important? In a place where things radiate cryptic messages, calling to you in spectral whispers, how do you focus on a single thread of meaning without being subsumed by the entire fabric? A few examples in the text of exhaustive lists of things that may or may not be significant:

In the bathroom, next to the bidet and up against the wall, hundreds of copies of Reader’s Digest, very old but in good condition, were piled up. He flipped through one from 1962: the dangers of communism in Southeast Asia, the drama of a man trying to make it out of a forest after accidentally severing his aorta with a chainsaw, the eternal enchantment of Naples.

The characters in this book like getting high and watching nature documentaries. Understandable. That’s classic stoner fare, for sure. But these folks appear to sense the same qualities in the exotic animals on their televisions as in the oddly harsh environment and people around them, a profound sense of otherness that both repulses and fascinates them. Meanwhile, the plot of the novel progresses, of course, to complications beyond just the death of family members. Like all good noir, there are crimes within crimes here. But what really makes the novel work, and what makes it worthy of our attention, is this central question of figuring out what is meaningful to us in such an amoral and capricious world. Weather, cars, fish, toy planes, elephants, pornography, weed, coffins, beetles, dreams, crosses — all threaten to weigh in with equally heavy importance, projecting a repetitive monotony of doom — a weird mandala of despair slowly rotating on the page.