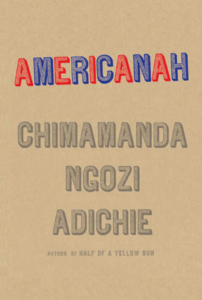 These are questions Nigerian fiction writer Chimamanda Ngozi Adichie indirectly asks with her most recent novel, Americanah. In working to locate the intimate, painful, and tender relations of her protagonists, Ifemelu and her high school sweetheart Obinze, within the interlocking contexts of racism, patriarchy, xenophobia, and transnational capitalism, Adichie attempts a revolutionary act of writing. To wit, she puts human faces on some of the most urgent problems in our modern world.

The nearly-500 page story follows Ifemelu and Obinze’s relationship, switching between each character’s point of view across decades, continents, and an ocean. Like staring into a dodecahedral prism, we see their love as a dizzying set of angles and light that reflects clandestine immigrant communities, the culture of higher education, rich and poor Nigeria, rich and poor America, rich and poor London, and more. And it’s all told in prose written with the kind of grace usually only found in gently falling snow or perhaps the easy water of a narrow, slow creek.

What’s so powerful about Americanah, however, is the way Adichie thinks through how human faces, flesh, and blood should be honestly portrayed in discussions and representations of the grand and minute violence of everyday life.

One of the major devices Adichie uses to speak such individual, material experience is Ifemelu’s wildly popular blog about race: Raceteenth or Various Observations about American Blacks (Those Formerly Known as Negroes) by a Non-American Black. Many years after her emigration to Philadelphia for university, Ifemelu begins writing the blog to cope with and share her experiences as a non-American black in America. Raceteenth becomes enormously successful, leading to anonymous donations and lecture fees that financially support her and, ultimately, a Princeton fellowship in the humanities.

For Ifemelu the blog is a dynamic tool for communication with nonwhite communities: a means to widen online natural hair communities of black women, propose various reasons for loving Obama (during the 2008 election), and candidly share frustrations about (non-)American black life. It allows Ifemelu to reveal to the readers of her blog — and, through her, Adichie to readers of the novel — the human condition of imperial violence and refugee diaspora that persists into the quotidian. In a particularly aphoristic post, she explains that “sometimes [Americans] say ‘culture’ when they mean race. They say a film is ‘mainstream’ when they mean ‘white folks like it or made it.’ . . . ‘Racially charged’ means we are uncomfortable saying ‘racist.’”

Adichie rightly places Raceteenth within its context, identifying the stakes of such a blog — and, by extension, such a book. She documents the way such writing is commonly received; observations, though welcomed when Ifemelu writes them, are not received equally well by the novel’s other characters. This, she shows, is a common experience of black women writers. A fellow writer, Shan, an African American woman, in drunken frustration tells of her editor’s response to a story about her mother’s blackness preventing her from successfully rising in the ranks of her career:

I put it in the book and my editor wants to change it because he says it’s not subtle. Like life is always fucking subtle. . . . somehow my mom’s experience is suddenly unnuanced. ‘Nuance’ means keep people comfortable so everyone is free to think of themselves as individuals and everyone got where they are because of their achievement.

The requirement of “nuance” in storytelling can function as a method of active non-engagement. To identify as unsophisticated or unsatisfying a story that posits racism as the defining feature of an experience is a choice to ignore racism.

In Americanah, Adichie suggests that this demand for nuance (not nuance itself) is a way in which to skirt the need to engage race and racism as a central aspect of our lives and that it places limits on writers of color. She observes that an African American writer like Shan is only marginally allowed to write such observations, and, more often, such a marginalized writer’s only platform to speak about blunt racism is when she is embarrassingly drunk — that is, acting inappropriately — at a party.

Adichie, however, is no stranger to nuance, to painful subtlety, as a necessity to ask particular questions. Desperate for money when she first moves to Philadelphia, applying for job after job with no success, Ifemelu regretfully answers an advertisement for a weekly gig helping a businessman “relax” after long hours at the office. Of Ifemelu’s first and only day at the job, Adichie writes:

She did not want to be here, did not want his active finger between her legs, did not want his sigh-moans in her ear, and yet she felt her body rousing to a sickening wetness. Afterwards, she lay still, coiled and deadened. He had not forced her. She had come here on her own. She had lain on his bed, and when he placed her hand between his legs, she had curled and moved her fingers.

In telling Ifemelu’s painful experience, Adichie thoroughly troubles consent, and even desire. Adichie prevents a simple reading of Ifemelu’s “choice” being driven exclusively by her need for money by noting Ifemelu’s “sickening wetness.” A blunt reading of consent, let alone desire, where she simply “does it for the money” and is ultimately abused by a system that leaves her few options is eschewed for a confusing moment of sexual desire where the most clarity we see can only be the shadows of bodies illuminated by the faint fire of capital.

Neither subtlety nor complexity disappear from Adichie’s prose. Instead they are tools employed strategically to ask specific questions. While this scene searches out the complexity and contradictions of sexual desire, we would be remiss to ignore Adichie’s insistence that the demand for nuance, for “what else is going on,” is a strategic act of non-engagement. Racism, or any experience of oppression, is not without subtlety or nuance, but to insist that it is an insufficient foundation to a story or experience is most certainly a mistake.

Many years after Ifemelu’s first paid job in America, a fellow non-American black, a Senegalese professor, tells Ifemelu that she must apply for a humanities fellowship at Princeton, despite not being an academic. He straightforwardly states, “We need to get into these places, you know. It is the only way to change the conversation.” Adichie’s charge to change the conversation is a call for frankness in representing people. While it may seem simplistic method of storytelling, we will be changing the conversation on the experience of racism, clandestine immigrant life, and sexual assault if we take the time to listen and fully understand material human experiences before skeptically asking for more nuance or greater subtlety.

Following Adichie’s incredible earlier works, her novels Purple Hibiscus and Half a Yellow Sun and her collection of short fiction The Thing Around Your Neck, Americanah is a masterwork of graceful prose and political narratology. While the novel is neither a manifesto nor a morality play, Americanah takes the important, brave risk of building a full, human story where the blunt and hurtful realities of race-based oppression are frank parts of the endlessly complex relations of our world. What remains unclear about Americanah is whether we, Adichie’s readers, will do our part and listen.