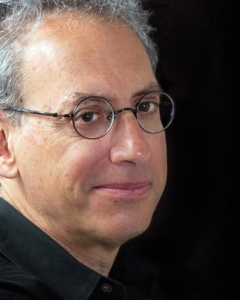 “Everything worth seeing lies at the edge of visibility,” Ken Kalfus writes in Equilateral, and you may have to squint against the desert sun to determine exactly what’s happening in his story of a British astronomer attempting to contact Mars from Egypt’s Great Sand Sea. Like all of Kalfus’ novels, in Equilateral, published in April, one enters murky Pynchonian territory where history is accentuated by pure fantasy.

The 207-page novel tells of Sanford Thayer, who, inspired by the real-life astronomer Giovanni Schiaparelli’s theories of intelligent life on Mars, is building a giant equilateral triangle in the desert as a beacon from Earth to Mars. Each side of the triangle will be 306 miles and 1,663 yards in length, which is 1/73 the circumference of the Earth at the latitude of the Equilateral; a seventy-third, Thayer explains, to show Mars that Earth is aware of prime numbers. Thayer ends up running roughshod over the Egyptian culture hosting his project, including the 900,000 fellahin (peasants) hired to dig the triangle so it can be filled with petrol and set ablaze when Earth’s orbit draws closest to Mars on June 17, 1894. Thayer’s Fitzcarraldo-esque story is filled with mathematical discussions that will send you scribbling out your own diagrams and calculations in notebooks just to keep up, and ends in a narrative triple back-flip that demands a re-read to catch all the details you missed the first time along.

Kalfus, a resident of Philadelphia who previously lived in Paris, Belgrade, Dublin, and Moscow, has worked in the past as a freelance science writer, journalist, and cab driver. He has published two other novels, A Disorder Peculiar to the Country (a 2006 National Book Award finalist), and The Commissariat of Enlightenment; as well as the collections of short fiction Three Stories, Pu-239 and Other Russian Fantasies, and Thirst. We spoke via email.

What came first with Equilateral — the idea to write a novel set in Western Egypt in 1894, or the calculations by which you determined that that would be the best time and place for someone on Earth to light a beacon to Mars?

The novel began with the idea of a 19th century attempt to contact extraterrestrial intelligence through massive geometric excavations; the general time and place flowed from that idea, according to the contours of my themes.

The actual date of the Flare, June 17, 1894, was precisely chosen, however, according to the calculable position of Earth in the Martian sky: the planet was at maximum elongation on that day, its furthest distance from the sun as seen from Mars, when its surface would conceivably have been most visible to Martian astronomers. I used the software program Starry Night to plot the motions of all the planets and stars observed in the course of the novel. As fantastical as my story may be, I’ve put the celestial furniture in all the correct places.

Some reviewers have compared Equilateral to works of classic adventure and science fiction by writers like H. Ryder Haggard, H.G. Wells, and Edgar Rice Burroughs. Were any of these authors inspiring to you during the writing of Equilateral?

I read Wells and Burroughs when I was a kid, and they shaped my first appreciation of Victorian attitudes toward science and other peoples; Equilateral is certainly rooted in their fictional worlds. I came to Haggard’s King Solomon’s Mines just as I was beginning my novel. It’s very entertaining, and you just have to accept the casual racism and imperialism as elements to the story, as I hope you will accept them in Equilateral.

The first chapter of Wells’ The War of the Worlds is some of the finest writing the 19th century produced. I went back to it fairly recently, while my novel was well underway. It too is motivated by the themes of colonialism and racial conquest.

When you were working on your earliest stories in Thirst, did you ever think you would eventually be traveling to Egypt and writing this type of science fiction/historical fiction blend?

In fact, my first notes for Equilateral go back to the mid-1980s, the same time that I began writing the short stories that would make up Thirst. I thought then I had a pretty good idea what the novel would be like, but I had no idea how to write one. Over the years and over the decades, as the search for alien life intensified at the same time as the West’s relations with its formerly colonized lands deteriorated, my fascination with the themes of the novel deepened, as did my ability to write something novel-lengthed.

I don’t think I specifically envisioned traveling to Egypt for the book, but at the time I was mad to travel everywhere I could. I still feel that way, and hope to return to Egypt again.

One of my favorite moments in Equilateral is your description of “the Equilateral’s songs,” the altered versions of “indigenous airs” now sung by the fellahin as they work on Thayer’s project:

“They give full-throated gratitude to the God who has decreed that the square of the hypotenuse is always equal to the sum of the squares of the sides, making possible the whole of trigonometry and then, lying beneath trigonometry, or around it and above it, the fundamental structure of reality.”

What interests you about the connections between theism and mathematical formulae?

One of the premises of the novel is that mathematics is a universal, eternal, omnipotent set of laws that defines the fundamental structure of reality. That’s of course the same purpose as any religious project. From Thayer’s point of view, I think, mathematics is a method of thinking about the universe that his Arab excavators will eventually embrace, in their own primitively “indigenous,” religiously influenced way.

In The Commissariat of Enlightenment, you write:

“The cinema had seized the human imagination. Now we saw ourselves as if filmed, flat and inaudible, inhabitants of flickering, rectangular space, and novelists began composing their literary scenes as if the protagonists were viewed through camera lenses, engaging in brief episodes separated by blackouts.”

Do you believe that the cinematic arts have altered the way people perceive and writers imagine? Does film affect your labors to convey a story through prose?

I stand by that observation made in Commissariat, and the work of the early modernist writers at the beginning of the last century strongly confirms it. I believe technology is continually changing how we perceive the world and how we tell the stories that make sense of our lives, whether we’re novelists or not. In A Disorder Peculiar to the Country, my characters are trying to work through their personal problems while their consciousnesses are shaped by the rhythms of the 24/7 television news cycle. I would expect that the ubiquity of social media will eventually transform the narrative structure of our personal lives and our fictions.

Although I’m not a big filmgoer, I presume my own prose style is cinematically inflected — otherwise my books would be more difficult for contemporary readers — though of course I also draw my style from my reading and my own particular kind of thinking.

Each of your three novels has its own set of philosophical questions and concerns which are woven around specific historical moments: the Russian Revolution in The Commissariat of Enlightenment, America after September 11th in A Disorder Peculiar to the Country, and now in Equilateral, the late 19th-century British Empire, still desperate to expand. Do personal, philosophical cues or some other kind of pre-existing inquiry inform your choices as to which historical moments you use as material?

My mind is often occupied with a variety of philosophical questions and concerns and mysteries and manias and conceits. Stories help make me think through them — that’s why I write — and history often provides me with the outline of a story that I can remake for my own needs. In Commissariat, I was compelled by the 20th century’s rising hegemony of image-based propaganda. In Disorder, my concerns related to the power that public events reigned over our private imaginations.

I don’t consider myself a historical novelist, however: I play too fast and loose with the actual history.

In A Disorder Peculiar to the Country’s final chapter, where several Bush-era patriotic fantasies are realized, along with Osama bin Laden being captured alive and the Iraq War ending in a quick U.S. victory, you specifically singled out Syria as the site of a bloodless revolution, with president Bashar al-Assad surrendering by fleeing the country. How has it felt to see real-life events play out as the exact opposite of that segment of your 2006 novel?

The carnage in Syria is appalling. The invasion of Iraq now seems to be at least one factor in the burgeoning regional sectarian war that threatens millions of people. Almost everything the neo-cons promised in the run-up to the Iraq War has failed to materialize, or at least it has materialized in tragically disappointing ways, a failure of real life to conform to fantasy that was evident well before Disorder was published.

Since you raised the issue about my use of history in the question above, I should note that my novels, and much of my short fiction, exploit the notion that we’re often mistaken — and the more grandiose the ambition, the more revealing our mistakes may be.