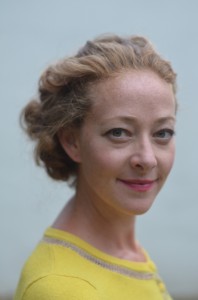 Ramona Ausubel’s prose, concepts, and stories: they’re the kind that make a reader stop, take a breath, and reread. Her lyrical story collection, A Guide to Being Born, shepherds the reader through portraits of families, parents, pregnancies, births — and invites some unconventional, mind-expanding material along for the ride. Bound by their collective humanity, the stories re-infuse wonder into a somewhat overwrought cultural conversation. Human lives springing from one another. There is something inherently magical in it.

Meredith Turits: I’ve read that you worked on all of these stories before doing the heavy lifting for your novel, No One Is Here Except All of Us. How did the experience of going through a novel cycle affect the outcome of the stories in A Guide to Being Born?

Ramona Ausubel: I think all of them were in existence prior to the novel, but I would come back to them to save myself from what felt at the time like an endless spiral of what felt like not going anywhere good with the novel. Writing a novel takes so long and there’s such a period of having to keep the faith because it just takes a really long time until the thing has emerged and you can really see it. So I would come back to the stories as these little resting places where, even if they weren’t finished, they were there, and they were a present, and I could trust that I would do many more drafts before I finished them. But they were living things, and the novel felt like this kind of scary, sloppy place, and I didn’t know if it would come together.

I love that about short fiction. There’s more pleasure in there, more quickly.

The stories in the collection strike me as varying in their deliberate trajectories and directionality than others. Do you think short fiction always must have a defined trajectory?

No, I don’t think so. Because of the length, even if the story is just asking a question, since it’s only a few pages long, it asks it really pointedly. I think even if [the story] is opening up to something that’s sort of a blankness, the reader feels like they’re given that really specifically. In longer works, you kind of meander through and you’ve got a bunch of different feelings and different themes, which is beautiful too, but in a short story, you’ve been handed this thing that’s so distinct. It’s so edited down that it feels pointed.

In regards to the short story as an art object, how do you feel about stories existing in virtue of linguistic or semiotic brilliance instead of having a direction?

I’m always good with linguistic brilliance. [Laughs.] I love that no matter what. I love stories and I love the way an arc of a story will work on you, but there’s something about language that to me is so special, and I feel like it goes right past all my logical brain workings. It feels like a drug. It’s a little shot of something and it jostles everything around, and I love that. I love Ben Marcus, I love Lydia Davis—give me those writers and I’m happy.

Have you always written and read for language?

Yeah, I have. I wrote and read poetry for many years before I wrote prose, so that’s
where I learned everything I know, and that’s kind of the thing that feels the most pure.

What were your strongest fantasies and thoughts from childhood, and how did they influence the collection?

I love this question. I was definitely an imaginative kid, and I didn’t get a sibling until I was eight and a half, so I spent a lot of time on my own or with an especially close friend. I lived in the country, so we would do a lot of wandering around in the mountains after school. I’d make stories up — a lot of these odds and ends crept in… I think I still feel really interested in characters that act upon ideas or some sort of imaginative scenario, even though I’m not brave enough to do that. But I think that’s sort of seeded in childhood — the idea that you can go out and try something, and watch the world react to your emotions.

Do you think you had any illusions from childhood about pregnancy and birth that made it into the collection?

Who could not? It’s such a strange situation, the idea that two people take their clothes off and mash around for a while and later a completely new life comes to be. That’s always seemed completely amazing to me. I do remember my mom being pregnant with my sister because I was big, so I understood the concept. And I was there when she was born, and I’m sure that made an impression on me.

You’re a mother now. When you were a child, did you always envision yourself in that role?

I definitely did. I imagined the rules I would make for my kids, and it would be totally fun all the time. . . When we got to the point in my later-twenties when having a child was a reasonable thing to do, it became much scarier. It went from being, “Yay, I can’t wait until I get to do that,” and being part of a family with new little people, to, “I don’t know if I’m up for that—that sounds a lot of responsibility and a lot of weight to hold.” I think a lot of this book is about that weight of love, and how much it asks of us. And that choice to make a person your whole entire life: the way you transform and are upended by it.

Are you maternalistic about your work, too?

I’m protective of the work when it’s not done yet. I don’t show people anything until it’s formed and living. I do have a reading group, and friends, and I do show things to PJ [Mark, my agent] eventually, but it’s not until I think I can see things breathing very well, and then after that — once I’ve gone over the stories forty million times — that I love to send them out in the world to have their own lives. It’s surprising how much I don’t feel controlling about them. Their job is to go do something else. I’ve done everything I can do with them, and then they go out and do whatever they feel like doing.

What kind of influence has your own motherhood had on your stories? Has it changed any of your visions or illusions about the process of being born?

Yeah, it’s hard to even put into words how vast it is to be a mom. It’s a completely gigantic experience, so in that way, it’s exactly like I thought it would be, but it’s also like I got a completely rewired heart. The best part about it is that I get to love this person in a way that I didn’t know I was capable of. There wasn’t an agreement about whether we were going to be in a relationship together. We didn’t have to hash those rules out and we didn’t have to grow it like when you fall in love with somebody — which is also huge and amazing, but is something that’s made by adults. Whereas the feelings I have for my son are just hard-wired. It feels like it’s part of my body, in a way.

How has that discovery — relearning your world and opening yourself an entirely new kind of relationship — manifested in these pages?

Motherhood hasn’t changed these pages, since the stories were fairly well finished before my son was born, though I’m sure this new relationship with the world will influence what I write in the future.  There are sad things that happen to children in both A Guide to Being Born and No One Is Here Except All of Us that I would have had a much harder time writing now that I’m a mom. Maybe I’ll struggle to resist the impulse to save all my characters, but at the same time the extra-exposed nerve-endings also feel like a good thing for a writer.

In the collection, we spend a fair amount of time with the perspectives of children. Was that a natural voice for you to inhabit?

It must have been, because I kept doing it without meaning to. I didn’t have a plan for the collection in the beginning. I just started writing, and it became pretty clear that there were themes emerging, and themes that I was really interested in at that point.

The book is divided into four parts: Birth, Gestation, Conception, and Love. Why “Love”?

When I was organizing the collection, I wanted to ask the question of how to press the issue of this transformation, so all the stories have this component of transformation or mutation, but I wanted them all to ask that question together, as a chorus. I thought, “Well, what if the book took the shape of a birth?” It felt like, you have to start with love. Although, some of the stories — like, for example, in the story “Atria”. . . the child is not born from love. The question of love, or its absence, has to enter the equation, so you can’t have a transformation without asking where love was in that moment: whether it was directly involved, or its absence. That’s what it all comes back to.