How To Think More About Sex – Alain De Botton 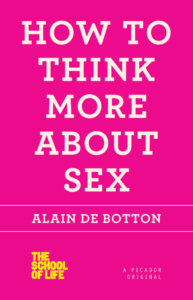 There are a lot of ways to go to war against sex and to champion repression. Because sexual freedoms depend on clear thinking about sex, these attacks always have a strong ideological component. Religious leaders have used The Almighty to shame the body. Psychologists have reduced vast regions in the landscape of desire to mere pathology. Evolutionary biologists and anthropologists have claimed that there is nothing essentially human about sex; that the natural male instinct is toward animalistic violence and rape, the natural female instinct is to be dominated.  Certain feminists have claimed that the act of heterosexual sex is itself an act of aggression against women.

One common feature of these attacks on sexuality, sexual liberation, and clear thinking about sex, is that they present at least one component of their arguments as self-evident. A simple example of this can be found in attacks on pornography, which often angrily and urgently detail the sexual acts in the scene — threesomes, foursomes, the use of fetish objects, rough sex, etc. — but offer little explanation as to why we should be outraged by portrayal of these acts, hoping instead that whoever’s listening will have an automatic sympathy with the critic’s unthinking revulsion.

These arguments of unearned self-evidence are expressions of how tangled up our prejudices about sex have become with our philosophies. A prejudiced attitude against sex, bred by continuous attacks on it by many different cultural-ideological institutions, often lies beneath what may seem at quick glance to be sound reasoning.

Even though (for most of us) sex is as much a part of life as eating and breathing, there’s pressure to believe that sex requires a special (usually strict) moral code. Rather than being a basic human right, sex becomes an “issue” to take sides on. Another example from the world of sex work illustrates this: those who excoriate porn or other sex work tell us that sex workers are “exploited” by pornography studios or strip club owners, but don’t extend their worries to bankers, retail workers, farmers and others who are exploited by their bosses when profit trumps humanity. The truth is that, like workers in any field, some sex workers are exploited, while many others are not, and the roots of that exploitation have far more to do with economic attitudes than sex. When it comes to sex, shallow arguments are put forth quickly, in an almost kneejerk manner, and obscure our prejudices. So considering sex seriously often requires thought of a higher order — thought that observes where thinking and prejudice are entangled.

Pop philosopher Alain de Botton’s How To Think More about Sex may inspire us, as it promises, to think more about sex. But Alain de Botton doesn’t think much about his own thinking, nor does the book encourage the reader to. How To Think More about Sex is the first US-released “School of Life” book, a series created by de Botton as an extension of the philosophy school of the same name that he started in London in 2008. In the book, sex is “fundamentally disruptive,” “demented,” “bound up with cruelty, transgression and the desire for subjugation and humiliation,” “inherently weird,” “confusing,” and “in conflict with some of our highest commitments and values.” All this in the first five pages, and it’s only downhill from there.

In fact, sex never achieves a status higher than “useful” in the book, even when we’re asked, briefly, to “detour” into the world of sexual pleasure. Pleasure here is just foreplay before the main event: bemoaning all the problems that come with sex and sexual freedom.

The reason for this is clear early on. For de Botton, sex is not a giving capacity; it isn’t valuable in and of itself, and it doesn’t add to life through its own merits. Instead, sex is a means to an end. One end is procreation. The other — more thoroughly examined in the book — is the temporary relief from loneliness. The result is — and Alain de Botton doesn’t seem to have noticed this — that How To Think More about Sex is a book that is far more about loneliness and alienation than about sex itself. Because alienation is the book’s main concern, and because de Botton tells us that we all feel alienated by sex, the book is permeated by and never quite shakes the feeling of Original Sin; in other words, he assumes we all start from a fallen place, since we are born into loneliness. He asks us to reconsider our alienation, and believes that it can even be seen as a triumph. But his way of going about this is by demonizing sex. When he writes about the ordeal of impotence, for instance, he tries to convince us that impotence is “an achievement of the ethical imagination,” because it excuses us from the imposition of initiating sex. Impotence is a gift of civilization that can stop us from giving in to the “free flow of animal impulses.” Aside from the fact that impotence often occurs after the sex act is initiated, we might find ourselves questioning how Alain de Botton drew this and other conclusions in How To Think More about Sex. He states that the cultural history of impotence “deserves one day to be written up.” A few quick Internet searches will reveal that it has been, several times. But How To Think More about Sex is striking in its lack of historical context or research.

To introduce us, in the book’s worst chapter, to the “poison” of pornography, Alain de Botton brings us his thoughts via his favorite Greek, Aristotle. He writes,

“Nobility, as Arisototle conceived of it in the Nichomachean Ethics – ‘the full flourishing of what is most distinctively human in accordance with the virtues’ – has surely been left far behind when an anonymous woman somewhere in the former Soviet Union is forced onto a bed, three penises are roughly inserted into her orifices and the ensuing scene is recorded for the entertainment of an international audience of maniacs.”

One wonders if Alain de Botton has read anything about Greek culture. He might have at least tried to indicate Greek sexual attitudes and their graduation into all-pervasive sexual imagery in ancient Rome. He avoids the historical context of sexual imagery all together. For him, pornography is severed from history and starts with the Internet.

Instead of using cultural context or evidence to impress his point of view on the reader, Alain de Botton has two strategies. His first is to gather little bits of evolutionary psychology, Freud, art criticism, religious thought, etc, creating a strange blend of idea-dropping and argument from authority. His conclusions are generally conservative and superficial.

One of his solutions to pornography, for example, is censorship. Just a little bit, he promises us. Far from lending comfort against reasonable fears of a slippery slope, though, he turns to Islam, because, “Only religions still take sex seriously.” He juxtaposes a photo of women in the hijab with one of women sunbathing in bikinis and writes:

“Secular societies have no problem with bikinis or sexual provocation because, among other things, they do not believe that sexuality and beauty have such extraordinary power over people.”

It’s unclear how Alain de Botton could make such a statement after writing up till this point that we are constantly in the sway of sex — unless he thinks that only he and Muslims are aware of it. But that aside, he’s wrong. It’s not that we don’t take sex seriously in secular societies. We do. Rather, it’s that our cultural strategy for dealing with sex has been progressive; we’ve decided to share the burden of its exposure, collectively. We live with sexual imagery and skimpy clothing because we’d rather contend with the weight of some of our sexual feelings out in the open. This has some drawbacks, but none that equal the drawbacks of censorship and repression. It is a step forward, and one that was and is taken quite seriously in legal and cultural struggles.

Alain de Botton’s other strategy to impress his point of view on the reader is even more bizarre: He constructs stories about fictional people who behave — surprise! — just as he’d expect them to according to his theories about sex. These stories range from the exhaustingly bourgeois, to the utterly unnecessary — one character recounts when she and her sister were in Barcelona where “they visited a pavilion designed by Mies van der Rohe and ate in a restaurant that specialized in seafood with a Moroccan influence.” In each, he details his characters in a state of sexual longing and frustration. Then he goes on to state his philosophical views, using the created characters’ created lives to back his views up. It’s a confusing gesture. Perhaps these stories are meant to be some sort of philosophical thought-experiment. But there is no room for the reader to consider his or her own interpretation, so it doesn’t feel like a thought-experiment, it feels like de Botton is trying to construct the appearance of substance out of nothing. Like psychologists who analyze behavior or biologists who describe organisms, Alain de Botton claims to have uncovered real motivations for lust and longing. But unlike thinkers in those disciplines, he doesn’t give us the benefit of case studies or observations from nature; he simply makes things up. Is this philosophy or just plain narcissism? It’s hard not to think that this a book written to justify and merely excuse prejudice rather than investigate it.

Perhaps one might argue on Alain de Botton’s behalf that this is all too harsh and that to take him so seriously is to miss the point. It might be said that the book should be seen as full of exaggerations, of wry tricks meant to provoke thought. But when it comes to sex, the cultural moment is always a precarious one. Our rights to do as we like with our bodies are always on the line, always threatened by the attacks mentioned at the outset of this review and contained within How To Think More about Sex. It’s all well and good for someone to write clever books about philosophy, and for the same author elsewhere to broadly examine the implications of aesthetics. Alain de Botton has done that well and cheerfully — if not with total consistency — in other works about airports and architecture. But when an author starts a school to spread his views (that charges upwards to £600 for some classes); when that same author begins to draw up a forceful code of ethics that ignores many of our hard-earned freedoms and asks us to erase others; when his unthinking reactions masquerade as thinking “more”; when he asks us to cover up, to feel ashamed, to accept unhealthy feelings; we shouldn’t listen to him, and we may find it hard to ever forgive him.