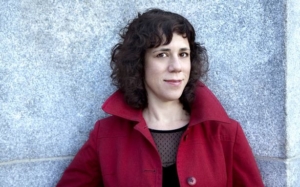 Jami Attenberg’s fourth book, The Middlesteins, is the story of one suburban family’s slow unfurling. Edie Middlestein has sought comfort from food throughout her life, and her health has been declining for years — she’s in the midst of multiple surgeries when her husband, Richard, suddenly leaves her. Every member in the large cast of their children and extended family member weigh in with opinions and concerns, and their interventions often deeply affect their own lives. Central to the story is an exploration of the different ways we all come to relate to, rely on, or feel repelled by food.

The Middlesteins is compulsively readable and downright fun, which belies the depth and heart of Attenberg’s story: her characters are complex but always endearing, and her insights into the loving yet dysfunctional family are so apt that they’re almost painful. As the book moves towards the (retrospectively) inevitable conclusion, the messy ways in which we all attempt to take care of the people we love echo throughout her pages.

I got the chance to sit down with Attenberg at a Williamsburg taquiera in the aftermath of Hurricane Sandy. We discussed her book’s sudden success, writing about places she loves, different ways of relating to food, the first person plural, and whether her work as a bookseller informs her writing.

Amy Kane: The Middlesteins is your fourth book and it’s been the one that’s gotten the most press and attention. What do you think has made the book industry and readers respond so enthusiastically?

Jami Attenberg: I feel like there’s no way to really answer that question. Maybe it’s that people are interested in reading about issues of weight and maybe it feels like a bigger or broader or maybe more American story. I’m only guessing, because I can’t be in the heads of the readership, but I can say I’m very excited more people are reading my books and that it’s gotten such a positive response, and I’m very grateful for that.

If I knew what it was, I would just do it all the time. You know, put it in a bottle and write something that would appeal to everyone all the time. But it doesn’t always work that way.

The Melting Season and The Kept Man both are about characters experiencing things that you haven’t gone through yourself, presumably — having a husband in a coma or being a woman on the run. You’ve written in The Hairpin about being heavier growing up and, like the Middlesteins, you’re from Chicago. Does this story feel closer to your own life experiences than your previous stories?

You know, all of my stories have autobiographical elements. There are things about myself in all of them. Even though The Kept Man isn’t my personal experience, it was set in Williamsburg, which is the neighborhood where I live, so it was a love letter to that place and so it was personal in that way. And The Melting Season was set in Nebraska where I’ve spent some time, and even though I didn’t feel like I was that person, there was anther character in the book that I really identified with, and I enjoyed her voice and writing about her.

With The Middlesteins, even though these characters are not me or anyone in my family, it’s definitely about the community where I grew up. I think I start with place usually. I start with characters too, of course, but it’s a lot easier for me to write about a place I’m familiar with. And I’m such a traveler, and have driven across country many, many times. . . I really feel immersed in America and am very fond of it. I like a landscape, I will say that.

One of my favorite aspects of your book was your sense of place. I felt like I was in the car with Edie or Rachelle, driving past all the strip malls in the suburbs outside Chicago. What’s your process for evoking in writing the places you love in real life?

Sometimes I take pictures of places, which helps, and then I look at them later. I definitely go to the places themselves — when I was writing The Middlesteins I did take a trip home to Chicago and took the train and tried to see things in that way, through Robin’s eyes. I just try to picture myself there. I don’t know what the trick is, really — I just kind of close my eyes and hope I describe it right.

People have a lot to say about the relationship between weight and health. I’m thinking about the fat positivity movement, in particular. In Edie’s case, her health and weight are very directly related to her over-eating and how much she consumes. What have the responses been to her portrayal?

Because it’s only been out for a little bit, and I don’t really read reviews or comments on websites, I haven’t seen that much. But I usually get the gist of it; I have friends that will read the reviews or I happen upon a headline, so I have a bit of sense that there’s a discussion going on. I’m hesitant to really step into it, but I know that it’s a really complex issue and you cannot please everyone. It’s very personal. I just tried to handle it with sensitivity and compassion. I identified a lot with Edie and felt like everyone in the book in little ways here and there. I can identity with the feeling of wanting to eat and eat because you can’t ever feel full, but I also can identity with things being complicated for Rachelle — where she doesn’t want to eat, or is obsessing and thinking about it in another direction.

Like how she tries to control what other people are eating?

Yes. Well, I don’t want to control other people, but that idea. And I also identify with Bennie, who just wants to share a nice dinner with the family — so I feel like I get all of it and see all sides of it. And that’s the responsibility of the writer.

. . . I didn’t sit down to write a book where people were going to be like, “Let’s use this as a talking point.” I sat down to write a book because I this was the story I had to tell, these were the characters I was interested in, and they felt very real to me the entire time I was writing the book. And, as a lot of writers will tell you, at some point you’re not really writing the book any more — the characters are just sort of telling you what to say. I think it’s good to have discussion, and I just hope people will actually read the book and know that I meant things in a positive way.

Did you find it cathartic to write this book? Or that it gave you a chance to explore all the different facets of how people relate to food?

Yeah! It was cathartic in that way. It was also really cathartic to explore the issues of faith and explore the way families communicate with each other, because I think that is really the core of the story. I do find people are keying in on the food elements because it’s something that everyone deals with. You have to eat food every day. You may not have to question your faith every day or talk to your family every day, but two to three times a day you’re going to face the food. All of it was cathartic for me, though, and all of it was a joy to write.

I loved all the different relationships between the family members — how fraught and loaded but also loving their reactions to one another were. Did you have a good sense going into the book what the dynamics between the characters would be, or did that evolve and take on its own life as you went along?

It definitely evolved. I wrote my way into liking all these characters. They’re all kind of complicated and flawed, and I wanted to understand that.

Yeah, I always had a sense that you liked the people you’re writing.

I wasn’t sure the whole time. I think my most complicated relationship writing a character was actually with Richard, because I was trying to understand how somebody could leave a sick person. And then I understood it. By the end of the book, I got it, and I was trying not to judge him.

The culmination of the plot is centered around a Bar Mitzvah, and a lot of the book feels like it’s moving toward that point. What were the reasons for writing the Bar Mitzvah chapter in the first person plural, from the perspective of a table of the Middlesteins’ friends?

Throughout the book I had heard all those voices chattering at me and didn’t know what to do with that. I kept thinking they were going to go away. I don’t know if it was so strategic on my part, I just wanted to see what these people had to say. But then as soon as I started writing it, I thought it would be a good way to pull back and show everyone and set everything in relief. It was a way for me to let in my Jewish-Greek chorus and really pan back to reflect on everyone in a broader way. I liked the way it turned out, but it was hard! When I was writing that chapter I thought, “Damn, Josh Ferris. I’m really impressed.” He wrote a whole book like that.

Robin spends the year teaching in New York City, hates it, gets bed bugs and leaves after one year. It was funny to read that while knowing that you are a die-hard New Yorker yourself. What were your reasons for creating such a hideous New York experience for one of your characters?

It’s a pretty standard experience for people here, actually. I’ve had people who have done the Teach for America program come up to me after I’ve given a reading and just be like, “Yeah, you’ve got it,” even though I didn’t do it myself. When I started the book, she felt a bit like an alternate universe version of me and I was thinking, “What if I had moved to New York and just given up on it?” You either make it here or you run away — sometimes wisely — and leave New York behind. Even though I love Chicago, I don’t think that was ever really an option for me.

As a bookseller yourself, do you think the way you write has been shaped in any way by what you’ve learned on the ground about the bookselling industry and what excites people about books? Do you feel pressure to write in a way that’s marketable or does well as a sound bite?

I don’t know if it’s shaped my writing, because I was writing before I became a bookseller. I’ve only been doing that for a couple years, although I worked in libraries in high school and college. It really restored my sometimes waning faith in the book industry to connect with people who just love books and not have it be about anything other than a community of readers. It infuses me with enthusiasm, and seeing people get so excited about it makes me want to write books that they will love.

I try to write things that are very readable. Anytime someone tells me they’ve stayed up all night and read my book, I feel like I’ve triumphed. Whether or not they liked it, I just want them to read the thing in one gulp.