A Review of Warrior (Album Commentary) by Ke$ha 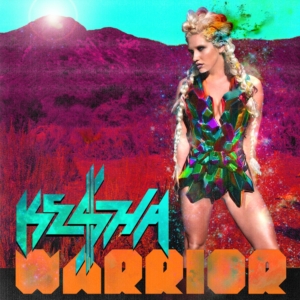 Have you guys seen this thing Spotify is doing with commentary albums? They ask (pay?) Top 40 artists (fun., Christina Aguilera, Pink, etc.) to talk about each track on their new albums. Ke$ha (or, as The New York Times calls her, “Kesha”) released a commentary album on Spotify for her new album, Warrior; it’s approximately ten and a half minutes of Ke$ha talking and it’s fantastic.

The album opens with Ke$ha introducing the idea of a commentary on all of her album’s songs. She promises to explain, “Where they all came from. What they all mean.” Ke$ha equates a song’s origins with its meanings, here, which is in tune with the nihilistic, live-for-the-moment thematic content of Warrior proper.

27 seconds into this 42 second track, you can hear a light clanking, the sound that a spoon makes against the edge of the porcelain mug. This clank lends a welcome warmness to the proceedings. Less than a minute into the album, and Ke$ha has used a subtle yet familiar sound to develop a sense of intimacy with the listener. Close your eyes and she shifts from a disembodied voice to a conversation partner, someone you are chatting with over a cup of warm tea.

The clanking aural motif returns just seconds before Ke$ha explains she and her album’s producers (she uses the word “we”) chose “Die Young” as her first single from fifty songs Ke$ha (she uses the word “she”) wrote. Recalling the intimacy of the previous track by repeating the clanking, the listener empathizes with Ke$ha at having to make such a difficult decision. Ke$ha soothes the listener with a fragment of her Pop Star Nihilism: “It’s all about how you should live every single day and every single night as if it’s your last.” The staccato repetition in “every single day” and “every single night” lulls the listener as rocking lulls a crying baby. Having drawn us in and calmed us, Ke$ha continues.

Ke$ha reveals that your favorite lyric on the album — “Feeling like a saber-tooth ti-GRR/ Sipping on a warm Budwei-ZERR” – is also her favorite lyric. The sense of closeness deepens.

About “Thinking of You”

Ke$ha continues to take the listener into her confidence, describing an emotional break up with “somebody,” who cheated on her. Those feeling raw after hearing this tale would be wise to switch over to Warrior and listen to “Thinking of You,” one of the album’s best tracks, which very much is about, as Ke$ha puts it, “sweet revenge.”

Opening the track with another breathy staccato — “an ANTHEM, for PEOPLE, like ME” — Ke$ha then segues into a narrative about her recent birthday party, which is good enough to repeat: after a night of drinking and making out with a bunch of “dudes,” at about 6 a.m., “I got the word ‘fun’ tattooed on my foot. Forever. Because I am fun.”

“About ‘Crazy Kids,’” is perhaps the most exciting track on this album.

About “Wherever You Are”

Ke$ha describes “Wherever You Are” as a version of a nostalgic road song. She sounds like she’s describing the Cat Power song “Ruin.”

Ke$ha: “I love this song because we are just screaming about sex.” Ke$ha continues to use two words in places where most people would speak in contractions; she does so by shifting where the emphasis would normally fall when an American English speaker talks. Most speakers would emphasize “we” “just” and “scream” in the middle part of that sentence. Ke$ha emphasizes “we” “are” “just” and “scream.” This seems intentional.

“About ‘Dirty Love’” is the shortest track on the record, but one of the most riveting.

During “About ‘Wonderland,’” it becomes apparent that Ke$ha is using this commentary album as a thematic foil to Warrior. In the musical album, Ke$ha sticks closely to the aforementioned Pop Star Nihilism, setting most of her songs on a single night, a night which is presented as possibly the last night of the world, or in our lives. Although the Pop Star Nihilism crops up on Warrior (Album Commentary), Ke$ha spends much more time cultivating a sense of nostalgia by telling stories about her own recent past, as she does on “About ‘Wonderland.’”

Ke$ha tells us that “Wonderland” is about a time long past, when she was living in a “flophouse” in Los Angeles with all of her friends: “…when I used to live here, when I just was living a very listless, wild, and completely free life here. And all of my friends. And we were so young. And just idiots, and drunk, and didn’t have a care, didn’t give a fuck. And since I lived there everybody’s lives have changed.” [emphasis added].

If Warrior is all about living in the (possibly final) moment, Warrior (Album Commentary) is about all of the moments that brought Ke$ha to her possibly final moment.

About “Only Wanna Dance With You”

This track kicks off the latter quarter of the album, which Ke$ha devotes to discussions of her craft. Ke$ha talks writer’s block and the way she surmounted it, by throwing out all the lyrics she had written, and starting afresh. As Ke$ha confesses her difficultly in writing the lyrics for “Only Wanna Dance With You,” the clanking motif returns, again inspiring empathy.

The craft discussion shifts to melody and music; Ke$ha talks about how much she enjoys “singing her ass off” in the chorus of “Supernatural.” She also relays her inspiration in crafting the story for “Supernatural”: having a somewhat sexual experience with a malevolent in her aforementioned “flophouse.” Ke$ha then talks the narrative layering effect she’d like to invoke with the lyrics of the song: “But it also parallels and could be about a really toxic relationship, if you wanna take it there. But for me its about getting it on with an evil ghost.”

About “All That Matters (The Beautiful Life)”

Ke$ha’s now addresses the craft of the recording process and gives an acknowledgement to one of her closest collaborators, Max Martin.

About “Love Into the Light”

Ke$ha closes the commentary album with her final note on craft, how and when she prefers to write (alone, in her house).