“I have no intention of writing in the next ten years. To tell the truth, I’m finished.”

To the Members of the French Media:

Consider this my letter of resignation. I’m retiring. Look, I’ve been doing this thankless job of writing fiction for a few years now. Doesn’t matter how many. Five, maybe. But like I said, doesn’t matter. I’m putting in for early retirement while I still have good use of my back, hands, and organs. I’ve recently learned that some of my older colleagues work standing up because their backs have gone out from all the years spent seated writing. Imagine writing standing up all day like you’re filling out forms at the DMV? Others have developed carpulltunnels, a very serious and crippling disease affecting the hands, which, thank Jesus, I don’t have yet. The worst cases in my field have lost complete control of their bladders, which was probably their own fault, but still, I think you’re getting a picture of the working conditions we writers have to endure here in America.

Not me, my dear members of the French Media. Not me. I’m quitting while I’m ahead. While I can still piss on command and type out a sentence pain free while seated (even though I won’t be typing out anything, because I’ll be retired). 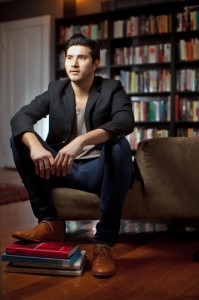 Alex Gilvarry, who is no longer writing novels, sits in front of books he will no longer read.

Now I’ve written hundreds of pages in my lifetime. Hundreds. And many of these pages have added up to a pretty decent book, one that I was willing to put my real name on. Confession: I utterly refused to hide behind a pseudonym or a pair of ambiguous initials like E.L. or J.T.—even when my publisher said they didn’t care one way or the other. You see, that is my point. In this business, no one cares. So why keep doing it when I can just retire now and save myself years of toiling between drafts? Drafts suck. They all suck until the final draft. And even that sucks sometimes.

People will say of my early retirement: “What a waste. He wrote hundreds upon hundreds of pages. He had a good handle on the English language. He possessed the ability to multitask both fiction and tweets in a single workday, something his older colleagues can’t seem to manage or refuse to try because they think they’re ‘above all that.’” But do you think I care? No. Because truth be told, I’m done.

When I turned 30, I realized my time in this position would never end. So I spent everyday since rereading “the classics.” I read thousands of pages from “the classics,” curious to see if they had dated. It was hard. Most of them hadn’t. That’s why they’re “the classics.”

Next I reread the authors that made me want to become a writer, like Twain, Carver, Rushdie, Seuss, and Obama. I wanted to see whether I’d wasted my time by following their lead. I can’t say that I regret the work I’ve done because, truthfully, I don’t look back. I’m practically incapable of it. I only look straight ahead into that wild blue yonder.

My father taught me this. He worked as an Optometrist for 35 years—child’s play by our standards—and now he collects a pension in Boca Raton and he isn’t even seventy yet. That’s what I want. And there isn’t a book advance big enough on God’s green earth that’s going to take it from me.

Sacre blue! you’re saying, in French. What about your readers? They’re waiting for your next book(s), and if they’re not, well, take solace in the fact that your audience hasn’t been born yet, like what happened to Herman Melville, who’s now considered a “classic.” Well, French Media, I don’t have to hope anymore. I’m done. Finished. Finito. Fini. Game over.

Now it’s not about the pension. There is none. This isn’t France. I’m not gaming the system here. I’m listening to my colleagues, the ones who teach in those writing programs that fulfill misguided dreams. And from what I hear coming out of their jaded mouths is that there is a new breed of writers out there who are younger and faster and who can write hundreds of pages quicker than we can, and they’re bucking for our jobs.

To these younger writers, I offer a piece of advice, free of charge. When the going gets tough, the tough should get the hell out of the way. As far as my job is concerned, you can have it. Also, be sure to read “the classics.”