Zend and the Art of Typewriter Maintenance 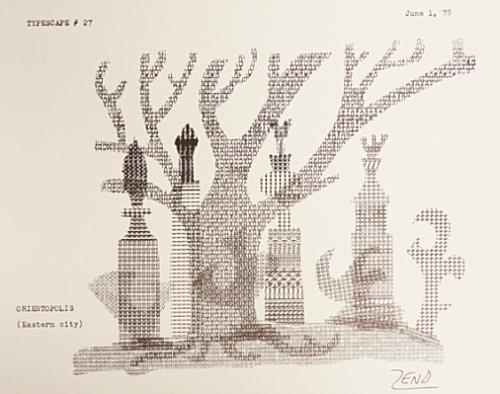 I’m not into concrete poetry for the same reasons that Donald Barthelme wasn’t into conceptual art: it seems too easy, and once you “get” it, you don’t need it anymore. But it’s a lot easier to dismiss genres than individual artists. My exception to the rule is Robert Zend.

Zend (1929-1985) was one of those versatile geniuses who could do anything. Born in Hungary, he moved to Canada in 1956 after the failed revolt and settled in Toronto. For years he worked for the CBC, at the same time making himself into a skilled producer, poet, novelist, essayist, playwright, composer, filmmaker, and found-object artist.

Something about his autodidact intensity appeals to me. Most people who call themselves by so many titles end up spreading themselves thin — they kind of suck at everything, without ever mastering one thing. It can seem pathetic. But Zend had the work ethic of a craftsman. His sober attitude toward his projects was mature. He imbued everything he worked on with rough-hewn depth. It was an attitude that’s rare in contemporary scenes where snark and nihilism are the base line and art is as much about identity as product.

As you’d probably expect from a person who was a workaholic as well as a multi-talented artist, there’s a lot of material to choose your favorite from. I can’t pick mine, there’s so much good stuff that he’s done, but if I had to make a recommendation, I’d pick “Arbormundi (Tree of the World)”. It’s a portfolio of seventeen concrete poems made on a typewriter. Of course, Zend didn’t invent typeface art and layering on a typewriter, but his are some of the best examples of how to do it. They’re meticulous, superimposing shapes and figures in a way that hints at dimension and gives a sense of fluidity. The shapes he makes express texture while still appearing delicate, urging you to reach out and feel their dimensions before they float away or disappear. It’s just great art. Look for yourself: 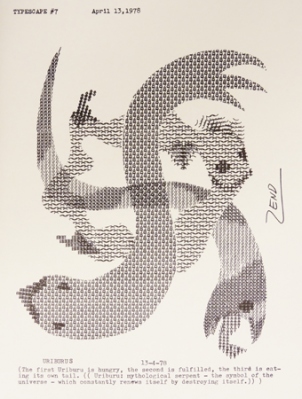 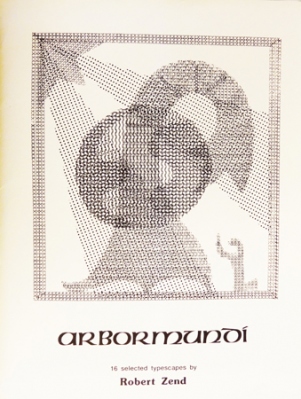 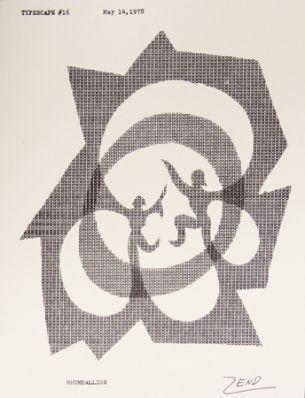 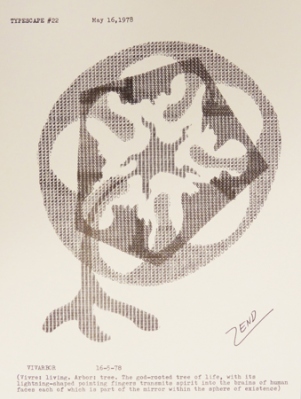