Would Sam Johnson Blendr a Biddy? 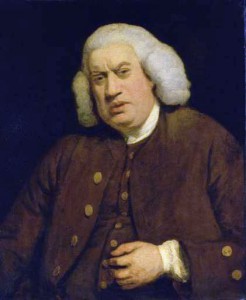 One often hears that “language is constantly evolving.” One hears this especially often from those who have their offices “headquartered in New York,” who “partner with clients to impact branding strategy,” who “live in a networked world, where consumer behavior is measured at the speed of a tweet,” and so on. Then comes the chastisement of some literary scourge, and after that the offended brander’s invocation of Darwinian principles. In cases like this I must say I do sympathize with the defendant, though I might ask him to leave Darwin out of it. Who knows how many nouns we’ve all verbed in our day, or how many jargon words, so slick and sly, we’ve let slip through? I would be a liar to say I have not emailed and gchatted, downloaded and uploaded, freestyled and freeridden; at present I suppose I am blogging.

In the preface to his dictionary, Sam Johnson writes that “[t]here is in constancy and stability a general and lasting advantage, which will always overbalance the slow improvements of gradual correction. Much less ought our written language to comply with the corruptions of oral utterance, or copy that which every variation of time or place makes different from itself, and imitate those changes, which will again be changed, while imitation is employed in observing them.” Today few hold with Johnson on this point, and fewer still believe the ossification of official words to be the purpose of a dictionary. Even the venerable OED has gotten into the business of buying and selling technological slang words at, well, the speed of a tweet. And isn’t it intuitive that we should record in our dictionaries the words we use in everyday speech?

Johnson was a republican neither in his politics nor in his English: to him, some words were correct, while others were barbarous corruptions. This idea, along with his fondness for caste systems, no doubt vexes us in our age of great egalitarianism. But the proposition that all phraseologies are created equal comes with its own perils. One is that language should become purely utilitarian, utility being communication’s lowest common denominator. A capitalist cousin to this concern is that language should go to the highest bidder. We speak of “googling” something, not because this branded and verbed noun conveys something essentially different from “search,” but because the term is seen by many of us every day on our computer screens, and conveys a cachet that the company has purchased. In this case it turns out our branding buddy is impacting things whether we like it or not.