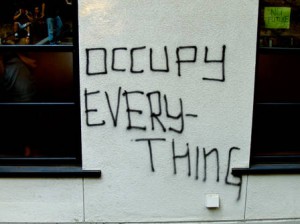 There are plenty of ways this Occupy Wall Street thing is dividing people, particularly people who get paid to write their opinions on the internet (and those who just do it for volunteer credit). Lots of these things are valid—Simon Jenkins might be right when he writes in the Guardian saying that no protest that cooperates with the law so peacefully is going to get anywhere.

And when people say the protest is disorganized—well, maybe a little. (Look at these people; apparently museums are now the 1%?) But then again, it’s a general protest. People haven’t gotten that far protesting individual issues, because in this sea of laws we live in, there are five to replace the one you get overturned, and the very thing being protested is the totality of the system of economic oppression.

Here’s what I’m going to say, and I might regret it tomorrow: if you haven’t yet, set down the irony and the criticism and the urge to write a trend piece for a minute and go occupy something. See what it feels like to be one of the masses. We don’t actually get to do this very much in the U.S. This is an event, a moment in which people can insert themselves into a historic process, whether it turns out to be the process of change from within or — and I hope not — the process of market-conditioned apathy winning out over agitation. Or maybe it’s just people tired of being divided and running in place.

It’s remarkable that one of the central slogans of this movement — “We are the 99%” — is such a collectivist one. To crib an idea from the extremely smart Amanda Shubert, the story of this movement isn’t a story about individuals, about someone being able to make it against all odds. It’s about unity across dividing lines. If you feel alienated by this movement because you’re in the wrong demographic, you’re not. Go check it out, see what it feels like. As someone at Occupy Chicago said last weekend, “You are enough.”